It’s the new Tron Roller Coaster opening June 16th at Shanghai Disneyland! Check out the video above for a point-of-view-ride on a mother f###ing Light Cycle!!

You’re a human who accidentally stepped into a beam disseminating your molecules, reforming them as gigabytes (kylobites? Megabytes?), and transferring them into the world of computer programs. This information highway is vast and expansive, but not as inviting as one would think. In fact, there’s one particular program (let’s just call him Master Control) that consistently clamps down on the free exchange of data and the autonomous functionality of helpful, independently produced programs. Master Control is very much a controlling d*ck, and anyone…..er, sorry…any programs unlucky enough to orbit its processing, assimilating influence are forced into gladiatorial matches.

Yes, that sounds barbaric, but the aesthetics of said conflicts are visually inspiring! One such match is the utilization of Light Cycles; sleek, covered motorbikes that produce solid light walls in their wake. If you’re a few comfortable yards ahead of your opponent (and to his or her right), take a quick left turn and…. SMASH! He/she kisses a barrier of hard-light exhaust! If you’re a Tron fan, riding a Light Cycle is already on the bucket list, but in this case, science fiction is in no way science fact. How does one supplement the need? Why, one could certainly ride the new Tron Roller Coaster. Errr…uh…I FIGHT (the lines) FOR THE USER! 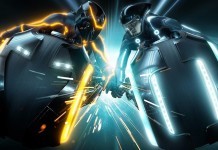