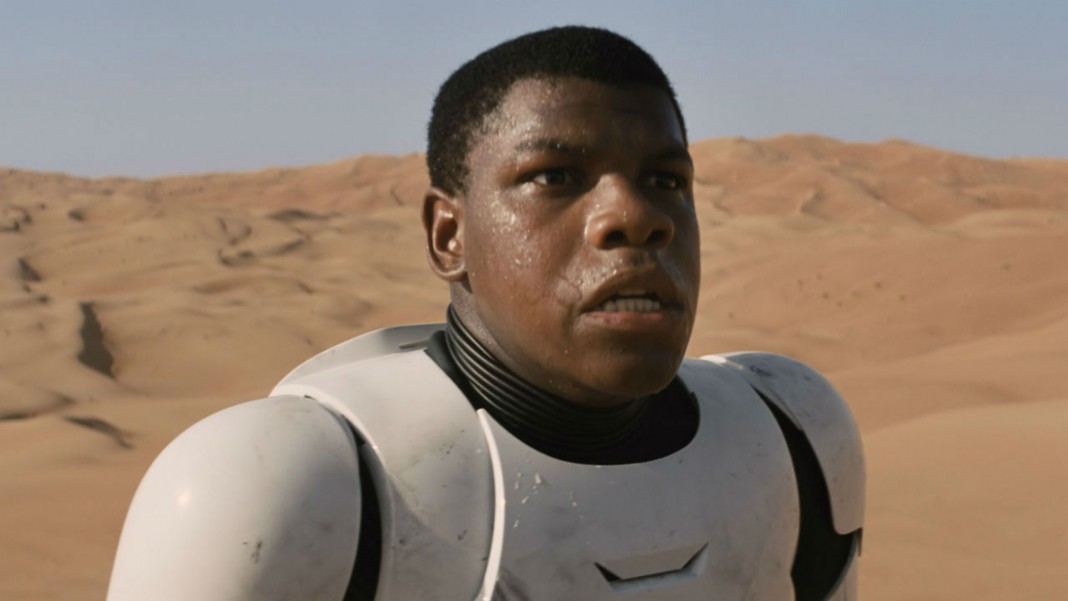 John Boyega, who plays the unlikely Stormtrooper-turned Hero in Force Awakens, recently sat down with Vogue who quizzed him on what it was like to be one of the biggest up and coming stars of the future. Perhaps that was the true reason that TR-8R got so angry with him…Boyega was stealing all of the glory! Force Awakens has set the domestic record and we will certainly be seeing a ton more of John Boyega floating around!

The first question Vogue asked regarded the secrecy of Force Awakens and whether or not John had trouble keeping certain spoilers under-wraps. “Yes, at last! Han Solo dies, OK? He dies. Phew. It feels good. But now, we just started work on Star Wars VIII, the next film, so I’m back to keeping secrets again.” Ouch. Able to talk about spoilers…and then right back into the dark. I guess he only really has a small window of opportunity to talk about his films! Regarding the next movie Boyega said, “It’s great. Much darker, but we’re very excited.”

The next question then inquired about the real-life effects Force Awakens has had on Finn to which he replied, “When I found out I had the part, the overwhelming feeling was of relief. I’d been auditioning for seven months so it was just unbelievable to think, yes, finally I know for sure I’m going to be in this film. In terms of what’s changed, my life back home in London is still pretty normal. I mostly drove everywhere around where I live even before I got that part, so that has meant my life just goes on as normal. I was in Wandsworth this morning.” Boyega then joked about how nobody has challenged him to a lightsaber duel. “No, nothing. That’s London.”

Continuing, Boyega had some moments where he was completely overwhelmed at the scope and magnitude of Force Awakens. “Most of those happened on set. Working with Harrison Ford or just seeing where we were filming that day. I was a Star Wars fan before, so there were definitely a few moments that made me think: ‘Wow.'”

How does it feel to be so universally received? “It’s nice, of course, when people appreciate any work you’ve done, but one minute you’re great and the next the next they can be saying you’re the worst thing that’s ever happened to Star Wars, so I’m not planning on letting it go to my head. Although this franchise is such a massive thing, I’ve tried my best to approach it as I approach any other job: do the best I can and just focus on the work.”

Harrison Ford heaped praise on him, and Boyega responded with, “Harrison is great to work with. It’s hard not to admire him, not just as an actor but as a man. He’s built an incredible career and being on set with him and learning from him is brilliant. Our characters had quite a lot of scenes together so it worked well that we had a good rapport.” Not only does Boyega have Harrison Ford keeping an eye on him, but he also had Robert Downey Junior helping! What is that like? “We’ve never worked together but the industry is pretty small. I have lots of people around me who’ve supported and helped me so much and I’m very fortunate that Rob has been one of them.” Sounds like John Boyega is a pretty interesting and humble figure and we all look forward to seeing the next installment of Star Wars!