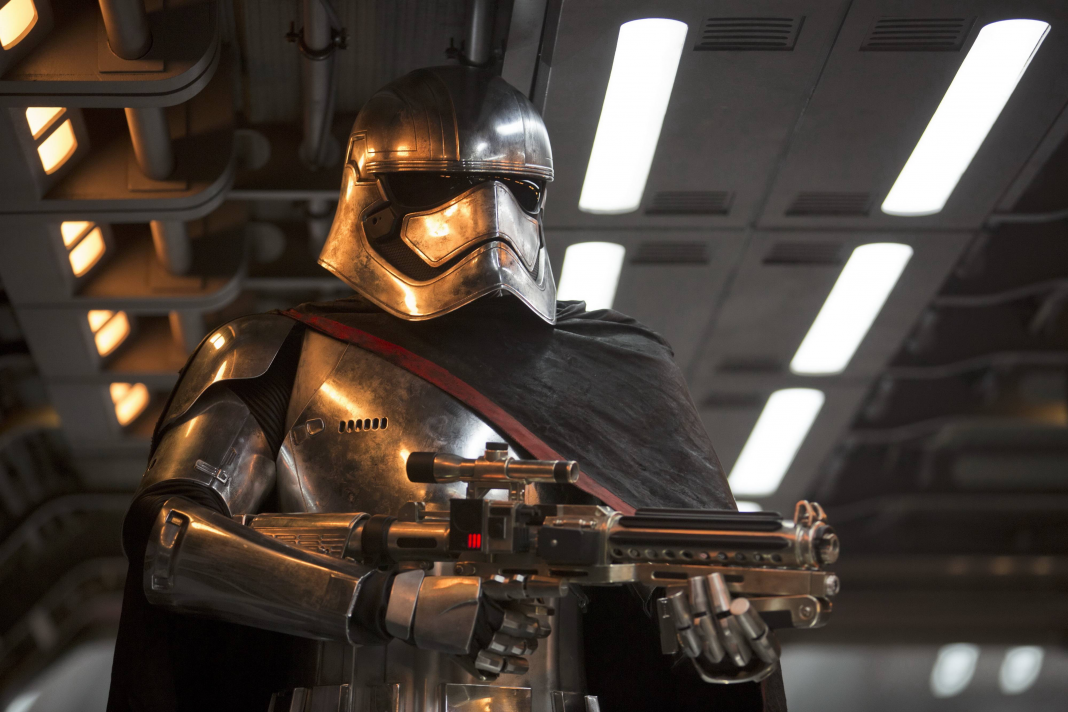 It appears Captain Phasma is not done with her work in the First Order. Actress Gwendoline Christie confirmed on the SAG Awards red carpet that her chrome Stormtrooper commander will be back for Star Wars Episode VIII.

“I will be in the next Star Wars movie. I think that’s an exclusive, actually.” Christie told People Magazine.

This should be awesome news. I mean, one of the coolest looking characters in Force Awakens is getting another shot on the big screen. So why doesn’t this feel like a big deal? It could have something to do with how Phasma was used in The Force Awakens.

(Spoilers are coming… so this is your warning!)

Months of promoting the film put Captain Phasma front and center; so much merchandise was focused on the character. The silver Stormtrooper was supposed to be this generation’s Boba Fett, but much like the Fett-man, Phasma barely had any screen-time. Worse, her character had such a small (and awful) impact on Episode VII.

The highlight of Captain Phasma was shutting down the shield on Starkiller base (you know, instead of standing her ground or doing anything else!). Then, she was tossed in a trash compactor… and that was it, never to be heard from again. (*sigh*)

So now with Christie donning the armor once again…Well, let’s hope Rian Johnson gives her time to shine. In fact, here are a few better ways that she could be used.

-LET HER BE THE PRIMARY VILLAIN-

I know. Kylo Ren is our big bad Sith. There is also Supreme Leader Snoke and the mystery character Benecio Del Toro is playing (that could very well be a baddie). So with all these antagonists already in play, why force Phasma into the forefront?

Because we need more female villains!

Think about it. Not since Asajj Ventress has the Star Wars Universe been given a solid woman heel, who’s not afraid to kick a little ass. By bringing her into the primary foe-spot, you can let Gwendoline Christie show off her Game of Thrones fighting skills. Imagine her going mano-a-(wo)mano with Luke Skywalker. Even Christie mentioned the importance of Captain Phasma being a female when talking with People.

“I felt it encouraged diversity and it was doing something new and it was an interesting bit of casting for women, and I hope that in something that was such a mainstream success it would breed more of those kind of opportunities for other women.”

The opportunity is there for Captain Phasma to steal the show (like she should have in Force Awakens). We don’t need more emo Kylo Ren… we need an iron-fisted Phasma.

-LET HER TAKE COMMAND OF A FIRST ORDER KILL SQUAD-

So if Captain Phasma won’t become the next great villain, at the very least give her a proper mission. Let her be the head of a First Order unit with the sole purpose of killing Finn.

It makes a ton of sense; the First Order should despise desertion. Phasma should have extra hatred towards Finn since he was responsible for humiliating her by tossing her in a trash compactor. Give her a crew of some of the rowdiest members of the First Order and send them out to hunt down the traitor Finn and bring him to Imperial justice. Captain Phasma randomly appeared in The Force Awakens, so let’s give her an actual purpose in the next installment. Come to think of it, you can even team her up with this guy…

-LET HER JOIN THE RESISTANCE-

Ok. So you’re not going to make her the true villain, and you also don’t have time to give her a proper mission for the First Order in Episode VIII. So what’s next for the silver Stormtrooper? Why not let her just join the Resistance.

Instead of letting her track down Finn… let her be inspired by him. She can grow tired of Kylo Ren’s childish outbursts. Maybe gets heated after being demoted by Supreme Leader Snoke (remember she did lower Starkiller Base’s shields without putting up a fight). Let her get so pissed at the First Order/Empire that she goes rogue and agrees to help the resistance.

At the very least, you can nickname the combo of Captain Phasma and Chewbacca, “The Twin Towers.”