Home MOVIES I Am Major: A Ghost in the Shell Movie Review 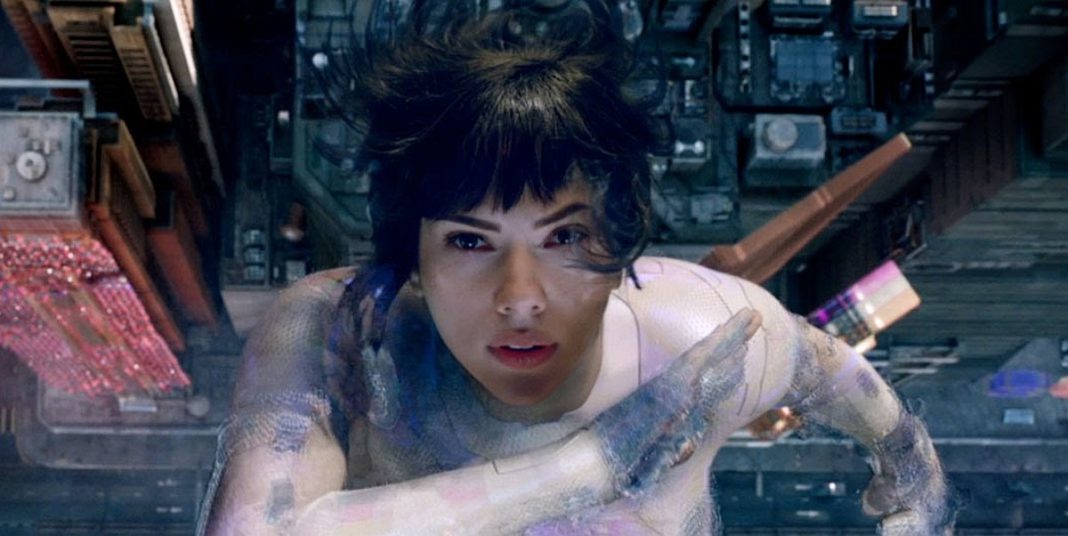 Amidst all the backlash and the racial issues, Ghost in the Shell bursts through the cinemas as explosively as the Major does in the film’s first action scene, with glass shattering and guns a-blazing. Does the live-action adaptation look as badass as its source material? Absolutely. Does it boast quality content as much as it does its stunning visuals? We’ll see.

To judge Ghost in the Shell without addressing the elephant in the room — Scarlett Johansson’s casting as the Major — is just irresponsible, so let me get right to it. 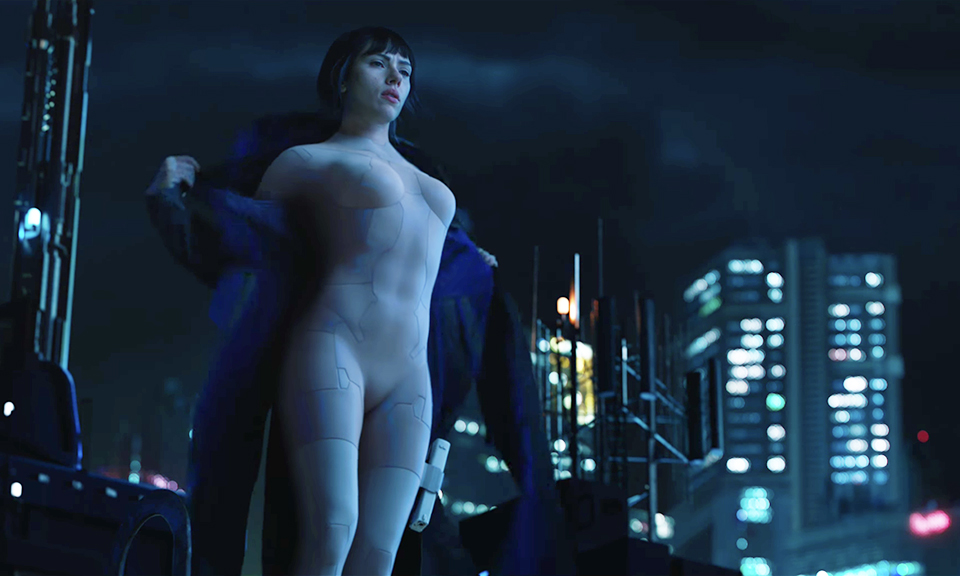 She’s just…amazing. Honestly. She’s somehow gotten the hang of playing supposedly emotionless characters with subtle hints of emotion underneath the outer bravado, and because the Major is not quite cyborg but not quite human, Scarjo’s awkwardness, curiosity, and take-charge stance in the film just adds to the character’s complexity—that and the fact that she fits the Major’s clothes perfectly.

As a fan of the original series, I was one of the initial haters of this adaptation, and I went into the cinema thinking something like, “This movie is going to suck so bad it’ll make me lose faith in humanity.” But once I got over all my eye-rolling at the obvious whitewashing, I actually found the film quite enjoyable.

Perhaps the beauty of the movie is in its little nudge-nudge scenes that are pure fan service. From the first scene incorporating Major’s milk-bath “birth” underwater to all the naked jumping from tall skyscrapers (let’s have more of that, please), Ghost in the Shell knows that it should pay homage to its source material just because the original series was so darn good.

The visuals of the dystopian future that is New Port City also create a believable world where, just as technological advancements have blurred the lines between man and machine, the lines between cultures and races have also become blurred, if not removed altogether. 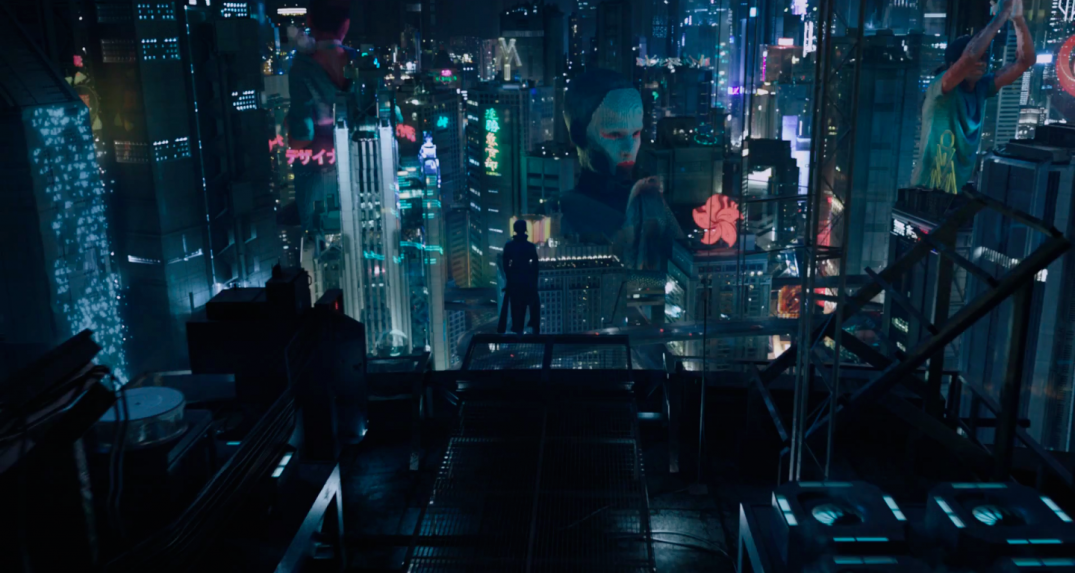 This is probably the film’s own explanation for the whitewashing—that in a world where globalization is at its peak, races have become so mashed together that even language barriers no longer exist (as displayed by Chief Daisuke Aramaki speaking in Japanese throughout the whole film and everyone else understanding him like it’s no big deal). It’s also quite obvious that the creators of the movie are trying too hard to compensate for the lead role’s whitewashing by casting a racially diverse Section 9, but hey, I’m good as long as they do the characters justice.

And they do.  Takeshi “Beat” Kitano plays the badass Chief of Section 9 and proves that just because he likes to hang back and bark orders in the comfort of his office doesn’t mean he can’t handle himself like a pro out on the battlefield, single-handedly taking on multiple heavily armed opponents without even breaking a sweat.

Pilou Asbæk’s Batou fits his role like a glove as the hulking partner-in-crime with a heart, with his closeness to the Major and the hair and the kickass cyber-enhanced eyes.

Chin Han’s performance as Togusa is top-notch as well, but for a guy who’s supposedly the most human of all the members of Section 9, he’s got less of a personality than Batou. Then again, we can probably blame that on the fact that Togusa’s got less screen time, because we can’t really expect the film to cram all members into a single two-hour spectacle without it looking like a Zack Snyder Justice League screw-up (sorry, inner DC fangirl in me). Because apart from Section 9, there needs to be room for the villains, too.

This, I believe, is where the film loses its footing. Ghost in the Shell has borrowed the character of Hideo Kuze from the 2nd GIG’s Individual Eleven storyline, and while Michael Pitt does an incredible job at portraying a failed and sorta-corrupted man-machine hybrid, I felt like more of his dynamic with the Major could have been explored. Instead, the movie sets him aside in the second act in favor of a bigger baddie in the form of Peter Ferdinando’s Mr. Cutter, whose motivations are as all-over-the-place as his character background.

Not only is he the stereotypical corporate suit who’s after nothing but money (because big business dudes are always bad guys, right?), his character also lacks any real appeal, making his defeat in the final act extremely underwhelming and not at all satisfying. Because of this, the plot becomes bland, flat, generic, and predictable—not really something you’d expect from a film that supposedly explores the complicated morality of artificial intelligence, identity, individuality, and consent.

Still, there’s no denying that Ghost in the Shell is a thrilling visual treat, and admittedly, I was too distracted by all the pretty shiny things to remember that I’m supposed to be abhorred by the lead casting. The fact that the Major is named Mira Killian in the film also made me want to rage-quit and flip all the comfy seats at the cinema, but as the movie went on, it revealed that the original Motoko Kusanagi was experimented on and transferred into a new shell in the form of Scarjo’s character.

While making the whitewashing itself a plot point might seem like adding insult to injury, it does work as a justification for the poor casting choice. After all, the original anime director Oshii himself said that “The Major is a cyborg and her physical form is an entirely assumed one. The name Motoko Kusanagi and her current body are not her original name and body, so there is no basis for saying that an Asian actress must portray her. Even if her original body, presuming such a thing existed, were a Japanese one, that would still apply.” Is it really that simple? It also doesn’t help that the movie has an underlying theme of saying that it’s not the outer (white) shell that matters but what’s on the inside. Sneaky bastards.

As an Asian minority myself, I probably should be more outraged at the whitewashing, but it honestly doesn’t bother me that much. But then again, that’s just me—the fight scene in the water with the camouflage-tech and the iconic sorta-Tachikoma fight in the temple both gave me so many goosebumps that I forgot about all the racial discrimination. Saito’s kickass sniper skills at the end were a delightful icing on the cake, too. So really, the film was a pleasant surprise for me.

What did YOU think of Ghost in the Shell? Are you part of the angry mob waving pitchforks around, or are you just happy to see the Major in all her nipple-less glory? Let us know what you think! 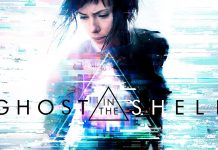