So, we have Star Wars characters rendered in innocent 8-bit which effectively mitigates the graphic nature of their exceptionally inglorious ends. Got it.

Now, let’s do the play by play:

1. Darth Maul Vs. Qui-Gon Jinn from Star Wars Episode I: The Phantom Menace

He would have fared better had Darth Maul kidnapped his daughter!!

2. The Death of Anakin’s Mother from Star Wars Episode II: Attack of the Clones

Kill every single Tusken Raider you see, Anakin. Yes, even the children!

I’m sorry, but Samuel Jackson WITHOUT the Force is an unconquerable adversary. Jedi Samuel Jackson? Son, put the lightsaber in your mouth and hit the ‘ON’ switch. There’s no dishonor in doing yourself in before he Force-pokes you somewhere in the basal ganglia.

4. Anakin Vs. Count Dooku from Star Wars Episode III: Revenge of the Sith.

Was it Hayden Christensen’s acting that finally wore Dooku down? Possibly.
If Christensen was assaulting me with an unforgivably terrible performance, I might also become surprisingly amenable to a double-lightsaber decapitation. Just make it stop!

With the promise of becoming more powerful than one could ever imagine, I too would willingly accept the killing blow.

7. Boba Fett Vs. The Sarlacc Pit in Star Wars Episode VI: Return of the Jedi.

This is my personal favorite. The hollow, distorted little scream? The hungry, undulating tentacles ready to get their…uh, tentacles…on the merciless Mandalorian’s super-cool jet-pack? What, is it the Sarlacc Pit’s birthday?? Could be. Thankfully, he’ll only ever need one piece of cake.
Get it? Let me know if you don’t get it.

Father fights son; father helps son. Sure, the Force is involved and there’s an electrified geriatric successfully pushing ALL your buttons, but….this is kind of what my adolescence looked like. Well, pop-pop wasn’t nearly as formidable, but the similarities are uncanny.

9. The Death of Darth Vader from Star Wars Episode VI: Return of the Jedi.

The chirping beeps representing dialog? Brilliant. What’s Anakin beeping? Something about wanting to see Luke with his own eyes. Touching. As a son deprived of a father who, incidentally, spent time killing his friends AND their home planets, I would advise Luke to…decline.

Yeah, it happened and it really sucked. Sure, it looks more like Excitebike than an actual, detrimental Star Wars scene, but…it still kind of stings. Damn you, Kylo.
However, you can hear Chewie gargling off-camera when Han tumbles into the abyss.

Any other Star Wars scenes worth rendering in simple and satisfying 8-bit animation? Hmmm. I’m going to need your help with this. 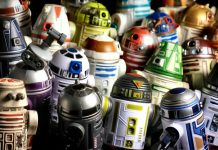 This Is the Top 10 Droid List You’re Looking For