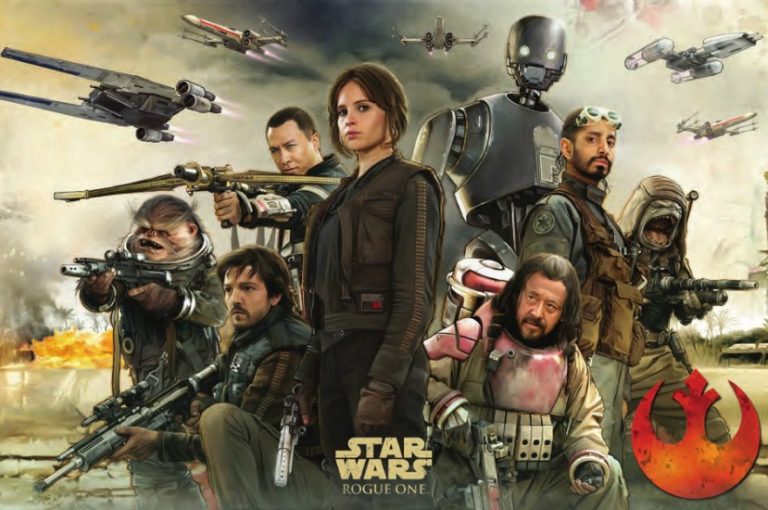 Cathy granted us Friday’s spoiler-free review, and now Marc grants us the following, spoiler-filled Rogue One review. So, yeah, it’s rich with spoilers. Continue only if you’re not affected, disgusted, or driven to setting couches on fire by the sharing of major plot-points that may ruin your future movie-going experience.

In a way, Rogue One: A Star Wars Story is a major gamble for Disney and Lucasfilm. The Force Awakens was huge and proved that Disney has what it takes to craft a Star Wars film that will continue the saga into the next generation and beyond. But with Rogue One, the following question is raised: is fandom ready for more Star Wars that stands outside of the film timeline that has been so carefully crafted in the hearts and minds of fans? After viewing Rogue One, this lifelong Star Wars fanatic says yes — yes there is.

Because Rogue One is a storytelling triumph. I was ready to like this movie. I dug director Gareth Edwards’ take on Godzilla and I was confident that he had the chops to take on Star Wars. But I wasn’t really ready for just how nostalgic Rogue One was or how tethered to the mythology of the original Star Wars it would be. Make no mistake, Rogue One is not an exercise in nostalgia. There are many moments that will give an old-school SW fanatic the warm and fuzzies, but this film exists on the merits of its daring and gritty storyline. Rogue One subsists in the sci-fi stratosphere of Firefly and Battlestar Galactica as it’s always emotionally fraught, sometimes dirty, and always focusing on the humanity of the tale over the spectacle.

Rogue One and Gareth Edwards have some heavy lifting to do from jump street because they have about seven or eight characters that have to be established during act one. This is where the film exceeds so admirably, because it is never really heavy-handed when it comes to exposition. Things are explained on the move so fans will care very deeply for the heroes by the time the super-charged third act hits, but no one will be bored because there is always some kind of story momentum, be it emotion or action.

The emotional center of the film is Jyn Erso (Felicity Jones). The film opens with something new to the Star Wars saga — a flashback — as we witness the tragic beginnings of Jyn. We see the murder of her mother, and the abduction of her father Galen Erso (Mads Mikkelsen) at the hands of an Imperial functionary named Orson Krennic (Ben Mendelsohn). 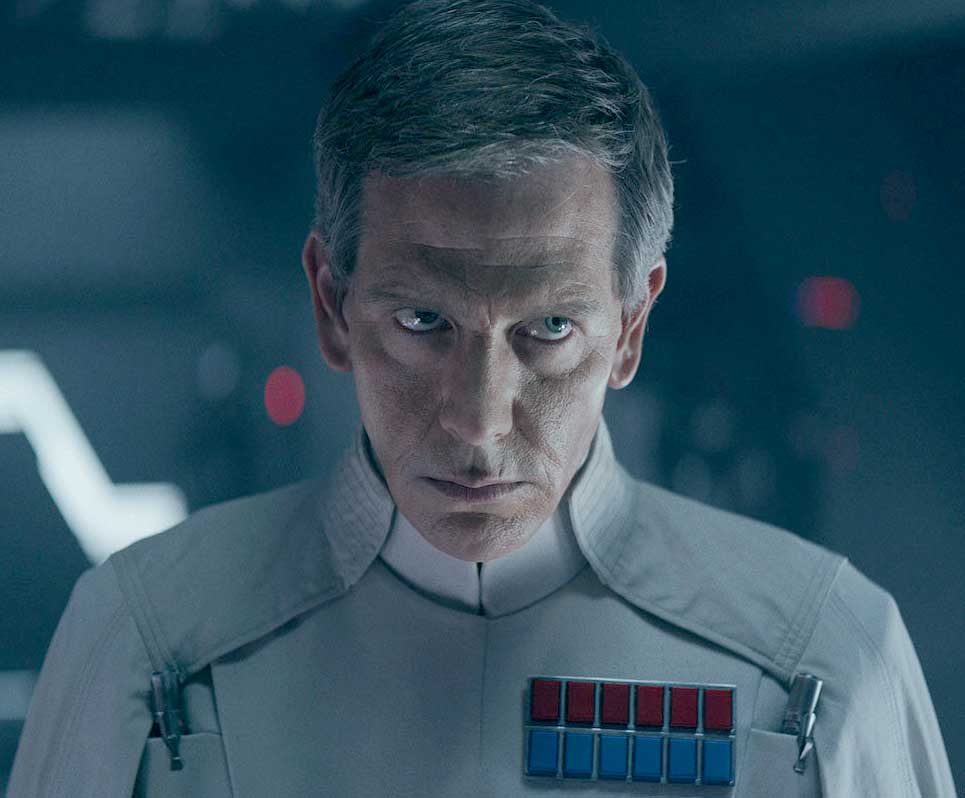 Krennic is so easy to hate because he is the ultimate bureaucrat. He wanders around in a jaunty white cape and exerts his authority on unarmed woman and children. Of course, when he confronts an Imperial higher up, Krennic damn near pees himself — and believe me, he encounters some of the most iconic Imperials that you can imagine. More on that in a bit.

Young Jyn is rescued by Saw Gerrera (Forest Whitaker), a freedom fighter that is more insurgent than Rebel. Jyn grows up in hiding from the Empire as there are some obvious parallels between Jyn and The Force Awakens’ Rey. Yet, the story soon swallows up any of that as we are just off on a Star Wars adventure that utilizes the visual language of Ralph McQuarrie and the original 1977 Star Wars. And really, that’s where this film succeeds the most; it is a two-hour and change love letter to McQuarrie and that original Star Wars aesthetic. When the film takes us to the Rebel base on Yavin, Rogue One starts to feel like a cut scene from the original Star Wars. Since all the McQuarrie designs are used, from the original helmeted Rebel troopers, to familiar droids, to Imperial officers and tech, Rogue One’s designs will fill even a casual fan with the warm blue milk of nostalgia.

But the story is very new as Rogue One introduces flawed hero after flawed hero:

Each of these characters bring up the idea that rebelling against the establishment, even when the establishment is as abhorrent as the Empire, requires a great degree of moral compromise. In fact, most of the conflict of the second act comes within the Rebellion as there is a great deal of discussion between the heroes of Rogue One and the established Rebel Alliance over how far the fight against the Empire should go before the Rebellion becomes the tyrants.

Heck, man, even the comic relief droid, a reprogrammed Imperial sentry called K-2SO (Alan Tudyk), must undergo an internal struggle between his new heroic and base Imperial programming. When there’s a dichotomy to a droid character, you know you have a Star Wars film that’s not afraid to delve deep. There are more shades of grey in Rogue One than in all the previous Star Wars films combined, and this leads to a whole new Star Wars experience.

The Story takes fans to a number of different planets as the specter of the Death Star deepens. You see, Galen Erso is the architect of the Death Star, a reluctant engineer that must do the Empire’s bidding. The Rebellion must decide what to do about Galen and this new super-weapon.

We also get to see some Game of Thrones-like machinations between the Empire higher-ups as Krennic must navigate the Imperial command structure to achieve his own dreams of power. Along the way, Krennic meets and is thoroughly abused and defeated by both Grand Moff Tarkin and Darth Vader. Somehow (and I know Lucasfilm used an animated stand-in, but still), Moff Tarkin is played by an animated Peter Cushing. It isn’t creepy or unsettling;it’s magnificent that the legacy of Cushing can be so deftly achieved and remembered. Tarkin strips Krennic of the Death Star as Rogue One provides a rare look into the Imperial politics that binds the Empire.

As for the characters of Galen and Jyn — have we ever experienced a real father-daughter relationship in Star Wars? While Galen is technically responsible for the Death Star, he is a complex man trying to do right by his family. Galen is an Oppenheimer-like figure that stands on the razor’s edge of morality, and through him and his brave daughter, fans will witness an SW dynamic like they’ve never seen before. Plus, thanks to Galen, you will never look at the attack on the first Death Star the same way again. Ever.

Which brings us to Vader. It would have been very easy for Rogue One to abuse Vader’s presence. This could have been a Darth Vader story and Disney would have been guaranteed a zillion dollars just on the back of the marketing power of Vader. But Rogue One uses Vader sparingly, so every second the Dark Lord of the Sith is on screen is potent and terrifying. Of course, James Earl Jones is back as the voice of Darth Vader, and right there your fifteen bucks will be well spent.

The first two acts of Rogue One introduce the heroes and the conflicts, the moral ambiguity and the choices each character must endure. But the third act is pure Star Wars bliss. With X-Wing, Y-Wings, AT-ATs, Star Destroyers, Stormtroopers, Mon Calamari, the Death Star in action, and more ‘pew pew pew’ than you can shake a bowcaster at, Gareth Edwards empties all the Kenner toys on screen and just lets them go to town. This act is even more nostalgic than The Force Awakens with each ship and background character pulled from a classic Star Wars on-screen moment. This act proves there is room for so much more Star Wars, because when a talented filmmaker combines the visual stimulation of our youth with an all new story worth telling, magic can be made.

The ending of Rogue One harkens back to The Empire Strikes Back, as the Rebellion is completely overwhelmed, yet there is still a spark of hope and heroism. I’ve spoiled a lot, but I won’t spoil the last five minutes, because you are just not ready for what you are going to witness. Vader, you guys — Vader. And something else; something that will make any Star Wars fan swell with joy.

But these moments don’t mean anything if Jyn, Cassian, Inwe, Baze, and Krennic aren’t carefully crafted. The space battles won’t mean a thing outside of being eye candy if fans don’t care about the individuals involved. And believe me, you will care. Because this film isn’t about nostalgia, or familiar tech, or Easter eggs; it’s about the human adventure of Star Wars and the price of standing up for one’s beliefs.

Rogue One: A Star Wars Story just set the standard for what these non-saga Star Wars films need to be in order to justify their own existence. Rogue One ensures that the past, present, and future of the Star Wars franchise has endless potential, because there are thousands of stories with thousands of tones to explore. Rogue One has taken the galaxy far, far away to the next level.