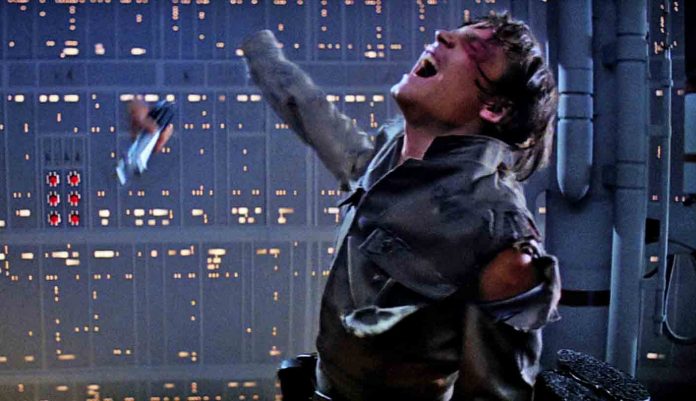 The opening sequence in Star Wars: The Force Awakens is already embedded into the brains of many Star Wars fans. Kylo Ren and the rest of the First Order descending on Jakku, trying to secure the last piece of a map to find Luke Skywalker. When they don’t get what they want, they destroy the settlement of Lor San Tekka and kick-start the film. It was a great opening montage that introduced us to a handful of new characters; Kylo, Poe Dameron, and BB-8 all made their big screen debuts in Episode VII‘s first scene. But it wasn’t always that way. In fact, J.J. Abrams had a different opening scene in mind at one point. Thankfully, our good friend Mark Hamill revealed the original Force Awakens opening.

In a conversation with The Sun, Luke Skywalker himself, Mark Hamill, talked about the original plans for The Force Awakens.

“I can tell you now that in the original opening shot of seven, the first thing that came into frame was a hand with a lightsaber, a severed hand that enters the atmosphere, and then the hand and bone burns away and goes sticking into the surface of Jakku.”

A nice callback to The Empire Strikes Back. But Hamill delivered an even tastier twist.

“And this alien hand comes in, don’t know if it was Maz but it was an alien hand who takes the lightsaber away, and then the movie proceeds as you see it.”

Upon first viewing, this scene would seem out of place. Sure it would be fun to once again see Skywalker’s severed hand from his infamous battle against his father on Bespin. However, showing that scene and going right into the Jakku slaughter would seem incoherent. Sure, we could have put the pieces together later when Luke’s lightsaber turns up on Takodana, but why confuse the audience from the get go?

Now, this scene could always be recycled once Episode VIII arrives. When we last saw the lightsaber, Rey and Luke we’re locked in an epic stare down as Rey offered the Jedi weapon to him. Perhaps the first few minutes of Episode VIII could show the journey Luke’s lightsaber went on prior to the Rey/Luke exchange.

Should the alien hand actually be Maz Katana’s, it would answer one of the biggest questions regarding The Force Awakens. It makes a sudden appearance inside her basement, without any clues as to where it came from. Hopefully in the future, either Rian Johnson or Colin Trevorrow can shed some light on the mysteries of the traveling lightsaber. We also need to know…THIS: why did it call out to Rey in the first place?

I mean, we know Lupita Nyong’o is on board for Episode VIII. Maz will be back, where we can learn if she is, in fact, a Force-user. She seems to know something and as this generation’s Yoda, she needs to share that wisdom with our Jedi-in-training, Rey.

So many questions, and sadly we still have a year-and-a-half before we get any answers. Star Wars Episode VIII (subtitle hopefully coming soon) is set to be released on December 15th, 2017.