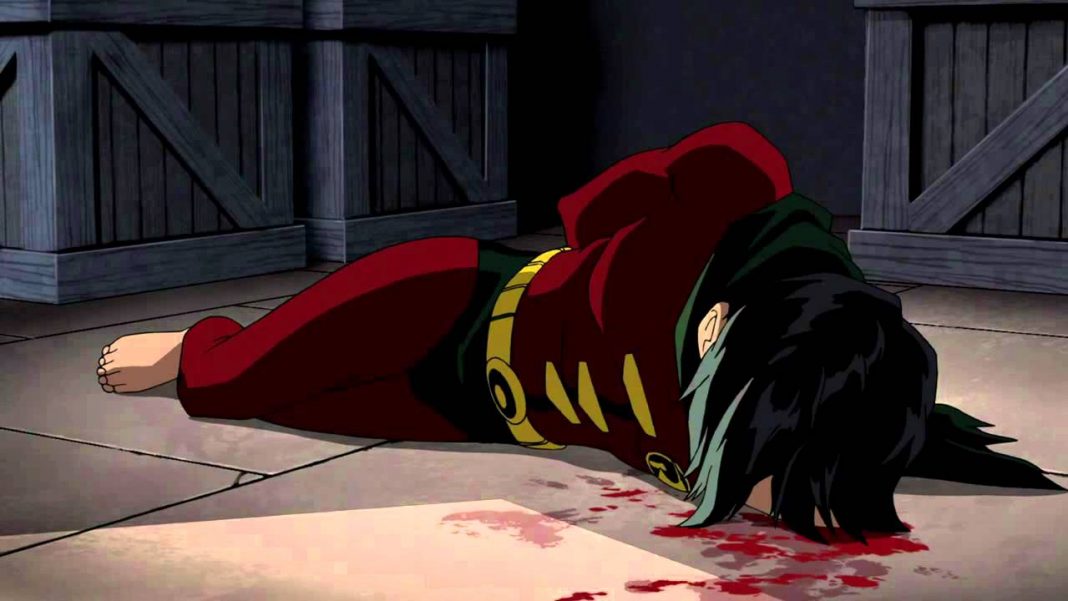 Before Batman V Superman hit theaters, during its (somewhat lackluster) performance in theaters, and after its contentiously received theatrical tour, fans (and future non-fans) were collectively postulating the following question: is the Joker Jason Todd??

They asked this for a few reasons:

2. There’s a Robin uniform stationed inside the Bat-cave. It was posited that the Robin uniform was sent back to Batman – a prop for effective taunting – after the REAL Joker, the one closer in age to Affleck’s Batman, tortured the young upstart for several days before Batman eventually found his shattered, broken ward.

When Batman found Jason, his rage supplanted, well, everything, and he brutally killed the “elder” Joker. Unfortunately, the torture was too damaging, and the once moderately volatile Robin slipped into an irreversible psychosis. And yes, this psychosis manifested itself as a Joker personality, cloning in form, manner and thought the haunting figure responsible for fracturing his mind, and dissolving his innocence.

In my opinion, this was an AMAZING theory, and I’m really hoping the DCCU Joker is a psychologically mangled Joker-survivor taunting his “guardian” as the perfect representation of his biggest failure. Well, I WAS hopeful.

Our good friends at WSVN-TV had a chance to speak with Suicide Squad director David Ayer, and they asked him, point blank, if this incredible theory held any validity. His response?

Here’s the whole damn video below where WSVN-TV interviewed a bunch of the actors from Suicide Squad. Great. Wonderful.

Suicide Squad comes out on August 5th, 2016 and stars Will Smith as the unerring
Deadshot, Jared Leto as the Drug Czar version of the Joker, Margot Robbie as the deceptive Harley Quinn, Joel Kinnaman as the Suicide Squad’s chaperone, Viola Davis as the shady government agent Amanda Waller, Jai Courtney as the uncouth Captain Boomerang, Jay Hernandez as the inferno causing Diablo, Adewale Akinnuoye-Agbaje as the man-eating Killer Croc, Ike Barinholtz as somebody(unspecified), Scott Eastwood also as a somebody(probably Nightwing), Ben Affleck as the newest iteration of the Dark Knight, Adam Beach as ‘Snakes and Sparklers’ Slipknot, and Cara Delevingne as the possessed spelunker turned witch Enchantress.