It’s almost here! After more than a year of hype, several trailers and a boatload of debate over whether or not Jared Leto will do The Joker justice, Suicide Squad drops in theaters in less
an a week. The latest trailer, released at Comic-Con 2016, provides more tantalizing nuggets about this super-villain team-up flick, and we’re going to point out a few of our initial observations in our Suicide Squad final trailer breakdown.

Before proceeding with our analysis, check out the trailer above.
It’s cool. We’ll wait.

Well, we got a pretty strong indicator of the other “big bad” in this movie… Goliath. If this behemoth is going to be on the same side as Enchantress, who’s been all but confirmed as an antagonist in previous coverage and is shown playing divide-and-conquer with a subway train in this latest trailer, then the Squad has a pretty tall order on its hands. That would also explain the comment by Deadshot (Will Smith) during the trailer about this being a battle of “bad vs. evil.”

We get yet another look at the members of the Squad spending some not-so-quality time in Belle Reve, the prison and sanitarium that is the de facto headquarters of the team in the comic books. Various members of the team are seen in their respective cells, and then being wheeled into an operating room and injected with something likely to ensure their loyalty. None of the Squad look too happy about this except Harley, who is strapped down completely but grinning with glee the entire time.

The final trailer for this movie also gives a hint of what to expect when putting all these combustible personalities in the same team. Deadshot and Rick Flagg (Joel Kinnaman) take clear leadership roles. Harley (Margot Robbie) is the madcap troublemaker. Killer Croc (Adewale Akinnuoye-Agbaje) and Katana (Karen Fukuhara) mostly glower silently when they’re not shown in the montage of action-packed snippets that takes up the final third of the trailer.

Captain Boomerang (Jai Courtney) looks to be a potential scene stealer, as he shows he’s less than impressed with El Diablo (Jay Hernandez) and his ability to summon and control fire.

With a cameo by Batman also confirmed, this is one movie that comic diehards cannot afford to miss.

Who will live and who will die as the Suicide Squad goes to the big screen? Check out our survival odds on every member of the announced cast. 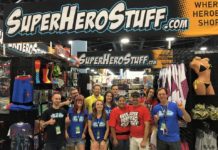 Marvel Takes Over NYCC This Weekend!