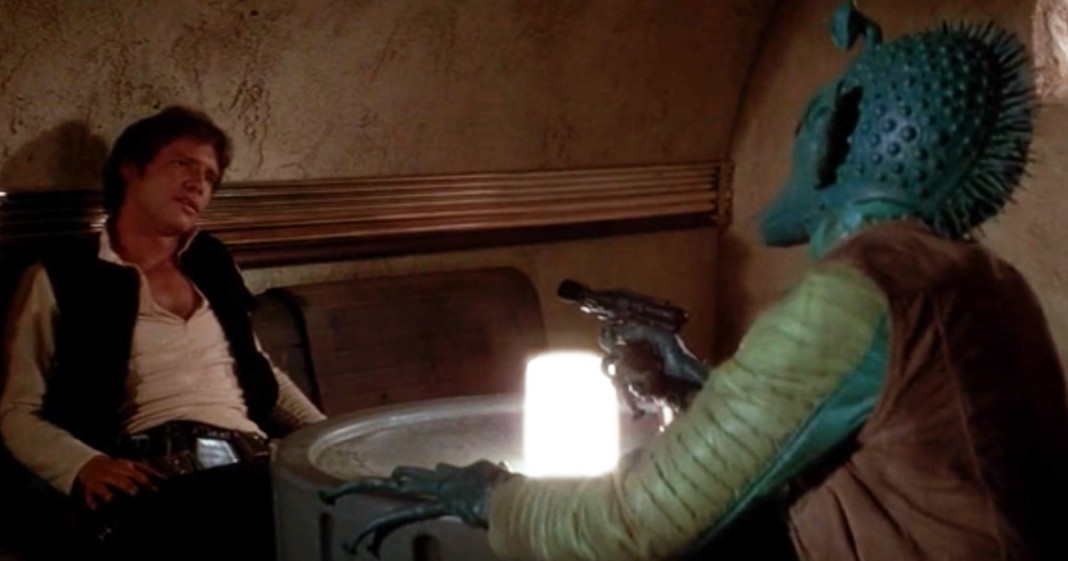 Sides have been taken. People are taking a stand for what they believe in. No, I’m not talking about choosing between Batman and Superman. Or even Captain American and Iron Man for that matter. I’m talking about the decades-old argument about who shot first… Han Solo or Greedo.

It’s an argument going back as long as anyone can remember (well just 1997 to be exact).

The movie: Star Wars: A New Hope. The Scene: the Cantina. The parties involved: the swashbuckling space privateer Han Solo.

And in the other corner: the Hutt employed, Rodian bounty hunter Greedo. Arguments ensued and shots (really just one shot) were fired, leaving Greedo dead. But who was the first to open fire?

Thankfully, it was Solo’s partner in crime Chewbacca (Peter Mayhew) that gave definitive proof on who fired the initial shot on that fateful day.

We told you before about Peter Mayhew tweeting out pages of his original copy of Star Wars. Well today, he finally reached the Cantina scene. From George Lucas himself, we get the original encounter that ended up with a dead Greedo.

ALIEN
It’s too late I think. Jabba would rather have your ship.

HAN
Over my dead body.

ALIEN
That’s the Idea, Solo. You will come outside with me or must I finish it here?

HAN
I don’t think they’d like another killing in here.

ALIEN
They’d hardly notice… get up. I’ve been looking forward to this for a long time.

HAN
I bet you have…

Suddenly the slimy alien disappears in a blinding flash of light. Han pulls his smoking gun from beneath the table as the other patrons look on in bemused amazement.

HAN
…but it will take a lot more than the like of you to finish me off.

So there you have it. Straight from Chewie, Han shot first.

The whole controversy began in 1997, when Lucasfilm re-released the original trilogy. Many CGI changes were made (including that God-awful musical number in Return of the Jedi… WHAT IS THAT!!!). However, what irked fans the most was the infamous Cantina scene. This time, Greedo got off a shot… before Han responded with deadly accuracy. It’s bad enough they made the change, but even worse when they gave Greedo such bad aim from point blank range. The recent Star Wars Blu Ray and digital releases also changed the scene, making the shootout seem simultaneous while having Solo move slightly out of the way. It’s annoying that Greedo gets to fire the first shot, but the Cantina shootout will never go back to the original script; George Lucas doesn’t want Solo to be seen as a “cold blooded killer”.

As for Solo himself, it’s better not to ask him. In an AMA Interview in 2014, Harrison Ford spoke on who he thought fired first. “I don’t know and I don’t care.”

For those who do care, the argument is now officially over. In the end, Han Solo shot first. It also doesn’t make him a “cold blooded killer.” He got the jump on Greedo, before the bounty hunter brought him outside to finish him off. If anything, Solo is more of a hero for firing first. Because of this actions inside the Cantina, he was able to join Kenobi and Skywalker on their mission and embark on a journey that would see him become a general in the Rebellion.

So thank you, Peter Mayhew, for clearing this up. And make sure you continue to follow Chewbacca’s twitter posts as he continues to unveil the original version of Star Wars.