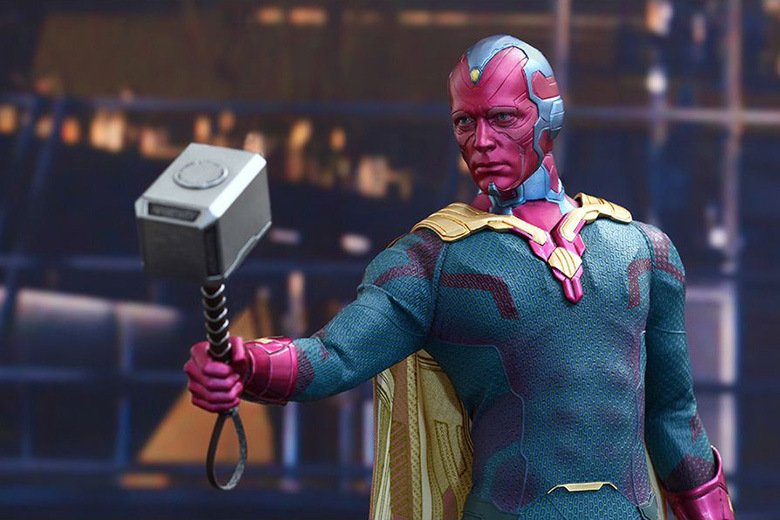 The Vision might have a slightly warped perspective on the world (though not as bad as James Spaderbot) but at least he’s on our side! Well, what happens when he has to pick a side? In a recent interview with Collider while promoting his movie, Shelter, Paul Bettany had his brain picked on a few questions regarding the upcoming brawl between Iron Man and Captain America which I believe is called, Bring It On: Step Up. Wait, no. That isn’t right.

“It’s going to be a lot of fun. I think it’s really interesting, the way that a huge, epic superhero extravaganza is discussing a really interesting question, which is about people unilaterally going into other people’s countries and their intervention there. It’s actually an interesting thing to talk about in a massive forum like that,” stated Bettany while referring to the script. When asked about how the Vision plays into the team dynamics (since he is currently listed as Team Stark), Bettany answered, “What I love about my character is that there are so many places for him to go. I think he’s very interested in what it means to be human and what love is. The only way one can guarantee one’s loyalty is love. Loyalty is beyond logic, really. Logic doesn’t really provide for loyalty. If your logic changes suddenly and things not make sense, you can alter your allegiance, but love stops you from being able to do that.” I guess that means we’ll be seeing interactions between Vision and the Scarlet Witch, right? Quiet down, comic book fanatics!

We had heard that Joss Whedon was having some issues with Age of Ultron and people were often wondering how the Russo Brothers, known for The Winter Soldier, would hold up. When queried, Bettany responded, “They both have a really different approach. I loved working with all three of them. The really great thing with a cast that big is that you have two directors. You can always get one of them to have a chat with about what’s coming up next, and that’s great. I’m really excited to see what they do with what we shot.”

Finally, when asked on his opinion on how Marvel is able to continually up the ante and make movies bigger and bigger, Bettany said, “Yeah. I think fans feel that they’re in safe hands, and the reason they feel like they’re in safe hands is because the films are being made by fans and they remember what it is about these stories that connected with them, in the first place. That’s why they have heart.”