Home MOVIES Scrutinizing the Civil War Trailer: Three Questions We Had to Ask! 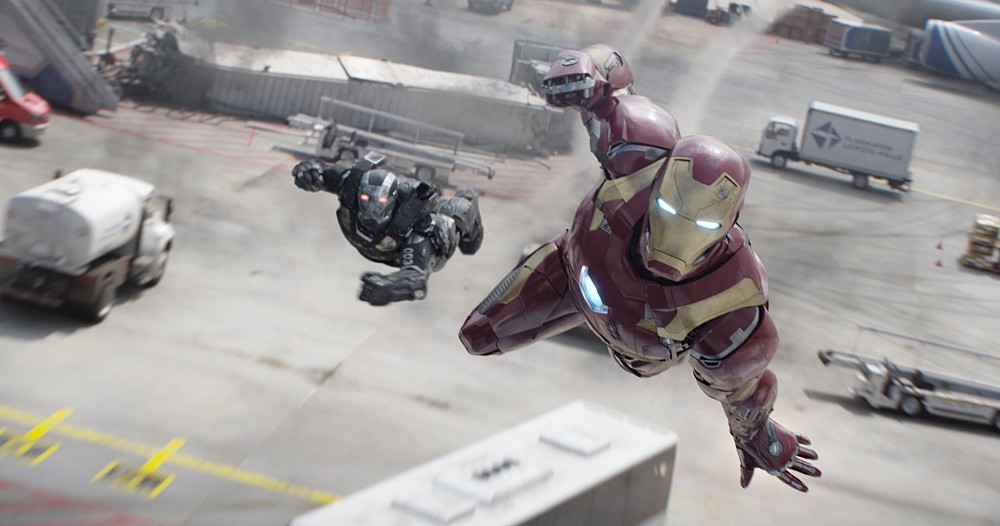 I can still see it all every time I close my eyes: Spider-Man holding Cap’s shield; Bucky going toe-to-toe with Stark, and a whole half-second of Crossbones! The second official trailer for Captain America: Civil War damn near broke the internet last week, but the dust has settled on the initial excitement. Now, we’re finally able to take a step back, exhale, and start scrutinizing the Civil War trailer with these three questions we absolutely had to ask!!

Now before I jump into rumor/speculation territory, let me first say that I loved the trailer. It was perfect. It showed enough, without showing too much (unlike the trailer for Batman V. Superman earlier this year). Everything featuring Black Panther was perfect. From the chase scene to his rooftop showdown with the Winter Soldier. Something else to love… how about this shot:

AAAH!!! Ant-Man hitching a ride on Hawkeye’s arrow. Just shut up and take my money already.

Now, I know the trailer was amazing. While it did deliver everything I hoped it would and more, there are some questions that need answers. So let’s get to those 3 questions!

1. Where Are All The Bad Guys?

Oh look… a quick glimpse of Crossbones. That was the best shot we got of any main villain in any Civil War trailer so far. Sure, I know the movie is supposed to feature Iron Man vs Captain America. We’ve also seen Thaddeus “Thunderbolt” Ross as an antagonist, so that should be enough. But it’s not enough. I need more. I need… HYDRA.

You just can’t have a Captain America movie without them. HYDRA and Captain America go together like butter and warm toast. If former HYDRA agent Brock “Crossbones” Rumlow isn’t affiliated with HYDRA anymore, then why even bring him back?

There’s also the Daniel Brühl factor. It’s been noted that the German actor is going to play Baron Zemo, but we’ve gotten nothing to confirm that. So what if he’s not playing Zemo. What if instead… Daniel Brühl is playing The Red Skull??

Do not treat that comment as a spoiler… or anything other than just a casual daydream. However, it could be plausible. Hugo Weaving does not want to play Red Skull again; he previously said his work with Marvel wasn’t a great collaboration. So why not let German born Brühl take over? He could easily bring Johann Shmidt back to life, perhaps even returning as a disciple of Thanos (remember he was sucked to the opposite end of the universe in Captain America: The First Avenger). It would make sense that Marvel would create a press release saying Brühl is playing Baron Zemo, only to throw the scent off the Red Skull trail. I’m not saying it’s going to happen, but until we see more than a set photo of Baron Zemo, you can’t rule out a Red Skull return.

No question. Spider-Man stole the show in the Civil War trailer. Ol’ ‘Underoos’ swinging in for the final scene was the gift people have been waiting for, and Marvel truly delivered him, complete with the following, lovable characteristics:

If Stark Industries is behind the design of Spider-Man new uniform, then could we bear witness to the birth of the Iron Spider-armor? Stay with me here. Tony Stark and Peter Parker are going to build some sort of partnership in Civil War. Stark builds him a suit to enhance Parker’s abilities prior to the first Avenger’s showdown. During that battle, James “War Machine” Rhodes goes down and is out of commission (hopefully nothing too serious… we’ll get to that soon). Realizing the danger he put the teenage Parker in, Stark upgrades Spider-Man’s costume to give us this beautiful incarnation.

Is that enough to convince you that we might see a side of Spider-Man we’ve never seen before? The pieces are all there for us to get the Iron Spider-armor. Will it manifest? Who knows. Perhaps we’ll see it in a future Spider-Man installment.

It’s a fact; someone is going to die in this movie. Will it be someone we’ve grown to love over the course of several movies (will Cap follow in his comic footsteps?)? Could we get Quicksilver 2.0 and have someone new get offed? Will it be Tony Stark because Marvel can no longer afford Robert Downey Jr.?? Every option is on the table. Well… except for one:

Don’t count on War Machine dying. The folks over at the MCU are doing everything possible to convince you that James Rhodes is going down. Sure, he gets lit-up and comes crashing down to Earth, and sure, he’s not moving when Iron Man comes to his rescue. But this is all an illusion, similar to the foreshadowing used in Age of Ultron for Hawkeye (who is still chugging along). However, there is a new theory on who could be kicking the bucket in Civil War, and while it’s based on one picture… it could still be considered a SPOILER.

One eagle-eyed redditor went through the new trailer frame-by-frame and found this gem. Right above Steve Rogers shoulder during his fight with Stark, lies The Winter Soldier… motionless… with his mechanical arm ripped off. Is he dead? Is this the emotional death coming to this installment of the MCU? It can’t be. Bucky Barnes needs to take his rightful place next to Steve Rogers before he eventually hoists up the red, white and blue shield himself. Someone’s not going to survive this Avenger’s War. Is the man behind the chaos also its biggest causality??

What did you think of the new Civil War trailer? Are there any other questions you thought of? If so, let us know below!