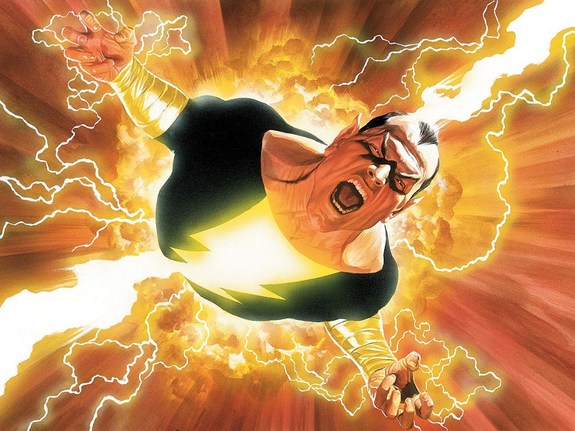 So, Batman v Superman: Dawn of Justice was dark, dour, and whatever other descriptor you want to apply expressing the depressing tone of DC Films’ first official crack at a Cinematic Universe. Suicide Squad came along and tried like hell to mitigate the former’s critical blowback, but suffered from a severe lack of direction made obvious by its incongruent editing. Of course, we’ve heard on multiple occasions that Justice League will turn the tide, and incorporate a lighter tone and sense of wonder sorely missing from DC Films’ arguable output.

To further this tonal shift, and to confirm Warner Brothers’ and DC’s commitment to course-correcting, Dwayne “The Rock” Johnson had some extremely positive things to say after meeting with DC execs regarding the future of the DC Cinematic Universe.

Why was he meeting with DC/WB executives? Because The Rock will be representing Khandaq and belittling moral quibbles as Black Adam, the ying to Shazam’s yang. Now, one might think anyone playing Black Adam — an overly righteous but EXTREMELY powerful sh*t-heel — has no business spouting out anything regarding hope, fun, or positivity considering BA has literally ripped dissenters in twain in front of thousands of onlookers. Basically, when The Rock can state a tonal shift in the midst of his character’s understood volatility, you damn well know this shift is for real.

Had a very cool and strategic meeting with the heads of DC about their entire universe. As a hard core DC fan, to get a real sense of the tonal shifts and developments coming in these future movies has me fired up. Something we, as DC fans have all been waiting for for a very long time. Hope, optimism & FUN. Even when talking about the most ruthless villain/anti-hero of all time finally coming to life. Prepare yourselves DC Universe. #KneelAtHisFeet #OrGetCrushedByHisBoot #BlackAdam⚡️

And Dwayne Johnson wasn’t the only party left with a lingering taste of excitement post-meeting. DC’s Chief Creative Officer, Geoff Johns, also had some positive sentiments to share:

One of my favorite meetings ever… ⚡@TheRock #BlackAdam pic.twitter.com/5gRsfH3mZx

So, what do you think? Is the tonal shift necessary? Is it too much, too soon? Will Black Adam also dabble in quilting? Sound off!