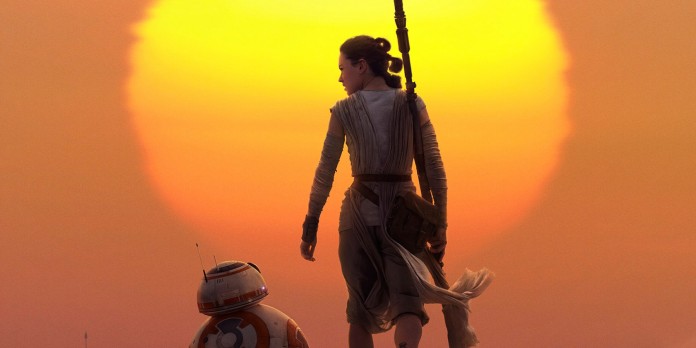 It seems like Star Wars has taken the world by force (*cough*). One of the more recent additions to the Star Wars craze was the publishing of the new IMAX 3D poster. The movie is probably the most anticipated movie of all time considering the first day of presale tickets totaled over $6.5 million shattering the previous record of $1 million. Big presale movies in the $1 million range include The Dark Knight Rises, Avengers and Hunger Games: Catching Fire. Obviously Star Wars: The Force Awakens has some big expectations to satisfy. Will the movie be able to do it?

The poster itself is very ordinary for an IMAX 3D poster. The character choice for the poster is very surprising seeing as it doesn’t feature Han Solo, General Leia or R2-D2. Instead, it features Rey walking into the sunset with BB-8 on Jakku. Although Rey will be a big character in the upcoming film, you would think the IMAX poster would feature a more recognizable character. Then again, the more we read about the upcoming film the more Rey seems integral to the story. Sure, she’s a new, younger character with potential, familial ties to Star Wars stalwarts, but she’s also a guide of sorts, welcoming the next generation of Star Wars fans and introducing them to characters and stories that came before Star Wars: The Force Awakens. Speaking of which…Star Wars: The Force Awakens hits theaters on December 18th. I just…I just can’t…..I JUST CAN’T WAIT ANYMORE! I CAN’T! I NEED TO SEE THIS @#$%ING MOVIE! AAAAAAAH! Ahem. Sorry.