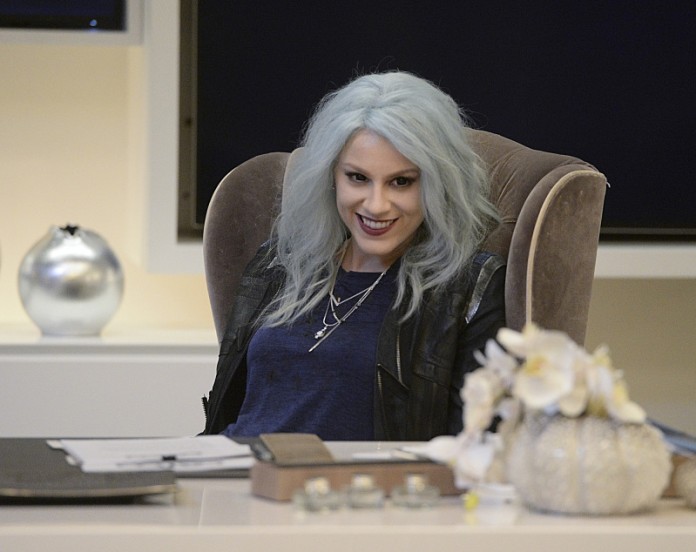 Supergirl Episode 4 is all about family this week as a tried and true member of Superman’s rouges gallery arrived to electrify possibly the best episode of Supergirl yet.

So far, the villains of Supergirl have been a pretty cool and motley collection of ne’er do wells, but they haven’t exactly been A-list. Now, while Livewire wasn’t exactly on the level of, say, Lex Luthor or General Zod when it comes to Superman lore, the villain that was originally created in the great Paul Dini/Bruce Timm Superman: The Animated Series stands in some rarefied air. Firstly, she was created by Timm and Dini, the co-creators of Harley Quinn, so right there you have something noteworthy. Secondly, Livewire was voiced by Laurie Petty in the cartoon and became a pretty big deal once she popped up in the comic as well. So there is a history to Livewire unlike Vartox and Reactron, the Bronze Age footnotes that Supergirl faced on pervious episodes. So Brit Morgan had a bit of a villainous legacy to fulfill when she stepped into the electrified shoes of Livewire and man did she nail it.

The origin of Livewire as seen on the latest episode of Supergirl was almost exactly like the origin of the character from the cartoon and the comic. Leslie Willis was an angry and mean-spirited shock jock who lived to insult and belittle others. She was a bully who used a microphone as a weapon and she was very good at her job. So good, that Willis became one of Catco’s biggest stars until she began to insult Cat Grant’s pet project, Supergirl. Then, Grant demoted Willis to a traffic reporter as punishment for harming the Supergirl branding. When a storm hit, Supergirl saved Willis’ copter form crashing and a stray bolt of lightning flowed through Supergirl and into Willis and thus, Livewire was born.

Having Livewire receive her powers via Supergirl was a cool twist and it made it seem like Supergirl was co-opting a Superman villain to fill out her rouges gallery; it felt like a new and recurring villain of Kara’s own was created and it was pretty cool. The two characters were the antithesis of each other. While not Joker level, Livewire seemed to only want to spread chaos and ill feelings while Supergirl wanted to spread a sense of safety and joy. Where Supergirl was “Golly, gee” cute, Livewire was internet troll nasty. You really wanted to see Supergirl punch Livewire’s lights out. But there was a sympathetic side to Willis. The fact that she only wanted to please Grant and that the mogul turned her back on Willis for Supergirl made Livewire more than just a freak of the week type experience. And Morgan just nailed it, channeling a bit of Laurie Petty but adding a layer of her own to the classic character. Livewire presented a great challenge to Supergirl but it was Grant that really shined this episode. Before “Livewire,” it seemed like Grant was going to play the J. Jonah Jameson role of foil and obstacle, but this week, Grant showed a heroic side by not flinching away from helping Supergirl take down the new electrical baddie. And Livewire’s powers were pretty intense. Once again the series did not shy away from some big boy, expensive looking SFX with Livewire using electronics as modes of travel and video screens to ironically taunt the media guru. It all looked great, exciting and cinematic, and through it all, the story continued to build the relationship between Kara and Grant, and between Supergirl and Grant. Somehow, the episode juggled character building with a really fun and engaging threat and when Supergirl used a water main to short circuit Willis there was a great sense of catharsis as Supergirl won the day.

Grant was indeed a mother figure to Willis and she seemed to be becoming the same for Kara, but another mother figure popped up this week in the form of Supergirl ‘s adopted mom, Eliza Danvers. First off, as we saw in the pilot, Eliza is played by none other than the original Supergirl herself, Helen Slater. Slater’s character came to visit, sparking up feelings of resentment between Eliza and Alex, Kara’s big sister. Eliza blamed Alex for Kara outing herself as Supergirl and the resentment boiled over into a very awkward Thanksgiving dinner. Poor Winn had to endure the meal in silence, and it seemed like he had a dark parentage of his own as it was revealed that his father is in prison, but as gravy was ladled out, the anger boiled over into conformation and recrimination. Now, the whole thing of “outing” Kara was a bit sledgehammer-y and obvious, but it did go a long way into building a back story for Alex, the woman responsible for protecting Supergirl. Helen Slater brought a refined class to these scenes and saved them for their own clumsy earnestness.

Through it all, we got some back story on Hank Henshaw and a startling secret about Kara’s adopted father (played by former Superman Dean Cain; talk about a Super couple) was revealed. But it was all about mothers and daughters as Eliza and Alex came to the understanding that Grant and Willis could not come to. We also got a new appreciation for Cat Grant as more than just a caricature as we learned that when there is danger, Grant is a woman who stands up for her convictions and protects her friends even in the face of certain death.

The series might want to cut down on some of the more obvious metaphors but as far as heart and action goes, this week’s Supergirl will be hard to beat.