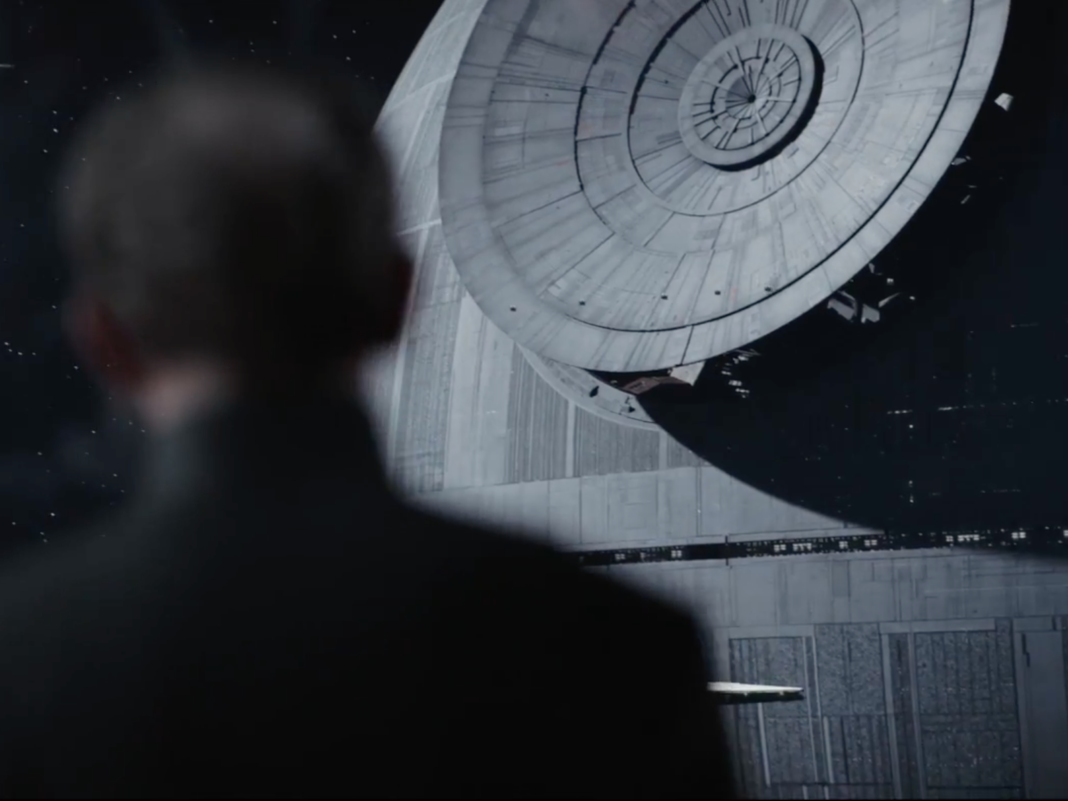 Share on Facebook
Tweet on Twitter
Yep. It’s time for another Rogue One article filled with major spoilers. So, if you still haven’t seen it yet (what’s wrong with you!), you might want stop reading this. Still here? Fine. Continue reading at your own risk.

Rogue One: A Star Wars Story is in the midst of an amazing run. The movie has already passed 500 million dollars at the box office, and could crack nine digits shortly into the new year. The movie has been a hit with critics and audiences alike as fans of a galaxy far, far away continue to flood theaters. However, Rogue One is not without controversy.

While some were upset with the fate of all the main characters in Rogue One, it’s another character that drew heavy criticism for even being included: Grand Moff Tarkin.

The issue arises due to the fact that Peter Cushing died in 1994. Instead of using previously unreleased stock footage (like the movie did with Angus MacInnes (Gold Leader) and Drewe Henley (Red Leader), the minds behind Rogue One decided to use a CGI copy of Cushing to bring Tarkin back into the Star Wars Universe. The New York Times got hold of Kiri Hart, a Lucasfilm story development executive, to understand why Tarkin was even in the movie to begin with.

So there’s your starting point. Tarkin needed to be in Rogue One. The character took over operations of the Death Star before A New Hope even began, and considering how Rogue One ended, it would make zero sense to not have Tarkin in some role. The movie’s tie-in novel, Catalyst, also heavily featured Tarkin, showing Tarkin’s heated rivalry with Orson Krennic (which came to a head on Scarif).

Tarkin was always going to be part of Rogue One. According to John Knoll, the Chief Creative Officer at Industrial Light & Magic and a Visual Effects Supervisor on Rogue One, it was all about figuring out how he would show up on screen.

“We did talk about Tarkin participating in conversations via hologram, or transferring that dialogue to other characters.”

In the end, actor Guy Henry portrayed Tarkin’s body, ussing motion-capture materials on his head. When his performance was finished, digital artists painstakingly took off Henry’s head and replaced it with the CGI-modified Cushing. It was a lot of work for the end product, which is seeing mixed reviews. But don’t expect this to become the new norm in the Star Wars Universe.

“It is extremely labor-intensive and expensive to do. I don’t imagine anybody engaging in this kind of thing in a casual manner,” said Knoll. “We’re not planning on doing this digital re-creation extensively from now on. It just made sense for this particular movie.”

So, while the creative team behind Rogue One has talked freely about how the computer modified Tarkin was created, they haven’t been completely open regarding the ethics of using Peter Cushing’s image. It has been mentioned that Cushing’s family estate gave Gareth Edwards the greenlight to use the late actor’s likeness in the movie. But while getting permission is one thing, actually going through with it is another.

Many media outlets have slammed the movie, saying that the computer Tarkin disrespects Cushing’s legacy. There’s also the fear that as this technology improves, it will set a precedent for future movies to use a deceased actor’s likeness in future roles. This isn’t like Robert Downey Jr. in Civil War, or even Jeff Bridges in Tron: Legacy; it’s taking an actor who can’t say no to being cast in a movie and thrusting them into a role they might have actually turned down.

So, was it amazing to see Grand Moff Tarkin once again in a live-action Star Wars movie? Absolutely. The character has an unwavering legacy in the universe, and seeing his evil regality interacting with new faces made the movie seem special. However, let’s hope that like Rogue One, Star Wars limits its CGI creations. We don’t need Sir Alec Guinness, or any other actors who have passed on, showing up again. So, thank you, Star Wars, but from now on, perhaps just stick to bringing new characters onto the big screen.