Home MOVIES Thor Ragnarok Will Be a Franchise Reboot (Sort of). Plus: New Images... 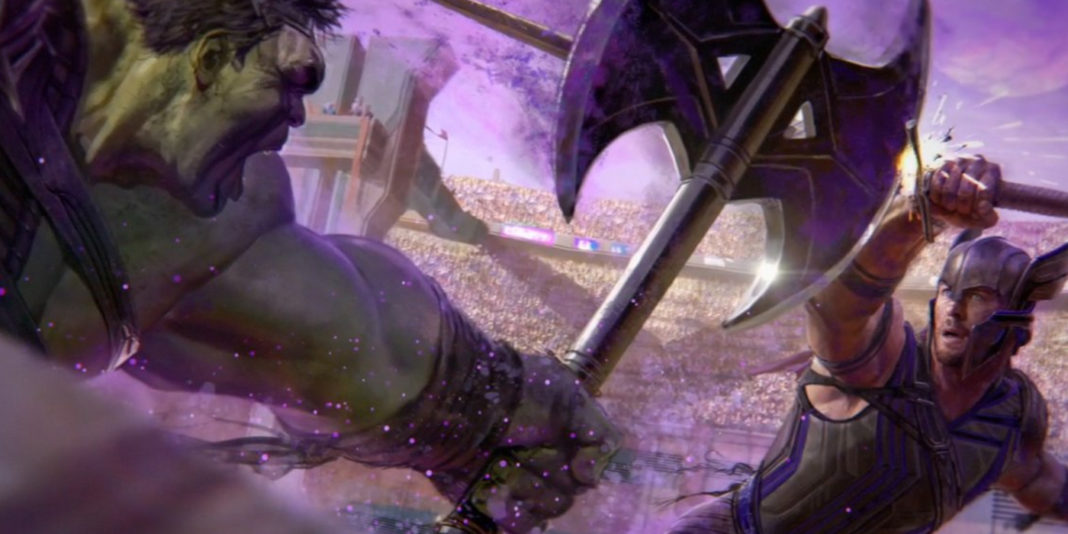 “A lot of what we’re doing with the film is, in a way, kind of dismantling and destroying the old idea and rebuilding it in a new way that’s fresh.”

That’s how director Taika Waititi describes his foray into the Marvel Cinematic Universe as he tackles the third entry into the Thor franchise with the upcoming Ragnarok. When it comes to Thor: Ragnarok, all was quiet on the western front… until yesterday. That’s when Entertainment Weekly gave us our first look into the next adventure for the God of Thunder.

There was Cate Blanchett’s villainous turn as Hela. A glimpse of Jeff Goldblum as the eccentric Grandmaster. Tessa Thompson showed up looking badass as Valkyrie. However, most people’s attentions were turned to the main character of the saga: Thor. In particular… his new look. Sans hair — and without his trusty Mjolnir — we are finally learning the reasoning behind the unkempt makeover for Marvel’s favorite Norse hero.

In a new plot synopsis, we learn things in Asgard aren’t going so well following the events of The Dark World. With Odin ousted, Loki has taken a lackadaisical approach to governing the realm. That leads to Hela escaping her long imprisonment and causing havoc. Of course, Thor does all he can to thwart her… but things obviously don’t go as planned. Thor gets his hammer taken from him, he gets a buzzcut, and gets ‘worm-holed’ to an unknown part of the galaxy, ending up at Sakaar. This colorful world is run by The Grandmaster, who collects combatants from across the universe and has them take part in gladiator contests.

That is as great a starting point as any. It’s how you’d expect a Thor movie to begin: he gets over-powered by an adversary and fights his way back to the climax to the movie. However, it seems Waititi is taking the normal Thor plots and turning them on their heads by introducing a bright and colorful universe and turning the movie into a buddy road trip with a surprise appearance from Hulk.

Besides Thor, we haven’t seen any other Avengers character appear off Earth (Stark in the wormhole doesn’t count). It’s unclear exactly how Bruce Banner gets to Sakaar… but who cares? We’re finally getting a version of the Planet Hulk storyline fans have been clamoring for. Plus, it sounds like Thor isn’t the only classic Marvel character getting a transformation.

“He’s much more of a character than the green rage machine you’ve seen in the Avengers movies,” Mark Ruffalo says of this new Hulk. “He’s got a swagger. He’s like a god.”

A new, confident Hulk. A Thor that’s going to be given the liberty to have more comedic moments. Thor: Ragnarok is slowly turning into the superhero movie with the most potential in 2017. Who would have thought in a year filled with Guardians, Wonder Women, Batmen and Spider-Men… that it would be the Thor and Hulk show giving comic book movie fans all the happy feels they want.

Oh, and to top things off, they’re not the only Avengers showing up in the movie. If Iron Man can assist Spidey this summer, then why can’t Stephen Strange lend a hand to Thor? As seen in the Doctor Strange post-credit scene, Strange and Thor have a nice afternoon beer while Strange offers his help in order to get the Asgardian and his brother Loki off Earth. While it’s great to see Thor back in New York City, Marvel Studios President Kevin Feige says we shouldn’t get used to seeing too much action on the third rock from the sun.

“There’s not a whole lot that takes place on Earth in this film, and that’s one of the things that does.”

So, there’s probably no Captain America or Ant-Man… or even a Nick Fury appearance. Or could there be? In some way, shape or form, Ragnarok will somehow set up the events in next year’s Avengers: Infinity War. Will it involve the final Infinity Stone? Who knows!

Lastly, don’t worry about the pending Infinity War messing with Ragnarok‘s flow. Waititi is confident that while the movie will tie into the larger picture, Ragnarok will stand on its own and offer a new look at the God of Thunder.

“Everyone’s got a slightly new take on their characters, so in that way, it feels like [this is] the first Thor.”

So much awesomeness awaits this November (the third to be exact). New faces with Hela, The Grandmaster and Valkyrie are in the spotlight right now, but more are sure to come when we get a better look at Hulk, Doctor Strange and even Loki. Sure, Guardians of the Galaxy Vol. 2 and Spider-Man: Homecoming are getting all of the anticipation and love now, but don’t be shocked if everyone is talking about how Thor: Ragnarok is the best Marvel movie at the end of the year. If it isn’t, I will cut my hair off and conveniently lose my magical hammer (if I had one).