Home MOVIES Editorials Which Avenger Will Turn Up in Doctor Strange? 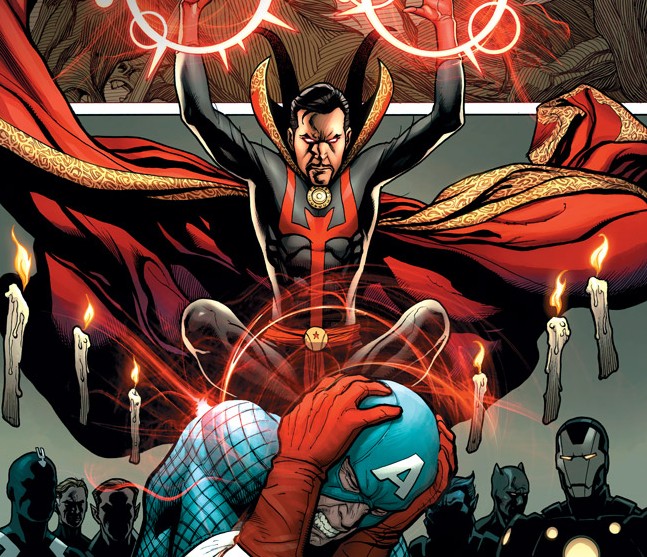 It’s just over two months until the next Marvel superhero graces us with his presence; Doctor Strange will take the MCU in a direction we’ve never seen before. There will be magic and mysticism… and… well, we know what we’re getting. It’s what we don’t know that’s really exciting, like…which Avenger will turn up in Doctor Strange??

There are dozens of characters that could swing by in a variety of capacities. Doctor Strange’s Sanctum Sanctorum is smack-dab in Greenwich Village. New York City is already home to a variety of Avengers (including some guys from Brooklyn and Queens), so really, anyone could stop by.

Well, MCUExchange gathered a duo of tweets that seems to reveal which superhero will be showing up. According to twitter user @s7evendaysageek, The Avengers will introduce themselves to Strange by bringing in the big guns.

It appears as if my little spies have bagged me a scoop! Tony Stark may have a cameo in #DoctorStrange

If the rumor has merit, then it will be Tony Stark showing up to possibly talk Stephen Strange into joining his disassembled group of heroes. Times have been tough on Team Iron Man since the events in Captain America: Civil War. Vision is a hot mess (and possibly heartbroken), War Machine is down (but not out!), Black Widow is M.I.A., Black Panther is back in Wakanda and Spider-Man is still not ready. If Tony Stark is going to get his team back together for Infinity War, he better start recruiting! (Or maybe he’s just establishing The Illuminati… which is certainly fine as well.)

‘But hold the phone,’ you say! Didn’t Doctor Strange wrap production awhile ago? Isn’t the movie complete and just waiting to be released on November 4th? Well, sure, but there’s always the need for some reshoots, and some of the main cast didn’t even finish their shoots until earlier this month. Isn’t that right, Benedict Wong?

Perhaps Tony Stark gets worked into the Doctor Strange story in a way very much like his Spider-Man encounter in Civil War. The most likely scenario would be Robert Downey Jr. showing up in either the mid or post-credits scene, just like he did in The Incredible Hulk. In whatever capacity Iron Man shows up, it’s always great when one MCU character arrives in another’s solo film (I mean… who didn’t love the Falcon cameo in Ant-Man?). There still seems to be something wrong, though.

Not that there’s anything wrong with RDJ. He’s not only one of the hottest movie stars alive, he’s the one responsible for kicking off this whole MCU thing. Plus, there’s always the benefit of seeing two different Sherlock Holmes interact with each other. But if he does cameo, that’s three MCU movies where Stark will show up… in just over a year. I just think there are other, better options to go with a post-credits scene. For example…

Should The Eye of Agamotto hold an Infinity Stone per the many rumors, then Vision and Strange have one major thing in common. Vision is trying to understand the power behind his mind stone, so what if that leads him to Strange? It would show that the Infinity Stones want to be brought together, a strong teaser for the impending Infinity War movie. Plus, Tony Stark has recruited plenty of Avengers into the group; it’s time for someone else to be the one gathering new recruits.

Similar to the cameo his brother, The Collector, made in Thor: The Dark World, a post-credits scene would be a great way to put Jeff Goldblum’s Grandmaster on display. A simple scene where The Grandmaster gets word that yet another Infinity Stone has turned up; he turns and says, “I know someone who would love to know about this information.” A possibly Thanos reference and introduction to a new character? How can you go wrong??

Sticking with characters in Thor: Ragnarok, imagine a scene with Heimdall looking across the Universe and seeing Strange use magic on Midgard. He then goes to Odin (Loki in disguise) to inform him that another Infinity Stone has emerged within the Universe. When Heimdall leaves, Loki reverts back into his normal form and belts out, “Well this is an interesting turn of events!” I mean come on; the world needs more Tom Hiddelston and this will hold people over until Ragnarok is released one year later.

So what are your thoughts on Tony Stark possibly showing up? Do you think we’re getting an Iron Man overload? Or should we enjoy all this extra RDJ before his contract eventually expires? Let us know in the comment section on what you’d like to see in a Doctor Strange post-credits scene.