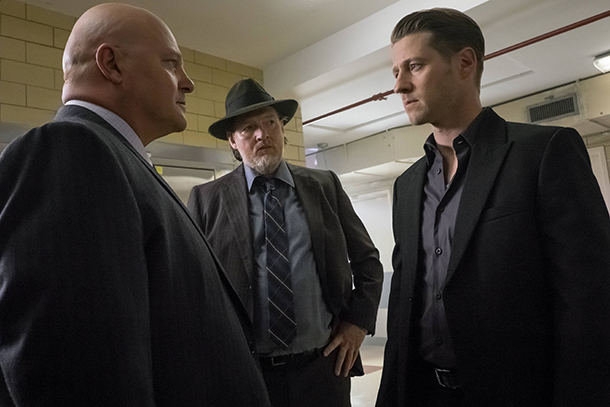 These are the 5 things that kicked us in the gall bladder (and sometimes in a good way) as we watched Gotham Season 3 Episode 8: “Blood Rush.” And, our observations are a little “spoilery,” so…if you’re catching this tonight, I would bookmark this article and join us tomorrow morning. Still with us? Good, we’re always glad to have ya’.

Well, if you’re a fan of Captain Nathaniel Barnes, this is the episode of Gotham for you. The episode focuses on Barnes trying to deal with his super-powered rages as he attempts to bring down a black market dealer of stolen faces. Basically, Barnes rages over the injustice of Gotham City and now has the raw power to do something about it. By episode’s end, Gordon discovers Barnes’ path of destruction and must now work to bring down his own mentor. So prepare yourself for lots of coming episodes where our principal characters have the old justice versus vengeance ideological conflict. But at least we have the wrinkle of one side of the drama having Solomon Grundy-like strength.

So why does Isabel look exactly like the late Miss Kringle? I guess it doesn’t matter because the Isabel character just serves the purpose of being the hypotenuse of a love triangle involving Riddler and Penguin. It would be nice to see Isabel get her own personality and a little bit of agency beyond, “Hey, I look like this dead chick and I’m a librarian.” But hey, it all gives us a story that Batman fans never thought feasible, so let’s see where this roguish romance goes.

Man, Gotham likes the black market body part stuff, huh? In season one we had that dealer in harvested organs that kept Fish Mooney imprisoned, and now we have the dealer in black market visages that Barnes brought down. Someone in Gotham’s writers room really must have liked the Dollmaker story arc that kicked off the New 52 era of Detective Comics.

I have to admit it is good to see James Gordon back with the GCPD. Often times, the heart of Gotham is built around the interactions of Gordon and Harney Bullock, so seeing those two buddy cops back in action was rather nice. While Gordon was away doing the bounty hunter thing, Bullock kind of got lost in the shuffle. Come to think of it, when was the last time Bullock had his own story arc? Has he ever?

The Mad Hatter has been such a potent evil in Gotham that I hope the series finds a way to keep utilizing the hypnotist madman. Even the short scene of Barnes interrogating Jervis Tetch this week is enough to scratch my Hatter itch. Hopefully, the Hatter will be able to make Gotham City his personal tea party again because he’s been one of the more potent villains in the history of the series.