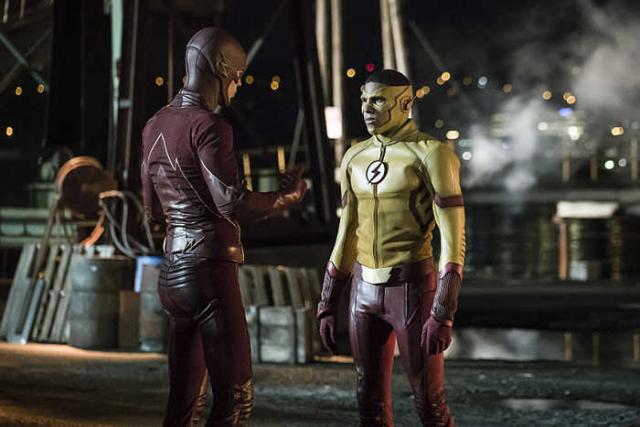 These are the 5 things that kicked us in the rib cage (and sometimes in a good way) as we watched Flash Season 3 Episode 1: “Flashpoint” And, our observations are a little “spoilery,” so…if you’re watching it on Hulu later tonight, I would bookmark this article and join us tomorrow morning. Still with us? Good, we’re always glad to have ya’.

It’s amazing how this season three premiere is able to go so small scale and personal but still evoke the basic idea of the DC Comics “Flashpoint” crossover. Instead of a cosmic, big screen blockbuster crossover with hundreds of heroes, TV’s “Flashpoint” was a small, personal, world-hopping story that was just as effective as the comic book crossover. I do wish that we learned how “Flashpoint” affects some of the Arrow and Legends of Tomorrow characters, but at the same time, I love how this was simply a story about Barry, Wally, Joe, Kaitlin, and Cisco. It just shows that some classic comic tales are so classic that they can be told in multiple ways in multiple forms of media.

2. The Kid Is Alright

How good is it to see Wally West in the classic yellow Kid Flash garb? I kind of wish we first saw it in the mainstream CW Universe, but man, Wally wears the yellow well. The shoulders look a bit odd on the suit, but that did not stop Wally from looking every inch the hero. Hopefully, Barry witnessing Wally in the Kid Flash suit will somehow lead to the arrival of the classic Flash sidekick to the mainstream universe. Even though Wally gets his yellow butt kicked by Rival, seeing Wally in the suit is a delicious foreshadowing of things to come.

It would have been nice to get an origin for Rival, but the villain serves his purpose to get Barry Allen back in the red suit. The Rival suit kicks ass and he seems like a big time threat. Meanwhile, we have the arrival of Doctor Alchemy in the show’s stinger. Alchemy is one of Flash’s most fearsome foes, and this week, we see the ominous arrival of this storied villain to Flash TV.

New villains aside, this week is all about the overwhelming and constant threat of Eobard Thawne, the Reverse Flash. The thought that the killing of a gentle mother would be the inciting event to saving the world is mind-blowing and so personal to our hero. Seeing Thawne in his cage, knowing that he would be needed to clean up Barry’s mistake makes this one of the most intense episode of any CW DC show. After “Flashpoint,” I wouldn’t mind if Reverse Flash becomes The Flash big bad once again in season three.

Poor Cisco gets the short end of the stick, huh? Now that we are (mostly) back to the right reality, Cisco’s days as a billionaire are over. Billionaire, almost Tony Stark Cisco was awesome, but look, now that the “Flashpoint” universe is over, Joe is no longer an alcoholic, Kaitlin is no longer a simple eye doctor, and Wally is no longer dying (hey, where was Harrison Wells?), but poor Cisco is no longer the most powerful man in Central City. Oh well, it may be worth it to have our heart of gold Cisco back even if he needs to find coffee money in his couch cushions.

So yeah, I loved this episode. It was personal and complex, dramatic and emotional. But damn, I was hoping for the arrival of Supergirl to Barry’s Earth after the Flashpoint world ended.