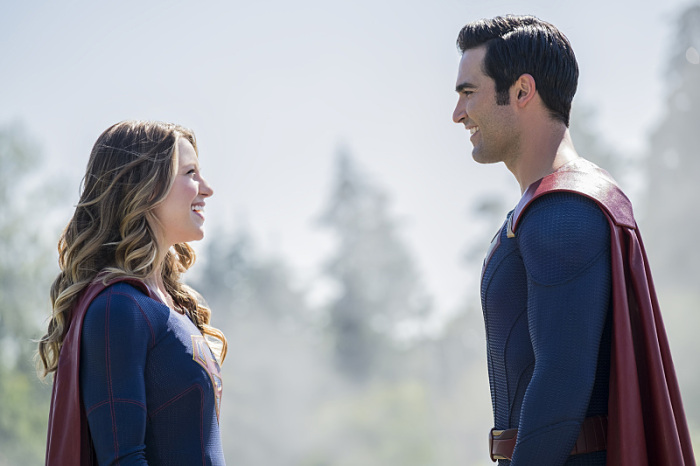 These are the 5 things that kicked us in the rib cage (and sometimes in a good way) as we watched Supergirl Season 2 Episode 1: “The Adventures of Supergirl” And, our observations are a little “spoilery,” so…if you’re watching it later tonight, I would bookmark this article and join us tomorrow morning. Still with us? Good, we’re always glad to have ya’.

Seeing Superman and Supergirl work together to save an endangered plane was pure nostalgic perfection. Remember, the Super cousins never met in the old school Superman films so this is the first time in live-action DC fans have ever seen Kal and Kara work together. It is like seeing a Curt Swan drawing come to life and this team-up reminds me of the pure spirit of the Superman mythos. I mean, there they were, Superman and Supergirl, no angst, no soul searching, just performing a super-feat to save people. That’s just the way it’s supposed to be.

Adding Superman to Supergirl is the biggest change for the series as season two kicks off, but there are changes all around. Kara and James Olsen break up, Winn takes a job with the DEO, Kara begins her career as a reporter, and Cat Grant has a new assistant (Miss Teschmacher, you guys, Miss Teschmacher!). So it looks like there are many new adventures and changes ahead for our extended cast as Superman settles into his role as Kara’s partner. And let’s not forget the arrival of the stranger on the pod, a stranger that comes with a LEGION of possibilities. See what I did there?

3. Bring on the Bad Guys

Tyler Hoechlin has become the latest live-action Superman and I’m loving him already. Listen, I don’t want to rip something down to build something up, but after two films of dark, depressing, reluctant savior Superman in Man of Steel and Batman v Superman: Dawn of Justice, I almost teared up at the sight of a bright, caring, sensitive, positive Superman. Tyler Hoechlin is a perfect combination of ‘aw, shucks’ Kansas farm boy and greatest superhero that ever lived. He wears the cape well and will be fun to watch this season. Zack Snyder take note: Superman– he saves people with a smile. Although it is weird to see Jimmy Olsen tower over Clark Kent.

One character that hasn’t changed is Cat Grant. It’s hilarious to watch the usually in control Cat fawn over Clark, but other than that, Ms. Grant returns to her role as Kara’s surrogate mother. Watching Cat guide Kara’s career was touching and a nice bit of synergy from last season. Plus, I’ll say it again: Miss Teschmacher? Sheer perfection.