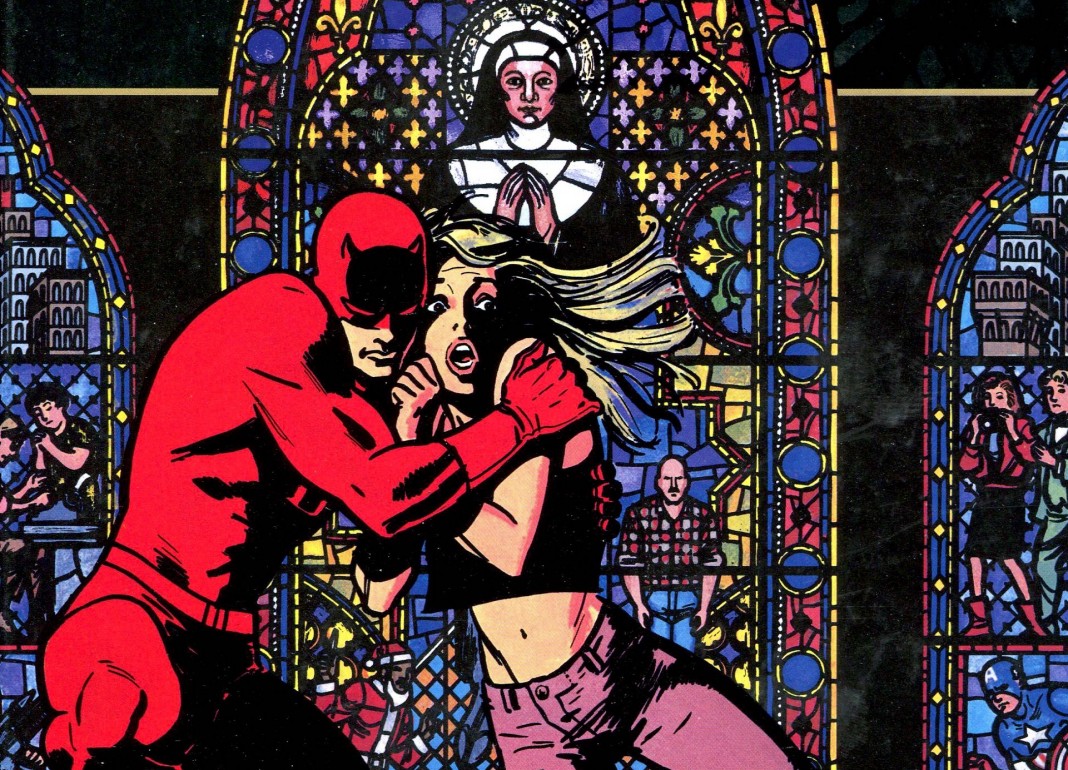 Many talented authors have written Daredevil stories over the years, including some of the most famous names in the comic book industry, like Stan Lee, Kevin Smith, Brian Michael Bendis, and Mark Waid. However, to the writer of this article, one name reigns supreme: Frank Miller. Before his arrival to Daredevil, the series was doing poorly in sales, fueling the discussion of cancelling it. However, after editor Denny O’Neil gave Miller the reigns to not only pencil but write the series, sales began to grow, and the man without fear started being published monthly.

Miller’s initial run on Daredevil lasted from issue #168, the first appearance of Elektra, to #191, one of the darkest issues in Daredevil’s history, in which Daredevil forces a hospitalized Bullseye to play a game of Russian Roulette. Three years later, Frank Miller returned to the series for a seven-issue story arc to redefine and regenerate Daredevil. Today, we take a look at that story arc, known simply and fittingly as Daredevil “Born Again,” and how it could play a role as a future season in Marvel’s Daredevil Netflix series.

First of all, it must be said that no summary can ever do the Daredevil “Born Again” story arc justice. If you can, take the time to read it in Daredevil #227 – #233. You will not regret it.

Slowly but surely, Daredevil’s secret identity is sold upwards until it finally reaches the grandmaster of organized crime, Kingpin, who uses it to his advantage over the next six months, freezing Matt’s accounts, foreclosing on his apartment, and hiring a cop to accuse him of paying a witness to perjure in court.

As Matt’s life falls a part around him, his girlfriend at the time, Glorianna, leaves him too and rebounds with his partner, Foggy Nelson. His only saving grace is Foggy’s fantastic legal defense, saving him from jail but failing to keep his ability to practice law from being barred.

With his initial plan to have Murdock jailed now botched, Kingpin orders his apartment to be firebombed but has the Daredevil costume spared from the blaze. When Matt arrives he sees the costume atop the wreckage and realizes that Kingpin knows he is Daredevil. Homeless and paranoid, Murdock starts to lose control of his aggression while the pleased Kingpin has him followed constantly, lost in his obsession to destroy Daredevil.

With no other options and the thought of revenge maddening him, Matt challenges Kingpin at his office, craving payback like a drug. However, in his weary and weakened state, Kingpin beats him ferociously, almost killing him. To cover his own tail and abolish his adversary once and for all, Kingpin has Matt Murdock placed in a taxi, soaked in whiskey, and driven into the river. However, being the hero of our story, Matt is able to break out of the cab and swim to shore, narrowly missing his eternal sleep with the fishes.

Injured from Kingpin’s beatings and exhausted from the taxicab ordeal, Matt stumbles his way through Hell’s Kitchen to the gym where his father used to train. He is found there by a nun, who nurses him back to fighting strength. However, the nun turns out to be his own mother, who had not been in his life for decades.

Later on, after finding out Murdock is alive, Kingpin, driven mad by Matt’s persistence, uses his never-ending connections to order a super-soldier. But firstly, Kingpin releases a mental patient in a Daredevil costume and orders him to kill Foggy Nelson in an effort to draw out Murdock. While the imposter makes his way to Nelson’s apartment, Matt, who had been following Ben Urich, learns of the plots.

When the false Daredevil arrives at Foggy’s he finds the real Daredevil, Matt Murdock, waiting for him. A fight ensues, which Murdock easily wins to save Karen Page. Upon finally seeing Matt, Karen confesses and apologizes for selling his secret identity, and Murdock, at a place beyond care for the material, accepts her apology and takes her in. Together they find an apartment, and Matt helps Karen get over her addiction while supporting them by working at a diner.

Furious at yet another failed attempt to kill Daredevil, Kingpin orders Nuke (the previously mentioned super-solider) to make an assault on Hell’s Kitchen and kill anyone he pleases. Nuke flies in on a helicopter, shoots dozens of innocent bystanders, and destroys the diner currently employing Matt Murdock.

Hearing the death of every single civilian, Murdock returns as Daredevil, wearing the costume for the first time since his apartment was firebombed, and attempts to stop both Nuke and the pilot with his only option, lethal force. After destroying the helicopter and almost killing Nuke, Captain America, Thor, and Iron Man appear to take Nuke into their own custody.

Later on, Captain America confronts Murdock, worried about the American flag appearing on Nuke’s face. Cap then breaks into some of the top-secret records kept on a computer to find out more about the possibility of Nuke being a United States government agent. Disturbingly, Cap finds out about Project Rebirth, an attempt to recreate another super-soldier, another Captain America in his iced absence.

At the same time, Nuke, outraged by his failure, escapes captivity. Curious to learn more and furious about the disastrous soldier, Cap intercepts Nuke. While fighting off some army men trying to stop both himself and Nuke, Daredevil manages to swoop in and capture the injured Nuke. Cap follows Daredevil and Nuke in a helicopter to the Daily Bugle, where Daredevil forces Nuke to confess about his involvement with Kingpin.

In the final pages of Daredevil #233, citizens groups and even senate sub-committees charge Kingpin for his crimes, but he is able to avoid most of them; the ones he does not are taken by his lawyers into years of litigation. However, while Kingpin is able to avoid any real jail time, his reputation as a businessman is destroyed. Everyone sees him for the villain he is, so he thinks about Murdock and plans his reprisal.

Those of you who have enjoyed Marvel’s Daredevil on Netflix may already be thinking of the possibilities a “Born Again” season could have. It would be dark, and the subplots would need expanding upon for the supporting characters; however, it could be one of the most transformative seasons for the entire show. Kingpin has to return eventually, and what way would be better than coming back to find out Daredevil’s identity and then tearing his life apart? That would the best return for any villain.

Additionally, we have Marvel’s Jessica Jones to thank for adding Nuke to the Marvel Cinematic Universe. With his introduction having already taken place and the people behind him being a mystery, Nuke could easily be incorporated in the connected universe to Marvel’s Daredevil for development and use by Kingpin.

But most importantly, if Marvel Studios chose to do a season dedicated to “Born Again,” could there be a possibility of a Captain America cameo? I think so. With Captain America: Civil War coming out later this year – the movie centered around the idea of the Superhero Registration Act – there could be potential for more connection between the movie and TV heroes.

We know Daredevil’s exploits have been televised and written about in the papers in the MCU so far, meaning that the members of the Avengers definitely know about his presence. Therefore, as long as Chris Evans – who plays Captain America – agreed, it could be possible to have Cap show up in a “Born Again” season, which would cement the shared-universe bond between the TV series and movies. Personally, you can give me all the Easter eggs and references you want, but it won’t feel real until I see an epic cameo.

What do you readers think? Would you like to see “Born Again” in a future season of Marvel’s Daredevil? Let us know!