Check out Our Review [WITH SPOILERS] of Agents Of S.H.I.E.L.D Season 3 Episode 11: “Bouncing Back”

The wheels have begun turning towards a Civil War… and it all begins with the Strategic Homeland Intervention Enforcement and Logistics Division. The midseason premier of Agents of S.H.I.E.L.D. may have laid the groundwork for what we can expect from the impending Phase 3 of the Marvel Cinematic Universe.

“Bouncing Back” set the pace for what’s to come, and what will most likely lead into Captain America: Civil War. So here are three takeaways from a pivotal episode in the series.

When they bring in William Sadler to reprise his role of President Ellis, you know things are getting real. Ellis’ role is used to demonstrate the US Government’s concerns regarding the growing number of Inhumans appearing around the world. Despite S.H.I.E.L.D. Director Phil Coulson claiming things are under control, Ellis is quick to react and announces the reforming of the ATCU as the Government’s answer to the Inhuman issue. S.H.I.E.L.D. becomes Ellis’ own “Black Ops” group who can continue their Inhuman search in the shadows.

As for the Inhumans themselves, we get an introduction to a new speedster (RIP Quicksilver) in the form of Colombian Elena Rodriguez, aka “Yo-Yo”. Not having the movie budget of its bigger MCU brothers, Agents of S.H.I.E.L.D. did a terrific job at bringing a “gifted” person alive without it looking cheesy. The show also mentioned – consistently throughout the episode – that the Inhumans were an “Alien Invasion.” Just remember; they’re not mutants. MUTANTS ARE NOT REAL!!!

For most of the second half of S.H.I.E.L.D., fully expect to see the Secret Warrior task force of Daisy, Mack, Lance, Mockingbird and even Lincoln traveling around the world meeting new and different Inhumans every week. It would also be a smart bet that the chaos caused by these “non-mutants” will play a part in the Sokovia Accords mentioned in the Civil War trailers. Does this mean S.H.I.E.L.D. will play a part in the movie? Well, don’t count your chickens yet.

2. A NEW VILLAIN IS MANIFESTING

So when talking about the midseason premier, you have to address the new human incubator that is Grant Ward. We know that the alien Hive is living inside Ward. It also seems that we won’t see Hive at full force until much later in the season. Right now, he’s eating a lot of prosciutto-wrapped turkey legs (or was that chopped up Inhumans? It was never addressed) and slowly regaining strength. He might also be causing a rift within HYDRA.

The big bad threat of the MCU, HYRDA got name-dropped all over the place. They showed up out of nowhere to swoop up a Medusa-powered Inhuman. Then there was Powers Booth’s Gideon Malick. While doing everything to appease Hive, he seemed to question if the ancient alien HYDRA he pledged allegiance to was really all he was made out to be. That questioning may have cost Malick his right hand Inhuman, when Hive sent out ‘spores’ toward Giyera (aka the guy from Iron Chef). Is he dead? Was he consumed and became part of Hive? I guess we’ll have to wait until next week to find out.

It’s great having HYDRA back at full force. For the first half of Season 3, HYDRA was still trying to rebuild itself from the events in The Winter Soldier (that problem couldn’t even be solved in Season 2). Now it’s back at full force and ready to be a legit competitor to S.H.I.E.L.D. Coulson even made it clear in “Bouncing Back” that his agenda was clear: stop Gideon Malick and HYDRA. Now we just need to know what happens when he realizes the body of Grant Ward is still going strong.

I’m going to end this post by going back to the beginning. Agents of S.H.I.E.L.D. didn’t begin with HYDRA, or Inhumans, or even Phil Coulson getting his new hand. It all started three months from now with an ominous image of a spaceship (or maybe just a Quinjet?) floating through space above Earth. A body in a S.H.I.E.L.D. uniform floats by, and then…BUG EXPLOSION!!!

I would assume this would be our season finale cliffhanger. Now we just need some questions answered. Who was in that ship? There was a cross floating around, but that doesn’t help us currently. Why were they in space? The Inhumans are descendants of the Kree. Was S.H.I.E.L.D. heading into space to deal with an incoming Kree Invasion? Will the Guardians of the Galaxy be involved? Why was this random scene the starting point for the season?

So “Bouncing Back” was a good starting point. The episode delivered decent action and did a nice job at setting the pace for the remainder of the season. Now all we need to see is Hive in action, more exciting missions for the Secret Warriors, and ti finally find out who was in that spaceship. It will be fun to see how this season of S.H.I.E.L.D. will progress and how it will set up the events in Civil War. Should be a fun ride. 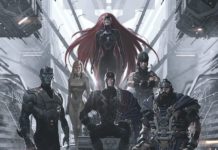 Take a Gander at The INHUMANS Royal Family!

Nova #1 Review: Richard Rider Is BACK!