I have to be honest; the recent stuff with the brothers Diggle has not exactly set my world on fire. To me, it has been one of the least interesting parts of this season of “Arrow” so going into this week I wasn’t expecting much from an episode that focused on the relationships between John and Andy Diggle. I must admit, I was very pleasantly surprised with this episode. Not only did it make me care about Andy as a character, it also provided a very cool mediation on Felicity Smoak while bringing an effective catharsis to the Diggle family drama. It also serves as a killer black ops DC Universe story worthy of an issue of Greg Rucka’s “Checkmate,” and to me, that is a very high compliment.

We begin things this week with the introduction of an organization called Shadowspire, a black ops team that the Diggles ran afoul of back in Afghanistan. Of course in the present day John Diggle has his brother Andy under lock and key, but Shadowspire is back from the past and attacking ARGUS agents. John and Lyla are called in by Amanda Waller and we are off. And hey, guess what? The flashbacks this week do not seem tacked on or frustratingly vague. On the contrary, they add to the story and fill in some blanks in regards to John and Andy’s past. This week, we get to see John and Andy’s original interactions with Shadowspire and just how corrupt the organization truly is. In truth, Shadowspire is rather bland and generic but it is just a back drop to tell Andy’s tale of redemption. Plus it is really good to take a break from HIVE for a week. 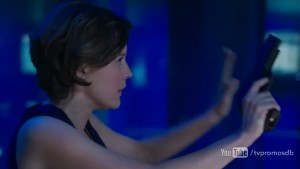 But the episode does not just have consequences for the Diggle family. This episode also may have spelled the end for one Amanda Waller. Now, let’s play the speculation game for a bit. It’s clear that the higher ups at DC Entertainment don’t want the Arrowverse to use the Suicide Squad. There has been no Deadshot, no Katana, no Captain Boomerang at all this season on any DC show (although I think Katana is coming so what do I know). I’m mentioning all this because on this week’s “Arrow,” the leader of Shadowspire kills Amanda Waller, or at least appears to. During a siege of ARGUS HQ, Waller gets shot pretty much pointblank. Shadowspire wants something called Rubicon and only Waller has the codes. The savvy leader realizes that Waller will never speak so he kills her to get Lyla to talk. The Diggles are imprisoned within the ARGUS HW and must team up to save Diggle’s brave wife.

Now, unless you think this is just a focus on the Diggles, Oliver and Team Arrow have plenty to do as well. Oliver is there as Dig’s backup. The only issue is that Felicity suffers from self doubt and cannot do her job. This is the first episode we really get to see Felicity begin her life as a wheelchair bound woman. Of course, Team Arrow relies on her mind not her body but Felicity is having medicine induced hallucinations that prevent her from being her usual brilliant self. Now, not to be a creeper, but it is very good to see goth Felicity again. She really pulls off the goth look superbly and as a recovering old school goth, let me just, say. Sigh! But Felicity isn’t happy to see her raven tressed self even if it is in the form of a hallucination. Gothlicity (I SAID IT FIRST!) brought up all of Felicity’s fears and doubts which she has to overcome in order to help Ollie and Dig free Lyla. 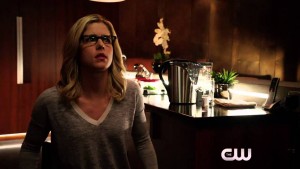 Now, let’s deal with the elephant in the room. Wheelchair bound brilliant heroic woman good at computers? For awhile now fans have been predicting that we are close to seeing the coming of a very different Oracle. That was all addressed this episode as Ollie finally gives Felicity her code name and much to DC fandom’s disappointment, it is not Oracle. I suppose Overwatch is a cool a name as any and that is what Felicity is now called – Overwatch. Going to take getting used to. There is an Easter egg with Ollie saying that he wanted to call her Oracle but that was taken. Which is very funny and it kind of confirms that there is a Barbara Gordon somewhere in the Arrowverse, but I was kind of poised for Felicity to be dubbed Oracle. One wonders if DC’s film division put the kibosh on the Oracle name as there are rumors that a wheelchair bound Barbara Gordon could appear in Batman v. Superman: Dawn of Justice. When I think about it though, it’s cool that Felicity will be able to forge her own legend as Overwatch and not just piggyback on Barbara’s legacy. 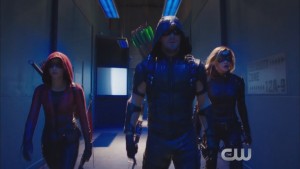 So Felicity defies her goth vision and helps her friends. Andy helps John take down Shadowspire and save Lyla and the wayward Diggle brother gets to meet his niece. A happy ending all around which was nice because “Arrow” has been rather dire lately. But we did end on an ominous note as it is revealed via flashback that Shadowspire was in league with the leader of the mysterious army so pivotal to Ollie’s season four flashbacks. Hmm, it looks like that this year’s flashbacks have finally got interesting. 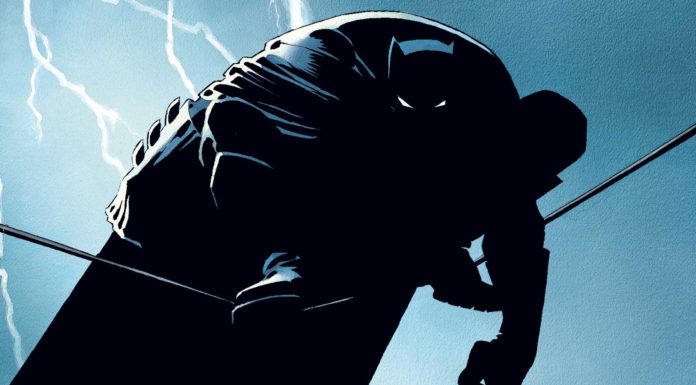 Sigourney Weaver Dishes on Her “Delicious” Villain in ‘The Defenders’

Who Is Thor: Ragnarok’s Hela, and What Threat Does She Pose to Asgard?

Justice League vs. Suicide Squad #2 Review: It’s All Quite Obvious, but a Load...