Times have been hard ever since Episode VIII was pushed back to December 2017. There is a nearly two year void until we can see the continuing adventures of the Skywalker Clan. Thankfully, the wait to head to a galaxy far, far away won’t be that long… since 2016’s holiday season brings us the first Star Wars spin off… Rogue Ones and you know what that means? Rogue One Rumors!

(Spoilers are ahead… so this is your warning.)

Very little is known about Gareth Edward spinoff film. What we have been privy to is that Rogue Ones: A Star Wars Story will be a war movie, revolving around the Rebel Alliance stealing the plans for the original Death Star. (All those poor Bothans.) The movie features an impressive cast including Felicity Jones, Donnie Yen, Alan Tudyk and Mads Mikkelsen. Also… that’s it. Disney and Lucasfilms have done a great job at keeping details under wraps and the momentum surrounding The Force Awakens has kept fans from asking too many questions.

However much like stealing Death Star plans, the folks over at Joblo have allegedly unearthed some minor rumors surrounding Rogue One. Until something official comes out, take everything with a grain of salt… but there are some fun idea here.

-Rogue One will feature “Shadow Stormtroopers”

The rumor mill starts with reports of black Stormtroopers appearing on set. They are referred to as “Death Troopers”. In the old canon, Shadow Stormtroopers were basically the “Seal Team Six” of the Empire, participating in covert missions and simply being better than your average trooper. It would make sense that if the Empire wants to keep their Death Star plans a secret, they would send out their top group.

-Darth Vader will have a major role

Sure you can go with Inquisitors, or a Moff, or some unknown Sith apprentice, but why not just bring in the Alpha Dog to take care of business. The rumor of a Darth Vader appearance is not new, but knowing he could have a larger role is mouth watering. In the official canon, only the book Lords of the Sith delves into the badassery possessed by Vader. By allowing him to show off his skills in Rogue One, we can get a better understanding of why he is so feared by the rest of the universe at the beginning of A New Hope.

-There could be a new droid to love

C-3PO & R2-D2 are classic. BB-8 was amazing. Chopper from Star Wars Rebels… another fun robotic addition. So it shouldn’t come as a surprise that Rogue One would introduce us to another potential fan favorite droid. The report claims the new droid is a two-legged droid with long arms and legs that formerly was part of the Empire before being reprogrammed. It goes on to say the new robotic companion may be played by the always entertaining Alan Trudyk. If that is his role, it should come as no surprise that once again it’s a droid that will be the “scene stealer” in a Star Wars movie.

The report continues to talk about new versions of TIE Fighters and AT-AT’s, as well as potential character names. Until anything in confirmed by an official source, this should all be treated as fan fiction. Still, it’s fun to imagine Darth Vader and Shadow Troopers fending off the Rebel Alliance. I guess we’ll find out what’s really in store for Rogue One when it hits theaters December 16th.

So let us know what would you like to see in the first Star Wars spinoff? 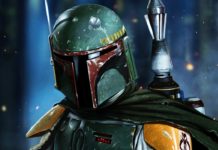