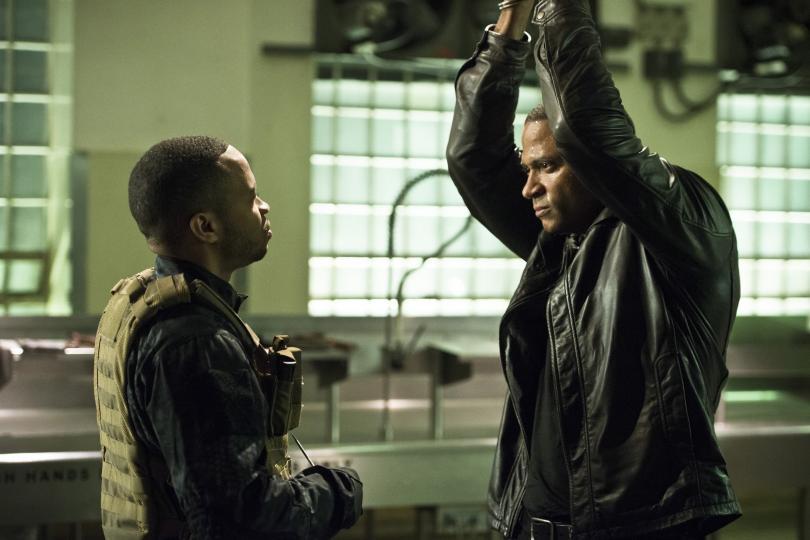 Check out Our Review [WITH SPOLIERS] of Arrow Season 4 Episode 20: “Genesis.”

Fans of Arrow have had a rough go of it these past few weeks with sappy and inconsistent storylines combined with questionable character choices and going nowhere plot threads (I’m looking at you, you stinky, stinky flashbacks). But this week’s episode rights the ship somewhat as Oliver Queen does his best Stephen Strange impression and John Diggle finally pulls the trigger- literally.

These days, you know what my two favorite words to hear on Arrow are? John Constantine. And those are exactly the words that send Oliver on a quest to meet one of Constantine’s shaman pals. This shaman is not what Oliver and Felicity expect as the two meet a blackjack playing, exotic beauty who teaches Queen about the finer points of dark magic defense. Now, Green Arrow isn’t exactly the most mystical hero in the DC Universe, but somehow it all works. Maybe it’s the earnestness of the performances, but I really bought this Latina mystic as Oliver’s magic coach. She gives Oliver some tips on how to face down Damien Darhk and Oliver is off to save Diggle.

And Diggle needs it because once again he cannot pull the trigger to take out his brother Andy. A few weeks back, Diggle’s mercy cost Laurel her life, so this week a fighting mad Diggle goes after his brother alone. The elder Diggle takes down the younger but once again hesitates with the killing blow. When Darhk comes a calling, this now puts Lyla and baby Sara in danger as Darhk and Andy go after Diggle’s family. Luckily, the newly magically enhanced Green Arrow and Felicity show up and save the day. Darhk tries to use his power against Oliver, but now GA knows that positivity, calmness, and lightness will defeat Darhk’s black magic. Oliver resists Darhk and the evil mage retreats. Meanwhile, Diggle takes down his brother again, but this time, he puts a bullet in Andy ending that ceaseless plotline once and for all.

But it is not all a victory as Darhk steals a device that can take control of a nuclear arsenal so he can begin Genesis. What is Genesis you ask? Well, it seems it is a man made underground city that Darhk plans to raise in order to replace the civilization he will soon wipe out. How do we know that? Because Thea Queen went on a nice vacation with her beau and it turns out, boyfriend is an agent for Darhk and Thea is now trapped in Genesis. This is a nice, claustrophobic Wayward Pines-like B-plot that puts Thea in the thick of Darhk’s plans.

So with nuclear Armageddon imminent and Thea trapped in Genesis, a very awkward and small stakes season suddenly got very big.

A welcome step back in the right direction.

Angel of Death George RR Martin Weighs in on 2016