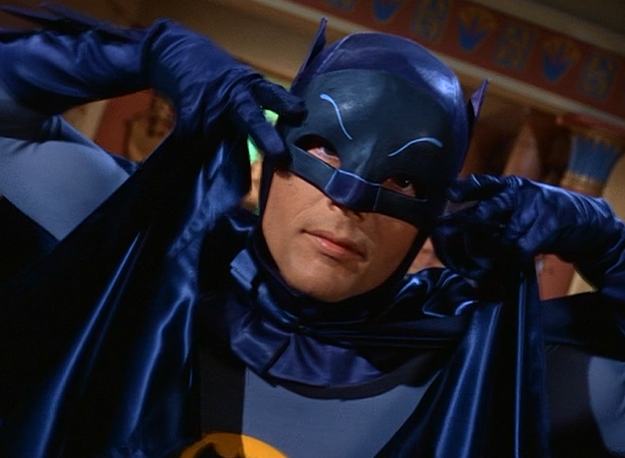 Yes, with every episode, and with every over the top, purposely obvious trope, Batman and Robin found themselves at the mercy of a recognizable rogue played by an upstanding star of stage and screen.

Burgess Meredith’s Penguin, Cesar Romero’s Joker, Frank Gorshin’s Riddler, and Julie Newmar’s Catwoman usually had Adam West’s Batman (and Robin. DUH!) properly hog-tied and dangling from a rope just above a tank/pool/pit filled with something spikey and/or alive and hungry. These scenes, these hokey, hammy cliffhangers took the already exaggerated reality of comics and mercilessly magnified that pre-baked exaggeration. Basically, the Batman TV series of the ’60s was comic books on proto-crack cocaine.

Supercilious, ridiculous and outlandish, the Batman TV series perpetuated the former attributes by playing it serious. Adam West’s Batman was a super-serious fellow who dealt with, in all seriousness, the unabashedly moronic, comedic machinations employed by boisterous rogues who were equally serious in dipensing their ridiculousness. Batman was truly invested in unraveling The Riddler’s riddles, deflecting Catwoman’s wiles, and perfecting his aerial before an agreed upon surf-off with The Joker.

And it still works. All of it. I recently rewatched several episodes, and like a neon throw-rug patterned with camels wearing sunglasses, this overly cheesy, self-aware TV classic somehow makes the room work, successfullly hiding any stains due to it’s robust pallet of cooperatively clashing colors.