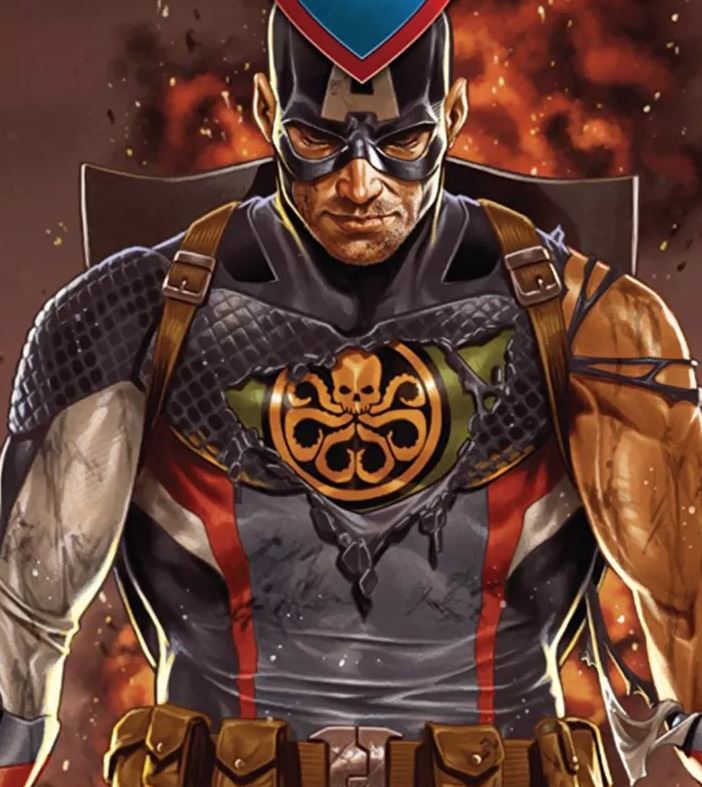 With the release of issue #0, Cap’s endgame made one heck of a terrifying first impression. However, this does beg the following question: with Captain America going against the other heroes, and the new image for Marvel Legacy showing the Cap we all know and love, how is Secret Empire going to end?

There are a number of possibilities that could end “Hydra-Cap’s” reign of terror. Will our heroes be able to snap Cap out of this madness, or will more drastic measures need to be taken? Is Hydra watching? NO? Good, then it’s safe to consider five ways Secret Empire could end!

If we look back on Civil War II, you’ll remember Ulysses, an Inhuman who could see the future. One of the visions he showed the heroes involved Spider-Man (Miles Morales) standing over Captain America’s corpse. Of course, not knowing that Cap was a Hydra agent, they presumed Spider-Man would murder him at some point in the future. In the end, the war ended and Miles didn’t kill Steve Rogers, which disproved the vision…or did it?!

While everyone was wondering if Miles was going to kill Cap, Captain America was looking at other details related to the vision. Captain America discovered that the future in Miles’ premonition was one where Hydra conquered America. With that in mind, there is still a chance Spider-Man could take the life of the now corrupted Captain America.

Only problem is, we don’t know if we can trust Ulysses’ vision. As we learned, his visions aren’t always 100% accurate and they can be manipulated. Considering that Ulysses is also gone now, there’s no way to prove the vision could be accurate unless it comes true. As of now, nothing’s set in stone, but it’s a detail we may need to remember. How does that link up with the Captain America we see for Marvel Legacy? Well, maybe Marvel’s Generations will clear that up.

The way “Hydra-Cap” makes it sound, Steve Rogers is aware he was altered by Red Skull. The only problem is, he just doesn’t seem to care! This version of Captain America is so deeply rooted in the sinister ideals of Hydra that learning this changes nothing. But the Cap we’ve known for years has to be in there somewhere, right?

Knowing what we saw in the image for Marvel Legacy, we know that Captain America may go back to being the good guy again. Only question is, if that’s really the case, how could that happen?

Maybe, just maybe, the heroic spirit that we know and love is slowly trying to claw its way back. Maybe the more the other heroes plead with Hydra-Cap to remember himself, the stronger that spirit becomes. Perhaps the true final battle of Secret Empire is actually a fight between the two sides of Captain America. Is it unlikely? Maybe, but I prefer to believe that the essence of Captain America isn’t gone, it’s just buried.

Needless to say, Captain America seems to have most of the bases covered in Secret Empire. In issue #0, Cap has already taken out most of the heavy hitters off the table. There are other heroes who’re still operating, but I think Hydra-Cap has something planned for them, too. But out of all of them, there may be one group that he hasn’t accounted for. That’s right, I’m talking the the Fantastic Four!

Since Reed Richards, Susan Storm, and the Future Foundation kids are exploring the multiverse, it’s possible they could show up and put and end to this. It could also be possible that Reed could undo Cap’s transformation. If any one man could do it, he can!

It’s probably the least likely thing to happen, given Marvel’s feud with Fox over the FF’s movie rights. Still, we can always hope that Sue, Reed, Ben and Johnny will return as the Fantastic Four!

(P.S. Little spin-off theory: since Doctor Doom is Iron Man now, he could stop Hydra-Cap! It’d be interesting to see a villain that went good fight a hero that went bad!)

Since Kobik (the living Cosmic Cube) was the one that made Captain America this way in the first place, it only makes sense that she undo it! Kobik’s ability to rewrite reality is almost unrivaled, and with the Red Skull dead, there’s nobody left to manipulate her. Only problem is, as we learned in Captain America: Steve Rogers #16, Kobik has been taken out of play.

The shards that made Kobik were separated and Dr. Selvig (who’s gone crazy now) sent them off to parts unknown. So, that should debunk this theory here and now, right? Well, the only thing is, we don’t have a clue where Selvig sent the shards!

If they’re on Earth, then there’s a chance they’ll be found and Kobik will be revived. If they’re in space, Hydra can’t get them without lowering the force field around Earth, which would jeopardize the plan. There seem to be a lot of unknowns here that could lead to Kobik’s return, and her subsequent undoing of all that pesky reality-warping. Maybe none of that will happen, but if you ask me, I don’t think we’ve seen the last of Kobik.

So, during Secret Wars, the Ultimate Marvel Universe was destroyed and Miles Morales was its only survivor. He was folded into the main Marvel Universe and even acclimated to it like he was always part of it. But, my friends, what if I told you he might not have been the only one to survive the “transition?”

Recently, we’ve been starting to see some familiar faces from the Ultimate Universe. X-Men Blue #1 featured a backup story with a blonde Wolverine fighting Wendigos. Many believe this Wolverine is Jimmy Hudson, the son of Ultimate Wolverine. But that’s just an original character; it’s not like he’s a doppelganger, right?

Well, over in Unworthy Thor, we saw a mysterious figure calling himself “War Thor” pick up the Ultimate Universe hammer. The popular theory is that this is Ultimate Thor!

So, keeping in mind that there are more Ultimate Universe characters running around than we thought, could there be more? If that’s the case, then it’s possible that Ultimate Captain America made his way to the proper Marvel Universe!

Stick with me here: maybe Ultimate Cap has actually been around since Secret Wars, but decided to go into hiding Maybe seeing Hydra Cap’s assault on the world is enough to get him to do something about it. From there, he could work with the other heroes and eventually face Hydra-Cap one on one! The result? Ultimate Cap defeats Hydra Cap and takes his place as the heroic Captain America!

A wild theory, I know, but it begins to make sense when you consider the following:

Since the revelations from Steve Rogers: Captain America and Secret Empire, Cap has dipped his hands so deep into the villain pool it’d be hard to redeem himself! And, it seems he isn’t concerned with redemption. Either way, it seems this Steve Rogers has passed the point of no return. However, we’re still getting a more traditional Captain America by the look of Marvel Legacy.

This this would be a way for Marvel to have its cake and eat it too. With Ultimate Cap, they would be able to keep the interesting aspects of a villainous Captain America, while also having the more heroic version. Of course, it would be confusing to have them both around, right? Unless…the fight between the two ends up disfiguring Hydra Cap, giving him…a “red skull”?

As of now, it’s too early to tell exactly how Secret Empire will end, but we can still come up with some intelligently concieved theories. And before it ends, we’ll just watch the madness unfold as Secret Empire continues!

Did you like my theories? How do you think Secret Empire should end? Let me know in the comments below!