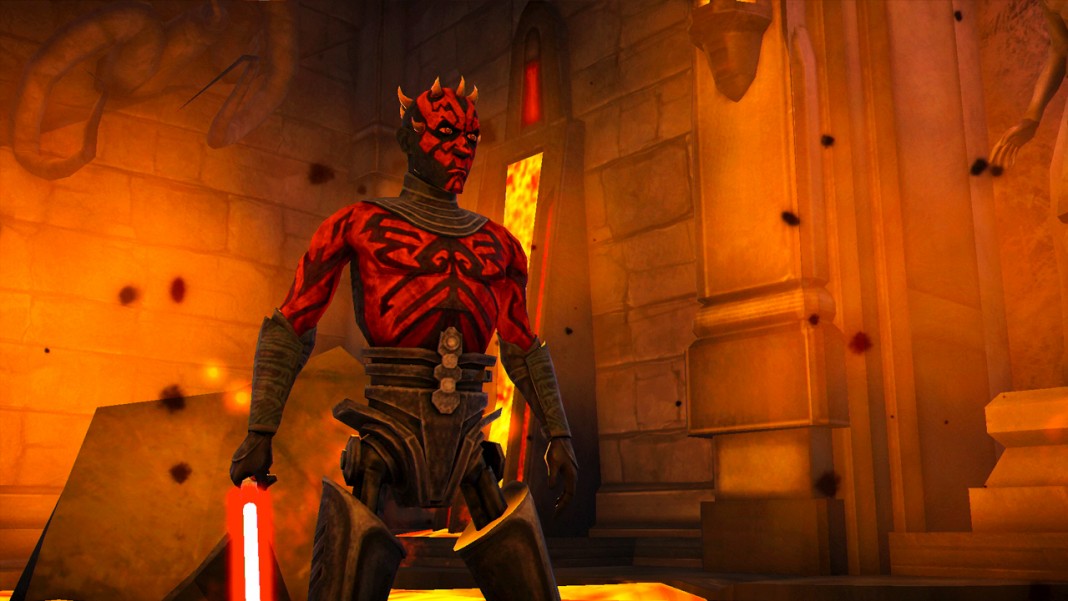 With only one episode remaining of this season’s Star Wars Rebels, something big (or rather someone big) is coming to bring chaos to the galaxy. It is confirmed that Sith Lord Darth Maul will reemerge as a dark obstacle for our Jedi heroes.

Entertainment Weekly confirmed that the duel lightsaber-wielding Zabrak will make his first appearance on Rebels next week on the hour-long season finale. It’s the first time Maul will appear in the Star Wars Universe since his multi-story arc on The Clone Wars, which ended with him going head-to-head against his former master Emperor Palpatine (things did not end well for Maul or his brother Savage Opress). The last time we saw Darth Maul, he was defeated… and being zapped repeatedly by Force-lightning.

Now he’s back, and as Rebels Executive Producer Dave Filoni explains, bringing Maul on board opens up new opportunities. This includes a Sith showdown that would satisfy any Fan Boy craving.

“The genesis of this idea is actually kind of an interesting one,” Filoni told Entertainment Weekly. “I had pointed out several times in story meetings that we have an opportunity – if we wanted to – to actually have Darth Vader fight Darth Maul.”

Darth Maul vs. Darth Vader. You probably didn’t wake up this morning thinking that showdown was even a possibility. While the idea of Sith-on-Sith action seems amazing, Filoni was quick to throw water on that idea.

“…but you know we were very careful that we don’t just do things because they’re cool. We want to do things that are story driven.”

So while a Maul/Vader battle isn’t in the cards, there are other plans for Darth Maul on Rebels. That includes getting inside the mind of young Jedi padawan Ezra Bridger. In a clip of next week’s episode, we see Darth Maul encounter Ezra inside a Sith Temple, talking about how he is broken since the Sith took everything from him. But this sounds like a ploy to befriend the young Jedi. So, could Ezra be the key to Maul finding his dark powers yet again? Are we at the dawn of the Knights of Ren? Why was Ezra holding a crossguard lightsaber?

It appears the impressionable Jedi-in-training is tampering with thoughts of the Dark Side. Darth Maul could be the spark that ignites the fiery path for Ezra… leading him into the arms of the Sith. Filoni explains that has been an underlying story throughout Season 2 of Star Wars Rebels.

“This whole season has been about getting Ezra to kind of explore the Dark Side of the Force and be aware of its existence on a powerful level that maybe he didn’t understand before. It’s really kind of an Empire Strikes Back movement for the series, where we bring the Dark Side out more to our heroes and challenge them with it. It’s going to get pretty crazy before the end here.”

Bringing out the Dark Side now includes Darth Maul. What that means for the crew of The Ghost and the young Jedi Ezra remains to be seen. I guess we’ll have to tune into the Season Finale of Star Wars Rebels to find out.