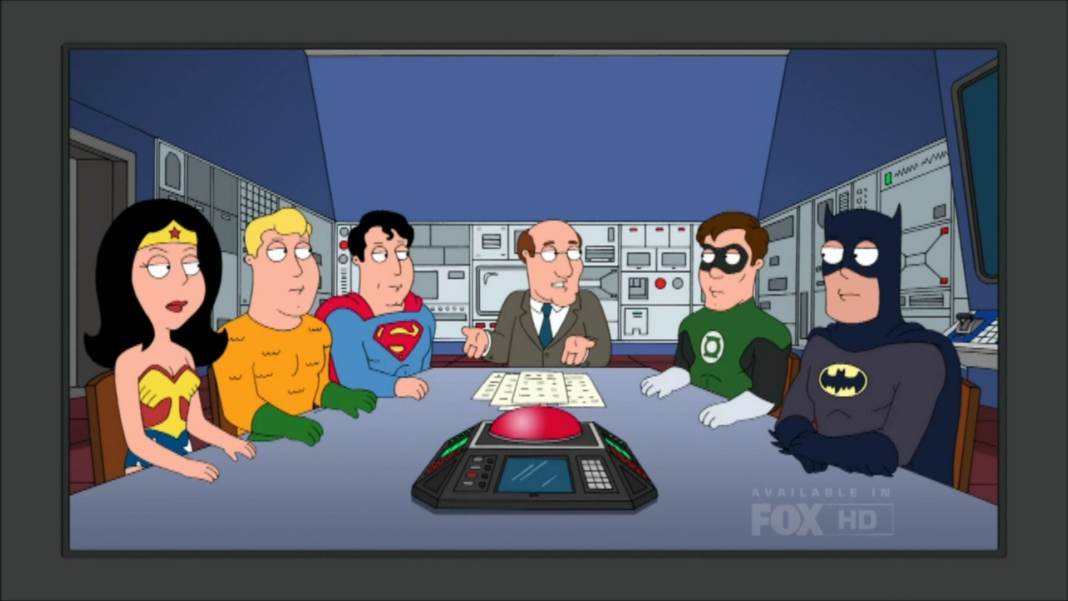 One of my favorite TV comedies is Family Guy. Sure, it isn’t exactly the highbrow humor you’ll find on Scandal, but the show makes me laugh every week. Showrunner/star Seth Macfarlane (Peter, Brian, Stewie, and various minor characters), and the rest of the writing staff and crew, do a great job poking fun at every aspect of pop culture. I just love all the references and cutaway gags that fill the show (they’ve cut them down in the past few seasons), and I really love it when they mention or refer to comic books or movies. Just last week, in the episode “Passenger Fatty-Seven” they mentioned the X-Men…

With that, let me give you the list of my favorite comic book references from Family Guy. At least the family friendly ones…

Spider-Man Reminding Peter “Everybody Gets One!”

This old chestnut. In one of the most memorable gags from the season 2 episode titled “Let’s Go to the Hop,” we see Spider-Man coming to save the day when Peter Griffin falls off a roof. He plainly reminds Griffin that, “Everybody gets one!”

It was so memorable, they gave it a callback in season six’s “Believe It or No, Joe’s Walking on Air.”

This gag was so well known, Spider-Man said the same thing to a New York citizen in The Amazing Spider-Man #600.

In the whole pantheon of the Justice League, it seems like every hero brings something to the table. Superman has strength, Batman has the brains, Wonder Woman has the battle strategy, and Flash has the speed. What does Aquaman add to the group? Talking to fish with some sass as seen in season five’s “The Father, the Son and the Holy Fonz.”

Superman II Has a Confusing Moment

As seen in the fourth season’s episode, “The Cleveland-Loretta-Quagmire,” Peter points out to Quagmire that in Superman II, the Man of Steel utilizes a confusing attack method that is never explained: using the cellophane “S” to net Non. He’s never done that in the comics, or any movie before or after.

In the episode “Hot Shots” from season 15, the family doesn’t vaccinate Stewie, fearing the vaccinations might give him Autism. The family eventually decides to give Stewie the shots. However, Peter destroys all of the vaccinations a la Joker in The Dark Knight. The scene is recreated perfectly.

A Guy in a Coma Thinks of Predator Vs Batman, Which Actually Happened

Hate to break it to the guy in a coma in season nine’s “Brian Writes a Best Seller,” but that idea was already taken from DC and Dark Horse in 1991.

In season seven’s “420,” Peter mentions he loves movies that say the title of the movie within the movie. I’d have to watch Superman IV: The Quest For Peace again just to make sure.

Once in a while, Family Guy will do something fun, like recreate the intro to a classic TV show. The 70’s TV serie The Incredible Hulk, starring Bill Bixby and Lou Ferrigno, got that treatment in season nine’s “And I’m Joyce Kinney.”

Give Stewie credit for finding the Bat Cave in season ten’s “The Blind Side.” It looks to be based off the Tim Burton design from the 1989 film. Seriously, if someone asked me to build a Lazy Susan for their nuclear-powered car, I’d be telling someone about it.

While the show pokes fun at some of our favorite shows, movies or comic book characters, sometimes (and I strongly emphasize sometimes) you can tell it is out of love and admiration. Instead of the usual opening in season eight’s “Family Goy,” they recreated the intro to the 70’s animated series Super Friends, which featured the Justice League and the Wonder Twins. Sure, Batman, Superman and the rest of the DC Universe have been the butt-end of plenty of jokes on Family Guy, but this shows the Family Guy creators respect them as characters.

I am sure I missed a few (like the S.S. More Powerful than Superman, Batman, Spider-Man, and the Incredible Hulk Put Together) or an NSFW clip of Wonder Woman on her invisible jet. Let me know what your favorite Family Guy comic-related moment is in the comment section below.