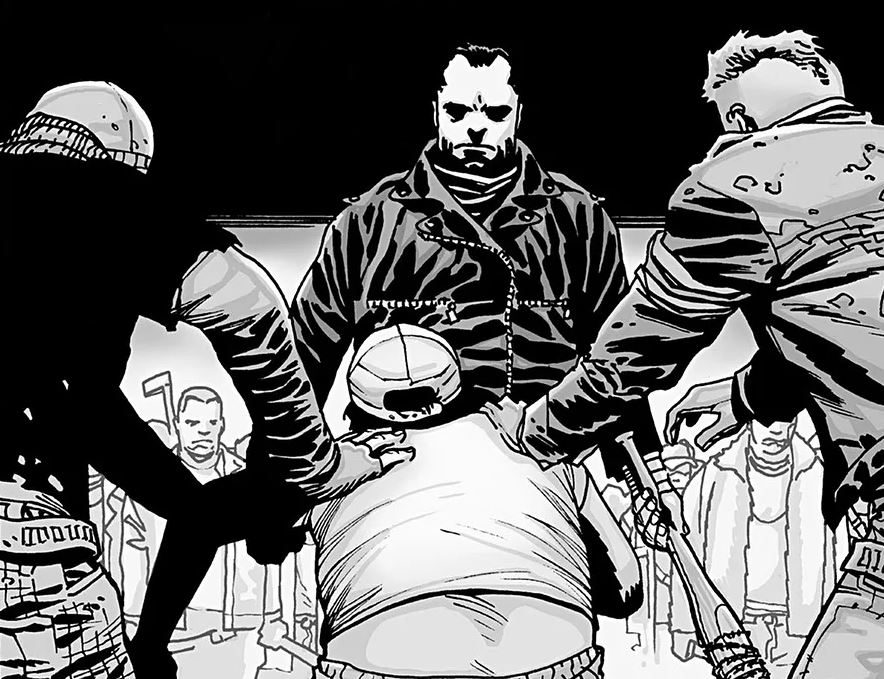 The Walking Dead Season 6 offered the epitome of nail-biting cliffhangers. Negan swung his trusty bat, Lucille, and brained the HELL out of…someone. That’s right; we have no freaking clue who he skull-bashed to smithereens, and we have to wait until The Walking Dead Season 7 debuts on AMC this October. Sure, we have a few ideas regarding the victim of Lucille, but we really don’t know. Not for a fact, anyway. Thankfully, our good friends at Entertainment Weekly procured the very first image from Walking Dead Season 7, and granted us a few sparse details regarding what to expect immediately after Negan wipes the brain-sauce from his trusty, sweetly named baseball bat.

Why does this look familiar? Because Season 7 picks up right after the “event” in Season 6.

“Yes, who was at the receiving end of Negan’s bat will be revealed in the first episode,” confirms executive producer Greg Nicotero; he directed both the season 6 finale and the season 7 premiere.

And Negan certainly has more pontificating to get off his chest because, well, that’s Negan.

“Negan is that kind of guy,” says Nicotero. “He’s the kind of guy who imagines himself on stage at a high school production and he loves every second of it. So, I don’t really see a lot of quiet contemplative moments with Negan. I feel like with Negan it’s really going to be about him gesticulating and him sort of relishing in the sound of his own voice while he commands the stage in front of whoever’s alive.”

You ready for The Walking Dead Season 7? Any ideas who Negan brained to death? Sound off!