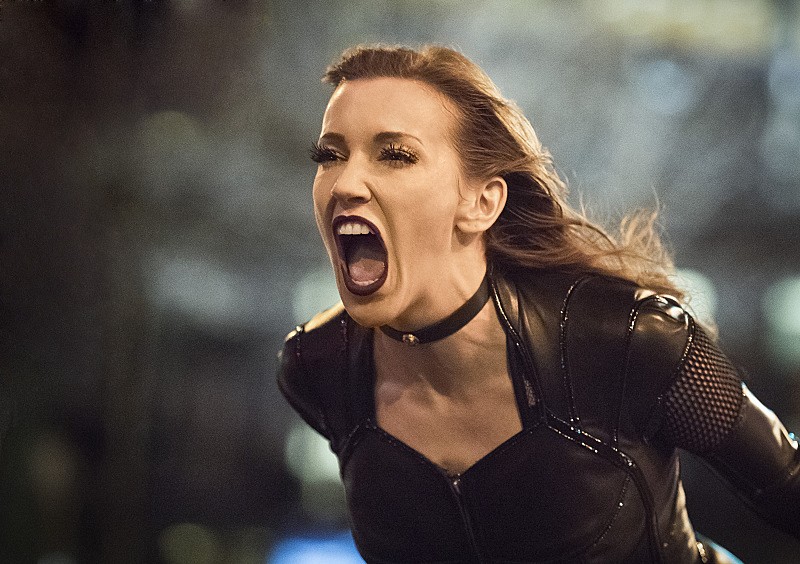 Check out Our Review [WITH SPOILERS] of The Flash Season 2 Episode 22: “Invincible.”

Part epic, part giant waste of time, this week’s episode of The Flash delivers a summer blockbuster, comic book crossover bogged down by manufactured angst in a fun but emotionally bloated installment.

So, Barry Allen is back after his foray into the Speed Force and he’s feeling good about himself. He’s feeling very good because he has his speed back and he’s ready to take the fight to Zoom. Just in time too, because Zoom has summoned an entire “Who’s Who” army of Earth-2 metahumans to take down Central City and Team Flash. Leading Team Zoom’s charge is the Black Siren, the evil Earth-2 version of Laurel Lance played by Katie Cassidy. Now, I thought this would have huge repercussions for Arrow now that a Laurel is back walking amongst the living, but no, Black Siren is just kind of there. Cassidy looks great as the goth-version of the Canary, but she just wanders around and blows up buildings with her Siren Cry.

Meanwhile, Barry’s friends are warning him not to be too confident. Barry is feeling on top of the world because the universe has basically just resurrected him as a metaphysical speed entity! Yeah, cool right? Instead of just going with it, the episode decides to mire Barry in endless warnings from his friends about getting too overconfident. And he really isn’t; Barry is just secure in his own abilities. The episode has enough drama and conflict that all these scenes are just wasted.

Anyway, you know the drill. Cisco, Kaitlin, and Harry Wells whip up a doodad to defeat the Earth-2 baddies, a bit of sonic fluff-doodle that requires Barry to run, Barry…run. Cisco and Kaitlin disguise themselves as their Earth-2 counterparts Reverb and Killer Frost to distract the Siren, and Flash wins the day by not only taking down the entirety of the Earth-2 Legion of Doom, but also forcing Zoom himself to retreat. By the way, Cisco manufactures a new power and it is really awesome.

There is also a fun subplot of Wally West going vigilante in honor of the Flash. Because Flash saves Wally’s life, Wally wants to serve his fellow man. Of course, Joe West doesn’t want his son in danger, but Barry convinces Joe that Wally is just trying to do the right thing. All this allows Wally to grow as a hero before he reaches his yellow-suited destiny. Hopefully, that will happen this season as I really enjoy Wally and his earnest heroism.

Sounds uplifting right? Not so fast. It turns out Zoom is back and during a Team Flash dinner party, the villain returns and kidnaps Henry West. Zoom takes Barry’s dad back to their old house…and murders him. For reals. Now hopefully, next episode will have a timey-wimey fix to this because, really, do we have to get this morose? The whole scene is so over the top melodramatic that it robs the ending of any semblance of emotion. It was more like, “Oh, so this happened now?”

I kind of expect more from The Flash than shock drama, so what should have been a highly regarded episode drops to…. 3 stars.