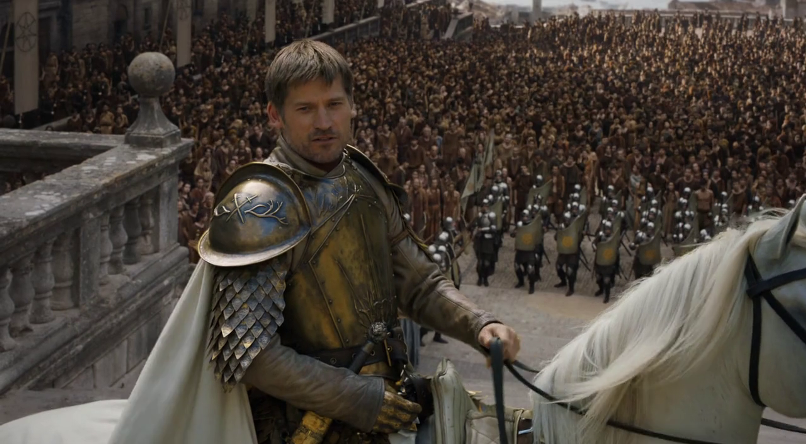 Choo-choo! All aboard the Game of Thrones express and this latest episode ‘Blood of My Blood’ is a little lower key than the previous episode but that doesn’t mean that this episode was dull or slow in any shape or form! This week’s episode, ‘Blood of My Blood’, has some relatively big moments that are touched upon but not really explained. What sort of stuff? How about the return of a Stark that isn’t dead(well, maybe he’s a little dead), a Faith Militant shake-up, and Daenerys doing her very best Avatar impression! That ‘Last Shadow’ thing is really good for rallying the troops, no?

Of course ‘Blood of My Blood’ had to pick up at the end of last episode…which I’m still pretty sad about. We saw Brandon Stark and Meera attempt to fly the undead but the thing is about the undead is that they never really have to rest! All seemed lost and then BAM! A character we all expected to show up during that whole Crastor’s Keep Mutiny showed up! In the books the character is referred to as ‘Cold Hands’ and is for all intents and purposes a ‘good White Walker’. Heavily implied in the books as Benjen Stark, ‘Blood of My Blood’ didn’t mess around and immediately established this ‘new’ character as Benjen Stark! I relatively enjoyed his intro but I would love to know more about his back story from his introduction in the first season of Game of Thrones to now. He certainly seemed to have a good grasp on things, no? What did those Elves do to him! TELL ME!

The next stop is the Sam and Gilly component of the story and I feel like it is one of the weaker aspects of the show. Not to be knocking it, it just seemed like there was half of this episode spent establishing what kind of asshole Sam’s dad is…only for him to just snag his ancestral Valyrian steel blade and take off with Gilly! So…what was the point of all of that? A free meal and seeing ol’ jerk dad? I would hope that there is more to this later on it just seemed like it could have used more editing. I probably shouldn’t be so surprised considering we saw a scene of Sam throwing up in a bucket for 10 minutes. Sounds about right, right? I just wish Sam would have stood up to this father…you would think killing a mythical undead creature would put a little extra spring in your step.

Another plotline that seems to be going off the rails(which is a good thing) is that of Arya and the House of Black and White. Through this entire story arc it seemed to be that Arya was just doing what was expected of her and that whole assassin-mythos wasn’t something she quite believed in. The House of Black and White was simply a stepping stone to the skills she wants and not something she wants to follow blindly. You could tell that by the way she ruined her own assassination attempt. I don’t think you can have a heart in that line of work, you know? It will be interesting to see where that goes and I think we all secretly want to see Arya kill the Waif. Of course this could all be part of her ‘training’ and she could be doing exactly what she needs to be doing. ‘Killing Arya Stark’ might be more metaphorical…or literal knowing how Game of Thrones works.

Things continue to go sour for the Lannisters at King’s Landing. Setting up their little action to rest the Queen from the Faith Militant, the Tyrell army and Jaime Lannister roll up to the Sept of Balor and…get totally put in their place! Probably not what they were expecting but I’m sure Margaery has something up her sleeve. Both Tommen and Margaery are with the Faith of the Seven while Circe and the rest of the Lannisters are left out? Again, I’m not quite sure where the end game is with this but I’m sure it is more ruin for the Lannisters. Those guys are like the 2nd string Starks when it comes to whipping boys but I think we all can agree that they kind of deserve. At least Joffery would have dealt with those Faith Militant, right? Ugh. Never thought I would write something like that!

With that ‘baby coup’ stalled, Tommen orders Jaime to assist Walder Frey in order to take back the Riverlands. You might be familiar with that name as the House of Tully, where Catelyn Stark is from. Apparently, the Blackfish(hooray for him coming back) has retaken his home and pushed out the traitorous Freys. I had wondered what had happened to him and Edmure Tully after the Red Wedding and it looks like the Blackfish is fighting while Edmure is spending him time in the dungeons. I wonder what happened to Edmure’s wife? Did they throw her in there as well? Joking aside, it is nice to see the Freys return. We’ve all expected them to get their ‘comeuppance’ at some point and as I can say as a Game of Thrones book reader is that we should probably approach that with a ‘stone heart’. See what I did there? Ugh. Terrible! Still…I wonder what the Brotherhood of Banners has to say about all this, eh?

‘Blood of My Blood’ then ended with a scene of Daenerys leading her newly acquired Dothraki army across the desert when she decides to go run off by herself for a little. Did she need some free time? Bathroom break? Nah, apparently she just had finished watching Avatar and decided the best way to keep up that Dothraki momentum was hit them with the ‘Last Shadow’ effect. Hey, it worked for Sam Worthington so why not the Breaker of Chains? All in all, ‘Blood of My Blood’ was a slower episode but it definitely continues to set the ground work for things to come. Half-Undead protectors, Dothraki Armies crossing the sea, Arya facing off a guild of assassins, and I’m sure more throwing up in a bucket scenes for Sam. Hooray!