Home TV Reviews Game of Thrones Season 6 Episode 9: “The Battle of the Bastards” 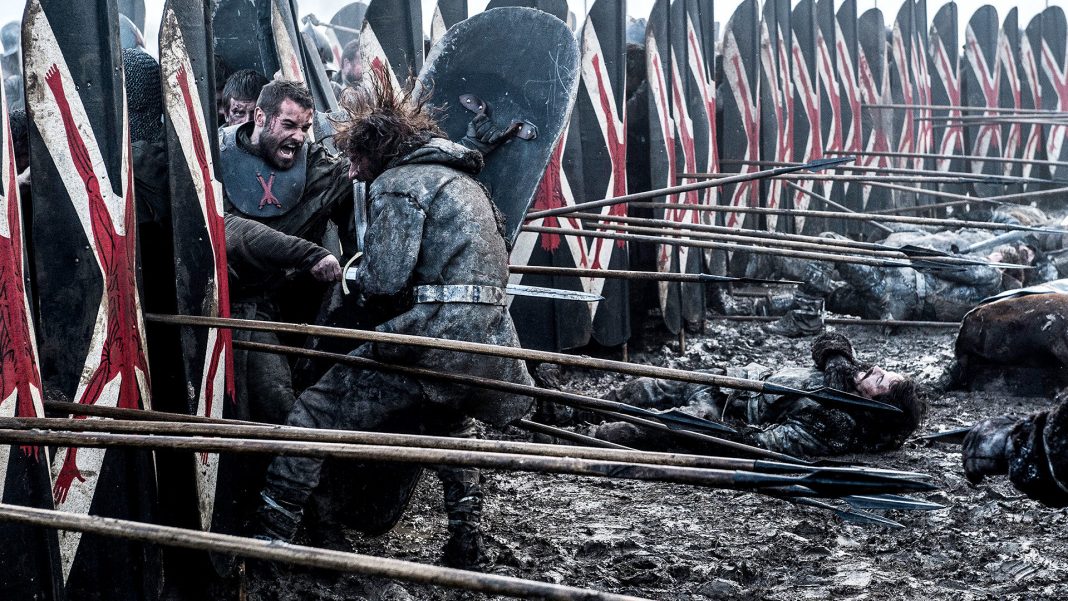 First things first…”The Battle of the Bastards” was one of the finest episodes of Game of Thrones ever. EVER! It’s up there with Hardholme, The Rains of Castamere, and the Battle of Blackwater. Judging by the internet’s reaction it seems like that assumption is generally correct! So what kind of things did we get in ‘The Battle of the Bastards’? Well, we basically had two epic battle scenes and one brief scene involving the early set-up of Dany’s Westeros alliance!

Game of Thrones previous episode was one of the slower of the season but after watching ‘Battle of the Bastards’ I can understand why. As far as GoT episodes go, this particular episode was dense. Simply two major battle scenes and two minor ones that acted as a supplement to the greater battle scenes. These scenes would be the Ser Davos one and the Greyjoy one. The Ser Davos scene was particularly well shot with his horrifying realization that his Princess Shireen was sacrificed by the Red Witch. What stuck with me was how the sunset looked as the camera panned back away…I said out-loud ‘Wait, what’s on fire?’ before I realized it was the sun. Effective use of colors and angle that’s for sure!

The second supplemental scene, the Greyjoys, was also quick but set up tons of stuff. Who would have thought a season ago that Theon and Yara would have been in an alliance with Dany, right? But here we are! I think one of the gripes I had seen about this season of Game of Thrones was that traveling doesn’t seem to take all that long. An episode ago we had Yara and Theon sailing to Mereen and in this episode BAM! Alliance brokered! A small gripe and one I’ve overlooked but you know how the internet can get! I think I had enough filler episodes with Sam and Gilly. Joking aside, I really can’t wait to see more Yara and Dany. That’s a powerful duo right there and those two people could(probably ) take over the world. My guess anyways!

Okay, so the bull in the china shop…the massive battles! I rather enjoyed this episode’s structure. Within the first 20 minutes I was already satisfied. That whole interchange with ‘who is surrendering’ was totally rocking. At first, I didn’t like how Tyrion was afraid of Dany’s response but that moved quickly along and without much focus. I was worried that Tyrion was going to get yelled at or cast out. Luckily for us, we got to see him berate ‘The Wise Masters’ for their treachery. Oh, and dragons. DRAGONS! I think we’ve all been waiting for these guys to reach ‘living siege weapon’ potential for how many seasons and there was the pay-off. So good!

Of course an episode called ‘The Battle of Bastards’ wouldn’t be such without Ramsey Bolton and Jon Snow. This has been building for a long time and emotions were running high. Everybody wanted Jon Snow to win and everybody wanted Ramsey to loose but how would it go? Would it be a crushing victory, a Pyrrhic victory, or a soul crushing loss? Well, it looks like it could have been any one of them! I’ve seen people complaining about the whole ‘Rickon didn’t zig-zag’ argument and I don’t think they really realized who they were dealing with. Ramsey is a crack-shot with a bow…all of those ‘missed shots’ were psychological warfare meant to draw Jon Snow out of their defenses…and it worked! Jon Snow would have been killed(again) had it not been for Sansa’ power play to recruit the Knights of the Vale.

I wanna say that ‘Battle of the Bastards’ featured some of the best fighting choreography I’ve seen on a television show. It conveyed the absolute chaos and anarchy of melee combat and I felt palpable anxiety watching it…particular that scene where Jon Snow was being trampled. I got the distinct impression that ‘The Lord of Light’ is watching over him as he luckily dodged death all around him. Seriously, I really loved this episode of Game of Thrones and I can’t wait for the next one…even though that means we’ll have to wait another year for more Game of Thrones!