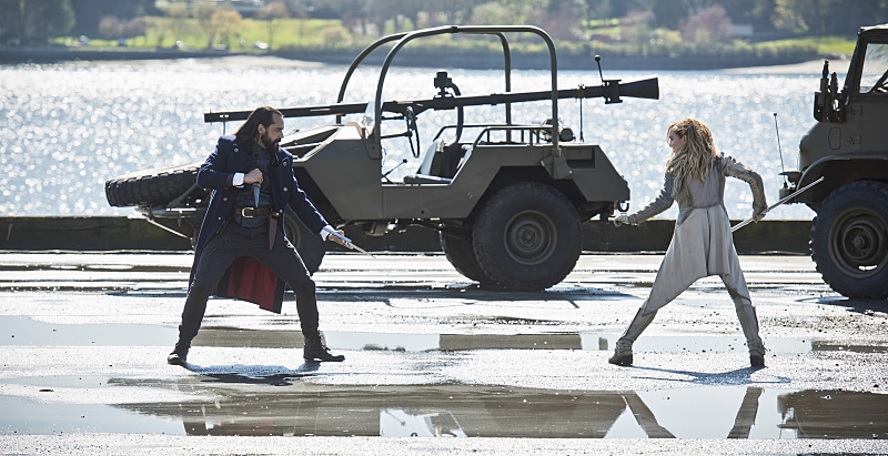 Check out Out Review [WITH SPOILERS] of Legends of Tomorrow Season 1 Episode 16: “Legendary.”

All season on DC’s Legends of Tomorrow, the series has teased the death of Vandal Savage. One knows that Savage was an effective villain because one really, really wants to see the immortal heel get his swarthy face bashed in. But week after week, Savage’s death was dangled in front of viewers, only to have him escape somehow. It grew frustrating at times, and quite frankly, also made Hawkman and Hawkgirl seem utterly incompetent.  Well, this week in the season finale, Savage gets his – not once, but three times in a very satisfying conclusion to the season.

The episode begins with Rip Hunter dropping the Legends back in 2016. It became very clear just how much the team now means to each hero as none of the members of Hunter’s squad could acclimate to the present. Sara has to deal with the death of her sister Laurel, Mick has to deal with life without Len, Martin has to deal with a return to a mundane life of non-adventure, and quite frankly, none of the Legends were ready to give up while Savage still lived, not with Kendra and Carter his time-lost prisoners.

Well, after weeks of failure, the three Legends teams in three eras kick Savage’s immortal ass. Kendra and Carter kill him in the future, while Heat Wave kills him in the 50s and a still mourning Sara kills him in the 70s. We’ve been waiting for this moment all season, and the series delivers three cathartic villain deaths. Rip Hunter is willing to sacrifice himself to prevent the meteor from detonating by flying it into the sun, but even he has a happy ending as he has the juice for one last time jump to safety and our team stands together and victorious. is a load of fun. The episode is plotted like a great Silver Age issue of Justice League of America, what with the Legends separating into three sub-teams and going on side missions and then coming together at the end. Each Legend is given time to shine and it is clear just how important the team has become to each member. Even Mick gets teary eyed over the prospect of Rip’s death.

We get a conclusion of each Legend trying to return to a normal life, but they can’t. Sara is too broken by Laurel’s death, Mick misses his fallen partner Len Snart, and Martina and Jax miss the rush of being Firestorm (by the way, Firestorm develops his transmutation powers this week- AWESOME!). The reluctant team can’t face life without each other and reunite to become the new guardians of the time stream. As the team stands gathered, I can’t help but smile. Sometimes the series went off the rails, indulging in overly dramatic, illogical plotlines rather than remaining focused, but in the end, the season concluded on the right note. Not every character was executed well, and it seemed like the show runners knew this.

The Hawks make their exit to find their own destinies and the Legends are down two members. In truth, the series never captured the essence of either classic DC character, so this breakup could be fortuitous. The brain trust behind DC TV might have to have a few story meetings to find the hook to make these characters special, because they were very flat in Legends.

But everything else works, with each member becoming much deeper characters than they were before they boarded Rip Hunter’s ship. Appropriately, the future is bright for the Legends of Tomorrow as they now have clarity of purpose and a really engaging group dynamic. Snart may be gone, the Hawks may be elsewhere, but “team time” stands united, ready for next season.

And next season should be a winner because, my dear friends and DC Comics faithful, the Golden Age Hourman shows up in the episode’s last moment and says the three words I have waited all my life to hear in a live-action setting. He says “Justice,” “Society,” and “America.”

We’ll see you next year!