Having disposed of the Time Masters, the Legends of Tomorrow must now step into the gap they’ve created and police the time-stream.

The first season of Legends of Tomorrow was uneven at best. It seemed like every time they got their footing, the show would take a step backwards. This new trailer gives me hope that they’ve learned from their miscues and will focus on superhero action as much as period details.

A version of the Legion of Doom consisting of Damien Dahrk, Reverse Flash, Captain Cold and Malcolm Merlyn has already been confirmed for this season. If we learned nothing else from The Super Friends, it was that team fights are always more entertaining.

Season Two of Legends of Tomorrow debuts October 13, 2017 on the CW.

Let us know what you think of the new trailer in the comments below. 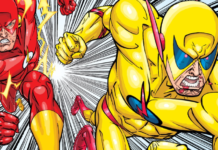 The New Alien Faces of Rogue One

Jeremy Renner Wanted to Die While Filming The Avengers