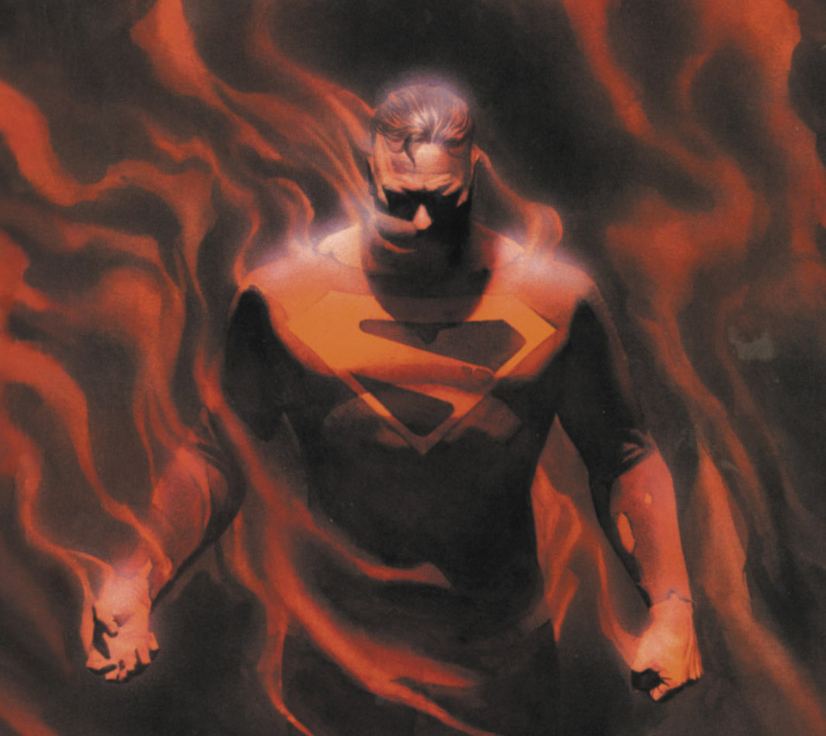 When last we left the Elseworld that is Kingdom Come, war had come to the gulag. The imprisoned villains drew first blood and Wonder Woman answered with swift and violent retribution. Think things can’t worse? Wrong! How wrong? We’ll tell you in our Kingdom Come Retro Review focusing on the final chapter, “Kingdom Come: Never-Ending Battle.”

Once again, we are reviewing a 20-year-old series, but be forewarned: SPOILERS FOLLOW!

The first clear image we see in the fourth issue of Kingdom Come is Superman locked in combat with Shazam. There are a lot of other characters fighting on the splash page, but your eye is immediately draw to the Man of Steel and the Big Red Cheese.

This is important because the entire battle between the super-powered factions boils down to the humanity of these two characters.

Because while the forces of good and evil are destroying Kansas (again) the United Nations makes a fateful decision. They decide to end the threat once and for all with a trio of meta-proof nuclear warheads delivered via Blackhawk.

While all of these wheels are turning, Wonder Woman kills one of the leaders of the villain rebellion, Von Bach. This leads to a confrontation with Batman and an exchange regarding honor and atonement.

Batman and Wonder Woman put their differences aside in time to stop two of the nukes. The third is dropped and Superman is unable to stop it with his heat vision. He begs Shazam to let him go to stop the bomb.

“More than anyone who ever existed, you know what it’s like to live in both worlds. Only you can weight their worth equally.”

Shazam responds by calling down his lightning and taking the nuke into the atmosphere himself.

The World’s Mightiest Mortal sacrifices himself to save them all. Well, many of them.

Superman flies to the UN to bring the building down on the men who ordered the attack. This is where our narrator, Norman McCay, finally makes his stand. He reminds Superman of his humanity and stops the destruction. Superman tells them all that they must learn to live as one. In response, the heroes unmask and Shazam’s cape is flown up the flagpole at the UN as a reminder of his sacrifice.

I had truly forgotten how powerful the final chapter of this story was.

Issue three primed us for an epic slugfest. What we get is a fight for the soul of humanity.

Once the damage is done and the rebuilding begins, we see characters from all sides of the conflict putting their differences aside to rebuild the world into a better place.

Isn’t that ultimately what we want from our heroes?

Kingdom Come remains striking and important even 20 years after its original publication. The themes are timeless and the characters are as vital as they’ve ever been.

If you’ve never read the series, do yourself a favor and pick up a copy of the trade paperback wherever you get your comics. The trade includes character pages that expand on the creators’ visions for the characters. There are also pages that outline who all those characters on the individual issue covers are, just in case you were wondering.

I guess I’d be remiss if I didn’t mention the surprise awaiting readers in the “One Year Later” pages at the end of the story. I won’t spoil the surprise for you if you haven’t read the story, but suffice it to say the future looks super-wonderful.

Thanks for reading these reviews for the past few months. I’ve enjoyed my time back in the world of Kingdom Come. I hope you have too.

Check out our retro review of Kingdom Come Part One: Strange Visitor by clicking the preceding, incredibly obvious, light blue text usually indicative of a link.

Check out our retro review of Kingdom Come Part Three: Up in the Sky by clicking the preceding, incredibly obvious, light blue text usually indicative of a link.