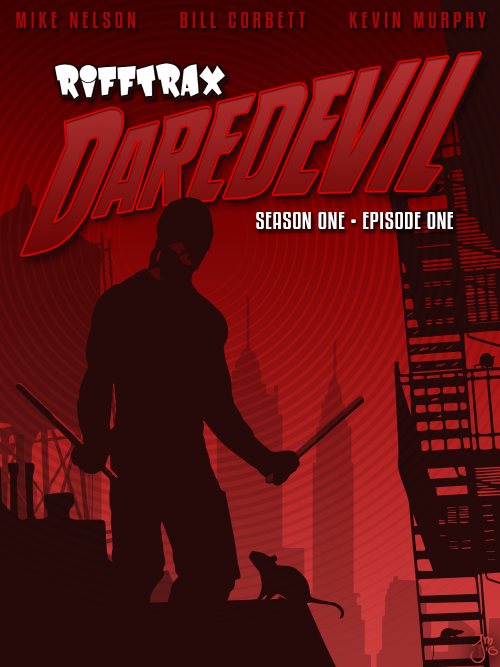 Do you think the Netflix series Daredevil could use a few laughs? Then look no further! Rifftrax’s latest TV riff is of the show’s first episode. Michael J Nelson, Kevin Murphy and Bill Corbett show no fear as they take a stab at Marvel’s resident lawyer/vigilante (Charlie Cox).

Making fun of TV shows is new territory for Rifftrax with this being their third attempt at it. The other two are the premiere episodes of The Walking Dead and Game Of Thrones. For those not familiar with Rifftrax, they are MP3s you can listen to while watching a movie. Picture a funny director’s commentary track.

I’d definitely say Nelson, Corbett and Murphy aren’t out of their element when mocking Marvel’s first Netflix series. While the jokes aren’t as rapid-fire as their movie riffs, they still manage to keep you entertained. While the show itself is well received, the MP3 track definitely proves even good TV shows are riff-able. Ever notice how rainy and wet Hell’s Kitchen is? Or how dumb some of Karen Page’s questions are? How about how pointlessly dark the lighting is for the settings in the show? Well, after listening to this along with the episode, you’ll never unsee those again.

I wouldn’t say it’s as good as their MP3 of the 2003 Ben Affleck Daredevil film (a film I like as well as the director’s cut btw), but it’s still funny. Although Murphy, Corbett and Nelson can only work with what happens in the show, they still manage to find some gold. I would definitely recommend getting this.