Matt Murdock might be forced to kill in Daredevil season 2?? That’s a pretty loaded, ominous statement, and one that most well-informed, canon-entrenched Daredevil fans will immediately dismiss with an emphatic, “NO F***ING WAY!” But, in a world where Daredevil punishes himself – and plenty of criminals – with little to no positive return, Matt’s logical, lawyerly mind (already prone to dutiful conflict) will absolutely question the effectiveness of his methodology. Stick with me, folks.

The Punisher called him, “a half-measure.” And in the very same breath he labeled Daredevil “a coward.” Why? Because Daredevil beats the bubbling poop-sauce out of especially violent offenders, but never truly stops them. Sure, they might not be able to walk upright for several months, but as soon as they recover they’re back on the streets and, because of said beating, returning with a magnified vindictiveness. So, if beating doesn’t work, how about just handing them off to the police? Oh, wait…DD’s a vigilante, and is actually breaking the law by putting criminals in sleeper holds and handing them off to the police. Ugh.

Let’s examine the Punisher’s perspective for a moment. The Punisher – Frank Castle – is a highly trained, highly effective, military veteran. When trained for war, for combat against any number of insurgents or enemy combatants, one is trained to not only deter and restrain said insurgents/combatants, but to permanently dissociate an enemy’s soul from his trigger-pulling body. To truly win the war, to effectively secure and maintain the village, the enemy must be reduced to a state of non-recurring, inoperable resistance. Right; their bodies need to be shot to hell so they can’t shoot back. 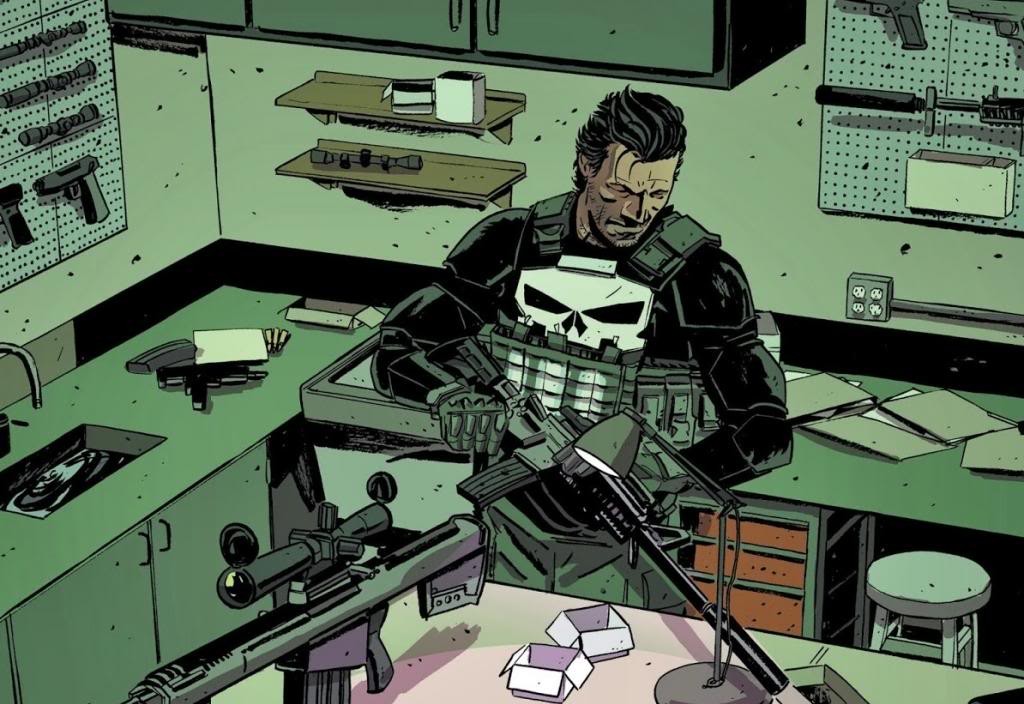 Are soldiers given clubs, dropped into a hot conflict zone and expected to beat the enemy senseless in the hopes that, after regaining consciousness, said enemy will “learn the error of their ways” and refrain from any sort of retaliation? No, they are not. When the enemy is targeted and the mission mandate made clear, military personal are granted armaments that will stop, for all time, a conflicted combatant’s ability to return fire.

This is the Punisher’s method. He’s a surgeon countering disease and excising infection with precise cutting implements rocketing from the barrel of a custom assault rifle. His enemies are, after the Punisher’s efficient engagement, rendered totally inoperable (in every sense of the word). It’s somewhat bloody, morally reprehensible and a flagrant disassociation from the sanctity of life….but militarily speaking, it’s historically successful.

Daredevil puts himself up as a human shield against the meek, beating back invaders from the sagging, buckling walls of his village, but the vanguard never relents, and the numbers never dwindle. Why is this? Because every single perpetrator he elbows in the face gets up again, incentivized by their defeat and accompanied by additional bodies to force a different outcome.

And here’s a terrifying thought: what if one of these enemies “temporarily” removed from the theater of conflict returns, but inflicts their retribution on someone other than Daredevil; someone utterly defenseless with close emotional ties to Hell’s Kitchen’s horn-headed, conflicted protector? What if, while on that wall and immersed in its exhausting, cyclic defense, Daredevil can’t shield the one person who matters more than his entire village? And if that person dies, isn’t Matt partially responsible, having had the opportunity to permanently inhibit this recurring assailant in the first place? Take a look at what happens when you allow your enemies to recover, regroup, consider new strategies and strike again.

Yep; this is what happens when you allow Bullseye to get back up, brush himself off, and live to fight another day.

The Punisher is an unrelenting force pressing against that wall. His surgery is sensible, and ostensibly effective, but now he’s reckless and endangering the denizens of Matt’s village. Matt has tried to stop him by softer means – fisticuffs – but it’s not enough; the Punisher gets up, continues where he left off, and adds Daredevil to his mental hit list due to constant interference. What can you do against a foe whose murderous intentions – and expressions – will never abate no matter how many times you apply ancient, temporarily debilitating kung-fu techniques to his solar plexus?? And what will you do if this obsessive, deluded, uncompromising force aims and rockets itself at the people you care about the most?

There may be a moment, a stress-induced epiphany, where Daredevil realizes he could lose everything; a moment where Matt forgoes his heart’s concerns, his moral assertions (the “cowardice” Castle spoke of), and logically concludes that in this instance, to truly protect those he cares about and to guarantee the absolute removal of a clear, present, and consistently lethal danger…he may have to kill in order to stem the killing. Regardless of the Punisher’s emotional ailments, his tactics were arguably correct; to truly win the war, to effectively secure and maintain the village, the enemy must be reduced to a state of non-recurring, inoperable resistance.

Do you think Daredevil might be forced to kill in order to save his village AND the people he loves?? Let me know your thoughts below!