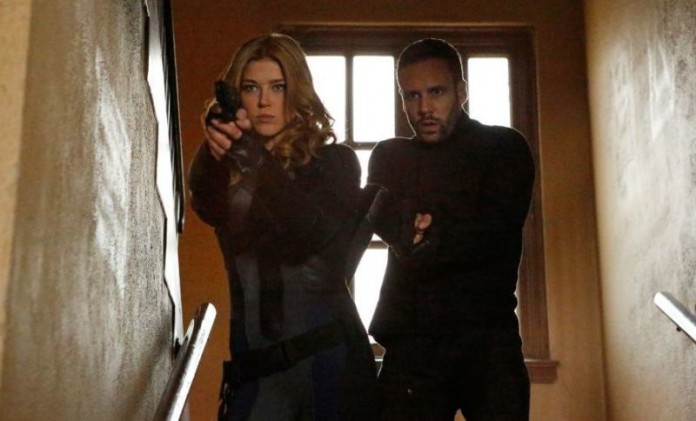 It was Bon Voyage to two members of the task force on Agents of S.H.I.E.L.D.

“Parting Shot” was a proper sendoff for Bobbi “Mockingbird” Morse and Lance “Still Needs A Damn Code Name” Hunter (although I get the sinking suspicion we’re going to see them again real soon). When a mission in Russia goes wrong in every possible way, it was Morse and Hunter trapped in the political crossfire… leading to their disavowment with S.H.I.E.L.D.

It was only a matter of time before Adrianne Palicki and Nick Blood were written off the show. The two have already been announced for their own spinoff, Marvel’s Most Wanted, and last night was our look into how the two spies we’re booted from their S.H.I.E.L.D. positions.

Who’d have thought their expulsion from the covert S.H.I.E.L.D. would happen because they saved the Russian Prime Minster from an Inhuman powered Russian General? However, when Morse saves the day by putting two bullets in the General… her fate was sealed. If you thought Hunter would let her take the fall alone, think again. The two were ready to face a Russian firing squad together, but thanks to S.H.I.E.L.D. Director Phil Coulson and President Ellis (William Sadler is getting comfortable in the MCU Oval Office)… they were able to walk out free… as long as deny their spy affiliations… which they did.

Since joining the show last season Palicki and Blood have become two of the best reasons to watch Agents of S.H.I.E.L.D. The chemistry the two had with each other will be an asset to Most Wanted, but will leave a large vacancy in S.H.I.E.L.D. At least the show gave them a fitting exit as the main cast offered a “spy sendoff” by all raising their drink incognito from each other. It was a rather emotional scene for the show, but fitting for two cast members that were integral to the positive upswing the show has taken over the last two seasons.

The new show formula for Agents of S.H.I.E.L.D. seems to be simple; introduce a new Inhuman power every week. We’ve seen Colombian speedsters, Medusa men, and this week… A Russian General who can turn his shadow into a killing machine. It was an awesome power made ever better by the fact that we learned the power wasn’t a shadow, but sentient Darkforce! Not familiar with Darkforce… well you should be, it was a crucial element in Season 2 of Agent Carter.

Marvel is making a point by introducing Darkforce in its television world. Making MCU fans aware of its existence before it will reportedly be part of the forthcoming Doctor Strange movie. Besides being a consuming substance that turns its host crazy, we haven’t been given too much about what its true power is (it explodes, it vaporizes people, and it might be sentient). This probably isn’t the last time we’ve seen Darkforce in S.H.I.E.L.D., but maybe we can get a better idea of how the Darkforce works before we see Benedict Cumberbatch take over as the Supreme Sorcerer.

With an episode dedicated to Morse and Hunter, there was little left for anything else. We barely saw HYDRA or Gideon Malick. However, there was the closing sequence… where we were introduced to Malick’s daughter, Stephanie. She not only seemed aware of her father’s affiliations with HYDRA, but she also seemed to have distaste for S.H.I.E.L.D. More importantly, she wanted to meet her father’s “mystery man”.

Sure, they were probably talking about HIVE. Malick even mentioned how the mystery man was getting himself in order (by which he means sucking the human juice out of people), but why not mention HIVE by name, since we were already introduced to the alien lurking inside the agent-formally-known-as Grant Ward. By speaking ominously about HYDRA’s mystery man, it makes me wonder if Gideon and Stephanie were talking about a different villain we’ve yet to meet. Maybe Baron Zemo? Red Skull? The Abomination? Anything is possible and nothing can be ruled out… even though it’ll probably end up just being HIVE inside his Ward meat suit. 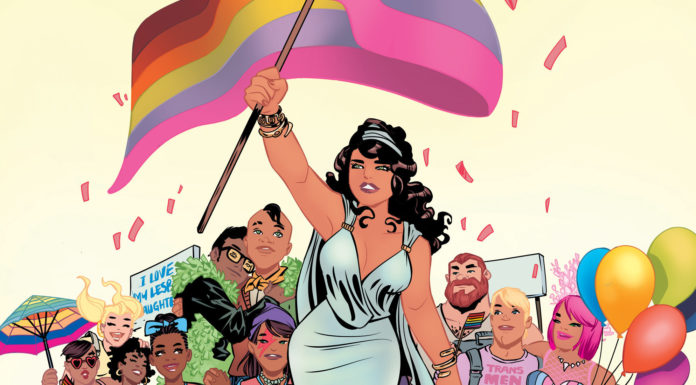