Home TV Reviews Supergirl Episode 5 Season 1 Review: “Why Does She Do It?” 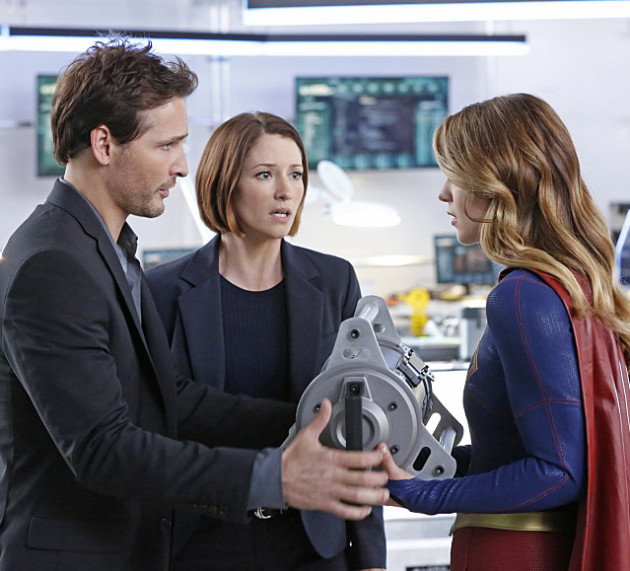 Check out Our Review [WITH SPOILERS] of Supergirl Episode 5 Season 1: “Why Does She Do It?”

Supergirl Episode 5 was supposed to be shown last week but due to the installment’s subject matter and the tragedy in Paris, it was held back. The episode in question saw a disgruntled employee of Maxwell Lord planting bombs around National City, bombs Supergirl had to find and stop all while babysitting Cat Grant’s gifted, Supergirl-crushing child.

The babysitting subplot truly made the episode as the bomb plot was pretty paint by numbers. The villain, Knox, was rather flat and very uninteresting. It was the typical, ‘you fired me, my daughter’s sick, and now I blow you and your hi-tech, Hyperloop-inspired train to pieces’ deal. The episode did go a long way into establishing Maxwell Lord and transforming the futurist into the character DC comic fans are more familiar with, but unlike some of the villains faced in other episodes, this week’s threat just felt tacked on.

We started out with a drone following Kara around the city and moved onto the first bombing. No one was hurt thanks to Supergirl’s timely intervention and it was fun seeing Kara using her powers with more confidence. Anyhow, Kara quickly realized that someone was targeting Maxwell Lord and with the DEO’s help, she figured out who it was, a weasel like employee named Knox. Lord fired Knox, blah blah, you’ve seen it before and now Knox wanted to blow up the super train.

I have to admit the super train set was pretty cool as the production values on Supergirl continued to impress. It was all playing out as one would expect when Cat Grant’s son wandered off in hopes of finding his celebrity crush, Supergirl. This is where things stepped up because Cat Grant continued to be the glue that holds this series together. This week, we got a look into Grant’s family life, her relationship with her brilliant son and her struggles with her tyrannical mother. The chemistry between Kara and Cat is brilliant and every scene they are in together just pops right off the screen. I loved how Cat was portrayed as her nerdy son’s biggest supporter, not a thing like her own mother who was never satisfied. There is a heroic depth to Cat and I can’t wait to see how it plays out.

There is no heroic depth to Maxwell Lord though, who is still a far cry from the villain that drove the conflict in many mid 2000s DC comics, but he’s getting there. He was still too much of a malignant Tony Stark rather than being his own thing. But this episode stepped up his villainy so hopefully we’ll see the depths of Lord’s depravity soon. It turned out that Lord used Knox as his puppet so he could study Supergirl. What he wanted with the data is unknown but it seemed like Kara had a hidden enemy in National City.

And she might have two as Hank Henshaw slowly continued to reveal that he is not quite human. Henshaw disarmed one of the bombs using his strange red eyes and super strength. Henshaw’s penchant for machinery should terrify long time DC fans and for you newbies; I’ll just let that little tease linger. Don’t Google it now; the surprise will be every cool. Anyway, there was a great scene where Kara was waking up in the DEO HQ after she was knocked loopy by a bomb and Henshaw was looming over her, eyes glowing and filled with menace. It looked like they were going the Harrison Wells route with Henshaw but hey, if it ain’t broke.

Speaking of broken, we have the relationship between James Olsen and Lucy Lane. Last week, we saw that Lucy and James would get back together, and this week, we got to see how it happened. We learned that Lucy ended the relationship because of James’ devotion to Superman; James thought that he lost his lady love because she had chosen her career over him. It was all complicated and not really all that interesting. I am happy though that Lucy is portrayed as something other than the dreaded RIVAL. She genuinely admired James because of his devotion to Superman and really took to Kara despite the fact that Kara obviously had feelings towards James. Of course, when you add the ever present and pining Winn to the situation, you have a morass of the feels. While it all got overwhelming at times, there are little character wrinkles added that kept the narrative from drowning in its own emotional complexity. But this is a delicate balance that the series will have to keep finessing or else risk collapsing under its own melodrama.

One thing about Olsen that I will say is this: Supergirl Is telling the Jimmy Olsen story no one in comic history got to tell. This is the next chapter of Olsen’s life when he becomes a mature adult, something he never got to do in the comic and it’s a story this long time Superman fan is having fun watching unfold. I miss the bowtie, though.

While not bad by any means, this was the weakest installment of Supergirl so far with a threat that was more annoying than it was dire. While watching the bond between Cat and Kara grow is a true pleasure, some of the other romantic drama left me feeling cold. It was a nice moment when James realized he truly loved Lucy when her life was threatened by the mad bomber, but it was nearly lost to the endless pining that permeated the episode.

Check out the Daredevil Order and Chaos Men’s T-Shirt!