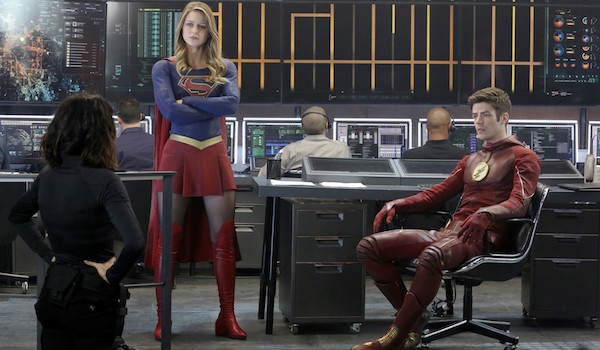 Check out Our Review [WITH SPOILERS] of Supergirl Episode 18: “World’s Finest.”

Comic book fans have long looked at this week as the arrival of the greatest DC Comics live-action team-up ever. They envisioned a meet-up of two of DC’s greatest legends. They anticipated dual thrills as two of DC’s finest met in a legendary tale of heroism. Well, DC fans got their wish. However, it wasn’t in Batman V Superman: Dawn of Justice where they got this unforgettable superhero team-up event; it was in this week’s episode of Supergirl as the Girl of Steel ‘ran into’ The Flash!

And listen, no one threatened each other, no one tried to kill each other; there were no inflated dream sequences, and no one, NO ONE, peed in a jar. Instead of all that, two heroes met, shared a few laughs, fought some evil, hugged, and went onto their next adventure.

Supergirl: “World’s Finest” was the anti-Superman V Batman. It did not undermine 75 years of DC history nor did it indulge in the darkest and basest aspect of its heroes. No, what this week’s episode of Supergirl did was celebrate everything right and good about DC Comics.

Now don’t get me wrong; I didn’t hate DC’s latest cinematic release, but I think DC can do better. They can reposition their characters to not reveal the ugliest parts of themselves. And if the DC films division needs a ‘how-to’ guide to get it done, it just needs to look at the DC TV division, because man do Berlanti and company just get it.

So why was “World’s Finest” so darn good? Let’s break it down:

Last week we were left with mean girl Siobhan manifesting super-powers. It seems she had the power to emit high frequency sound waves from her usually caustic mouth. This week, we got an explanation for those powers after Siobhan was examined by the DEO. Siobhan is not an alien, nor is she a scientifically gifted metahuman. No, Siobhan is a magical being, the first in Supergirl. Now, Supergirl fans know that one of her vulnerabilities is magic and Siobhan takes full advantage of that this week and blasts poor Kara out of Kat Co. Kara’s secret identity was safe though because the Flash ran over from the CW to lend a hand. Hell man, Cat even made a CW joke that had me in stitches (ask my wife, I had to pause the DVR I was guffawing so hard). Hear that Zack Snyder? Laughter, during a superhero story. It really can happen!

Anyway, Siobhan learns that she is from a cursed family. She also learns that the curse manifests when a member of her clan is wronged. Well, Kara wronged Siobhan (or so the mean girl thinks), so to release the curse, Siobhan must kill Kara. The only problem is that Supergirl keeps getting in the way (because duh) so Siobhan must turn to fellow villainess Live Wire for help. So now we even have a super-villain team-up and at no point does anyone try to kill anyone else with a spear. Are you listening, Snyder??

So Kara must deal with the baddies, but she has the Flash by her side; and let me just say holy poop(!), does Grant Gustin and Melissa Benoist have chemistry! Every second they are on screen is a sheer delight as the two just nerd-out on each other. And then they try to kill each other. No they don’t, because this TV show has the heart of 75 years of DC history beating underneath it. A huge, loving, laughing, soaring heart. Ahemmm.

My only complaint about this episode is that the pacing is kind of weird. I think the origin of Silver Banshee should have been dealt with in another episode. It is kind of distracting especially since I wanted as much Flash/Supergirl action as possible. But, once the origin was out of the way, we were off. It was a good origin and it was dealt with nicely as magic was introduced into the show, but it would have been better served if it was dealt with elsewhere.

All that said, Silver Banshee (as Siobhan dubbed herself) looked awesome and she made a great addition to Kara’s rogues gallery. Live Wire is still cool as heck and the pair made a formidable twosome. Kara and Barry had to find a way to work in unison to defeat the two dastardly dolls while also finding a way for Barry to return to the CW.

Of course, Kara and Barry’s buddy-buddy act made James Olsen very jealous, but because of some advice from Barry, Kara and James finally hooked up. It was a nice moment and the culmination of an entire season. Hey, that Olsen kid is a good character. Imagine if he was introduced into a narrative and then shot between the eyes five minutes later. Wouldn’t that be short sighted, petty, and mean? At least one Jimmy (or James) Olsen is alive and well.

It will be fun to see if Barry’s visit to ‘Earth S’ (yeah, I’m calling it that) will be acknowledged on the CW. And for real, I hope DC makes this a yearly event because watching Barry and Kara together brought me such great joy. And we even end with a killer cliffhanger involving Non and his newest nefarious plan. Really, this whole show was paced like an awesome, old-school issue of “DC Comics Presents.” And let’s be frank: I gave DC’s latest film a three star review, and the lightness and heat of “World’s Finest” still fills me with joy.

So enjoy this one, DC fans, because “World’s Finest” is the way a superhero team-up is meant to be.