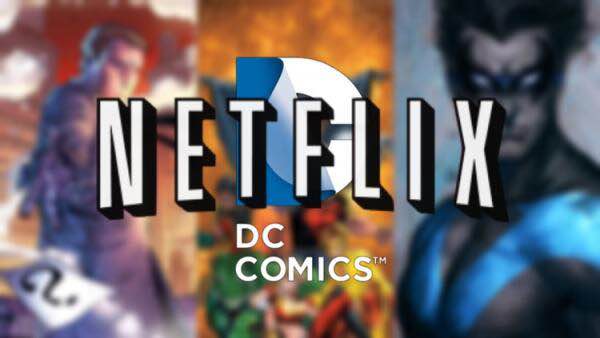 Due to Marvel’s success on Netflix with Daredevil and Jessica Jones, myself and many other fans can’t help but think which DC heroes or teams could have the same kind of success on the popular media-streaming platform. Because of this burning speculation, I’ve compiled a small list of characters that I think would be great fits for Netflix.

One of my personal favorites and an underrated character from DC Comics and the short-lived Justice League: Unlimited cartoon series. Charles Victor Szasz (or Vic Sage) is an investigative journalist in Hub City who wears an artificial skin mask, made from a material known as Pseudoderm, to hide his facial features. He’s also a detective, and is well schooled in martial arts; he’s like a Batman/Sherlock Holmes mixture. The intricate, superbly choreographed fighting scenes on display in Daredevil would certainly work for our speculative The Question Netflix series. The show could also potentially mimic something along the lines of Gotham – ferocious and brutal.

I couldn’t have a list without including Young Justice. The show used to be on Cartoon Network, and was cut down in its prime after 2 seasons. Even though the show has been gone for about 2 years now, there is still so much narrative potential for this young team. Whether it’s converted to live action or stays animated, Young Justice needs to return.

Okay, this is where things could get interesting. We all know that there’s a Titans show currently in development at TNT, but other than the news that it’s being worked on, there’s a deficiency of solid information regarding the upcoming series. What I propose is this: Make Teen Titans for Netflix and put it in the DC Extended Universe. Now before you roll your eyes, hear me out. We know that Bruce Wayne has been acting as Batman inside this movie universe Snyder has created for 20+ years. He has a dead Robin, a possibly deceased Jim Gordon, and history with Joker, Deadshot, Harley, etc. What if the Teen Titans show was a prequel, and took place a few year before the death of Robin (Jason Todd)? It could establish Dick Grayson quitting as Batman’s sidekick, forming the Titans, showing us what the entire group went through as teenagers fighting these crazy battles, and then ultimately, the team splitting up down the road. Perhaps something tragic could happen to a member of the team that would cause them break up. If Warner Brothers followed this route, the rumored Teen Titans movie in the DCEU wouldn’t be the first time we’re introduced to them.

I don’t know how a Nightwing series would work, but what I do know is that we all want one. No need for Batman to show up for a while. The series could show Nightwing trying to become his own hero after quitting the Robin role. The series could also have him team up with other characters from the DC universe like Arsenal, Zatanna, Batgirl/Oracle and more. Give him villains like The Riddler and Deathstroke and you’ve got yourself a very entertaining show. Also, if you wanted this series to be in the DCEU, it would be a great to tie into the Teen Titans show I mentioned earlier.

Right now, Zack Snyder is in talks with HBO to make Watchmen into a series for the station, but I have a slightly better idea: The Watchmen for Netflix could be a one-off, a small season comprised of 13 episodes which would be a re-telling of the comic book printed in 1986. Zack Snyder directed a Watchmen film back in 2009, but fans weren’t too happy about the lack of character development, and bemoaned the film’s sparsity of narrative when compared to the comic book series’ densely packed story. Besides that, the show could be a super-dark and beautifully shot series. The potential is all there.

I’ll admit that this one probably wouldn’t work, but just the thought of Red Hood in his own show gives me goosebumps. If you thought DC was too dark already, just you wait. Could you imagine seeing a freshly resurrected Jason Todd all confused as to what just happened to him? The show could be more of a drama then anything in the first season or so. Seeing him wrestle with his inner demons would make for some great television. Of course he’ll be killing and whatnot, but what I’d be interested in the most is how he deals with the fact that Batman, a person he considers his father, wasn’t able to save him, and the fact that he didn’t kill the man that killed him (Joker).

So there you have it: 6 DC characters/teams that could work on Netflix. I know for a fact there are some out there who would be better fits than the ones listed. If you know some, let us know below!