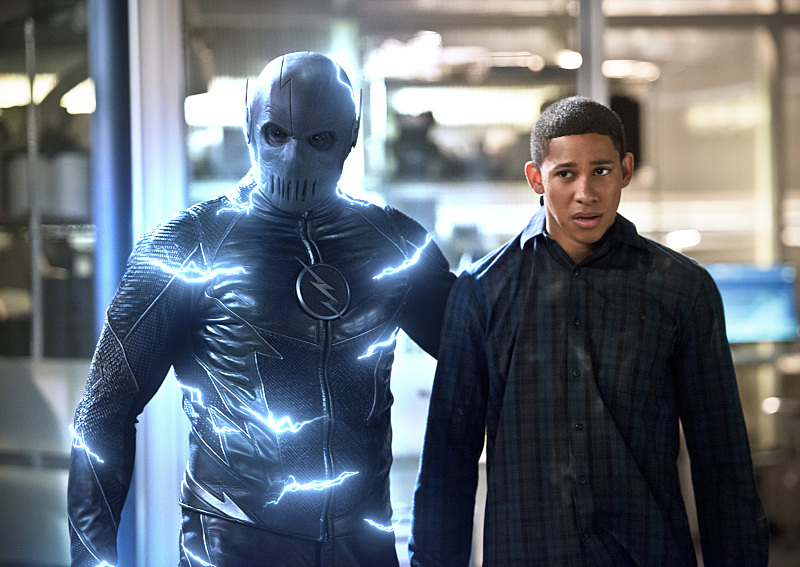 Check out Our Review [WITH SPOILERS] of The Flash Season 2 Episode 18: “Versus Zoom.”

Because that’s Zoom’s name: Hunter Zolomon. We met the Earth-1 Zolomon a few months back, but this week, we are introduced to the Earth-2 Zolomon. This Zolomon is a twisted reflection of Barry Allen. You see, when Zolomon’s father returns from war, he murders his wife in front of a young Hunter. Hunter is then placed in an orphanage where he starts down a road of madness and murder.

Now, Zolomon is dying and he needs Flash’s speed. Problem is, Zoom is trapped on Earth-2. Unfortunately, Barry and Team Flash open a gate to Earth-2 and bring Zoom over to Earth-1. The whole first half of the episode deals with Cisco’s wrestling with whether to use his powers to open the portal or not. Cisco doesn’t want to become like his evil Earth-2 counterpart, Reverb. Finally, Barry convinces Cisco he is not going down a Vader path and Cisco “vibes” the portal. Zolomon comes through and Barry defeats him using the new tech cobbled together by Team Flash. The first part of the episode is very good with heartfelt moments between Barry and Cicso, Iris and Caitlin, and Joe and Wally. The Caitlin stuff in particular works because remember now, Caitlin was in love with Jay Garrick and Jay now stands revealed as Zoom. But once Zoom comes through, gaps of logic take over.

Zoom manages to escape Barry’s trap and kidnaps Wally. Team Flash contact Zoom and tell him that Barry will give up his speed in exchange for Wally. Zoom agrees and brings Wally back. Cisco takes off with Wally and Barry allows himself to be drained of speed. Now, unless Barry is playing the long game, how can he agree to undergo this exchange? He’s giving a known serial killer godlike powers and Wally is safe! It’s not like Zoom left Wally behind or anything- the kid is safe, but Barry still gives up his powers? I appreciate honestly and everything, but come on. Let’s just say that this episode is saved by a reveal that Barry and company are playing Zoom, because right now, the heroes just look like clueless patsies.

There is a lot to love about this week’s episode, especially in regards to Wally who is turning out to be a rich and likable character that will hopefully be a major, and super-powered, part of next season. The character relationships are as strong as ever and the origin of Zoom is powerful. I kind of wish the story didn’t taint the legacy of Jay Garrick, but that’s just the old-school comic fan in me talking. There’s still Zoom’s prisoner, the man in the mask; perhaps another Earth’s Jay is hidden beneath that ominous headpiece.

I just wish the characters made justifiable choices, because the last twenty minutes of the episode are filled with a whole lot of, “What the heck is he doing??” moments.

First Look at the Assembled Justice Society from Legends of Tomorrow Season 2!