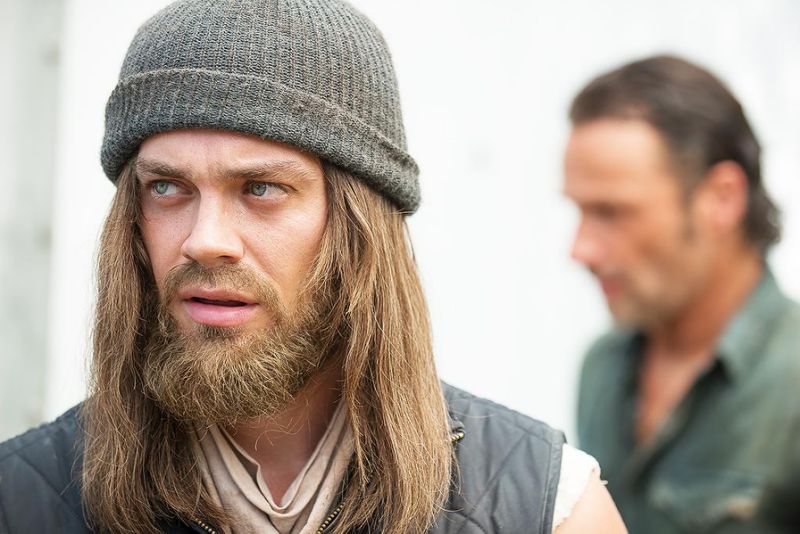 Oh Abraham…can your love triangle float an entire episode of The Walking Dead? I don’t think so but judging how the last two episodes have gone on the The Walking Dead they won’t go that direction. I’m not quite sure how I feel about this whole Abraham-Rosita-Sasha dynamic. Does Abraham have an actual thing for Sasha or what game is he playing? It seems a little forced but we’ll see. At least we get to see some more of our new friend from last week’s episode as he explains that there are not only his own community, but many others. I think there’s some foreshadowing there with Jesus’ report of what Rick and Company have to expect…’Your world is about to get a lot bigger’. Good or bad? I think we should probably be leaning towards bad during this episode, Knots Untie!

‘If he’s telling the truth, this could be the start of everything’. Again, the foreshadowing continues. They do have the groundwork currently forming around a certain big bad guy and part of Jesus showing up, I feel, is really attempting to establish on whether or not Rick and Company are able to deal with the soon to arrive bad guy. Also, I guess Rickonne is a recently addition to the camp of Alexandria but it doesn’t look like anybody is all that surprised. Either that or that sort of thing doesn’t garner a lot of attention during the zombie apocalypse. On a side note, aren’t the in Georgia? Why is everybody rocking a winter coat all of a sudden. Just a random observation. I also enjoyed how Abraham had some fun with euphemisms. I suppose even when people start eating each other and the dead rise we are still going to be dropping phrases like ‘if when you were pouring the bisquick if you were planning on making pancakes’. He probably just have said ‘hunka-chunka’.

At least Glenn found a doctor! You could really see how hopeful Glenn and Maggie are at finding not only a doctor, but what knows how to deliver a baby! Awwww! The real question is, why isn’t that doctor checking out Jesus’ friend? That guy wasn’t looking too healthy and started to have that zombie pallor but hey, at least you got some vitamins! That’s all just fun and games till our intreprid group of survivors finally run into Hilltop Community, which is the location Jesus hails from. What can we glean from this first appearance? Well, they are out of bullets…but they have spears! Oh…and a blacksmith? Did anybody else get the impression about one of those ‘Old Timey Western Towns’? Yeah, me too. We also get to meet Gregory who immediately transmits a creepy vibe with his obsession about cleanliness and then more creepiness with hitting on Maggie. Back to Gregory…I’m not a fan of the unscrupulous business man archetype. How the hell did he manage to survive in the zombie apocalypse? I mean, I know it is survival of the fittest but come on….stop proving that maybe the zombie apocalypse was a good idea. Oh, and we also get some more Abraham pining for a family and attempts to stoke the conversation with Daryl Dixon who doesn’t look like he even entertains the thought.

We then get yet another reminder of the oncoming big bad-Negan sends back one of the Hilltop who kills Gregory. Oh, I guess I didn’t realize that the Lannisters sends their regards! This Negan fella must be scary as all hell if he’s able to convince one of the members of Hilltop to stab the leader Gregory right in front of everybody. I didn’t like that guy either but he could have made it at least 15 more minutes…we could have hated him a bit more! Joking aside, Rick and Company then take things into their own hands and dispatch the ersatz assassins with the typical vibrato of crazy Rick. I rather enjoyed a blood drenched Rick getting up and being like, ‘What?’ There was such a distinctive look of ‘Oh man, you guys are a bunch of pansies’. Gregory probably should have seen if Rick and Co were willing to trade some of that ‘badass’ they had laying around. I’m sure that’s one resource there is plenty of on The Walking Dead during this back-end of Season 6.

Gregory survived? I suppose I got my wish! We then got foreshadowing followed by the extra foreshadowing followed by Maggie foreshadowing. I wonder how Glenn feels all about that? We also get a Savior introduction and Rick and Company totally volunteering to take on a warlord. ‘Oh, you want us to work on the farm? Eh….is there something else we can do?’ Oh yeah! You can go kill Negan! Do Rick and Company even know what they are signing up for? ‘You have food, we are willing to work for it'(implied, we are good at murder. That’s how we work. Murder). Hooray for Maggie clamping down too. I wanted her to dominate that jerk and she did. Yeah! We then get to watch our motley band of survivors roll off to go pick a fight, William Wallace style. They do have that really nice sonogram picture to whip them into a right proper berzerker frenzy…and the episode ends with Abraham yearning for a family, similar to how this episode started. I am really enjoying this trail end of The Walking Dead and even the slower episodes keep it moving.