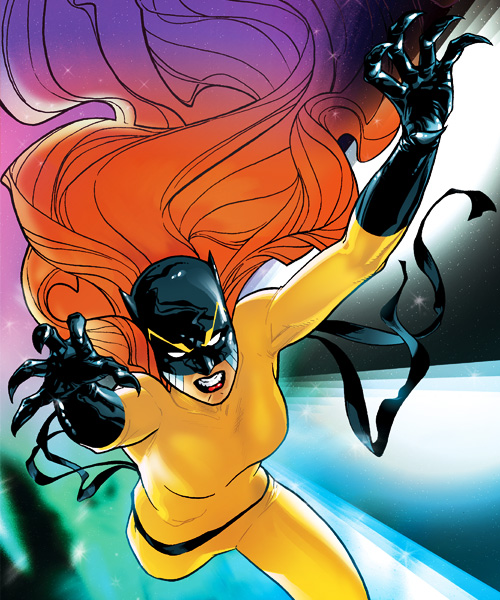 Patricia Walker? Patsy Walker? Trish Walker? It’s all one person, and this seemingly unknown character debuting on Netflix’s Jessica Jones has quite the comic book history. Read on!

As Jessica Jones, Marvel’s next Netflix series, draws ever closer, the buzz is getting louder. If this new series starring Krysten Ritter in the titular role even approaches the excellence of Marvel’s Daredevil than the House of Ideas’ TV division will have another hit on its hands. excitement is reaching a fevered pitch so we decided to take this opportunity to inform and prepare new fans for some of the characters they will be meeting on Marvel’s latest street level series.

Played by Rachel Taylor, Patricia “Trish” Walker will fulfill the role of Jessica Jones’ best friend and confidant. It may surprise newer fans to discover that the comic book version of the character Taylor is playing is a character that predates the Marvel Universe Stan Lee and Jack Kirby created with  Fantastic Four #1 in 1962. In fact, the original Patricia Walker (or Patsy as she has always been known in the pages of many Marvel Comics) has more in common with Betty and Veronica of Archie fame that she does with Spider-Man or Daredevil. Intrigued? Then read on and discover the history of one of Marvel’s unlikeliest heroes and maybe along the way, we can discern just how Walker’s presence will impact the world of Jessica Jones.

Originally created by Canadian born artist Ruth Atkinson, Patricia “Patsy” Walker first appeared in Miss America Magazine #2 (Nov. 1944). Now, this was right in the sweet spot of the Golden Age and Marvel (then known as Timely Comics) had quite the little hit on their hands with Patsy. Patsy Walker went on to star in many comics from the 40s to the 50s and even continued publication after Stan and Jack introduced the Marvel Universe in 1962. Patsy Walker was cut from the same cloth as Archie Andrews, Bettie Cooper and the rest of the gang of Riverdale; she was a young high school girl who had relatable and humorous adventures with her best friend Hedy and her boyfriend Buzz Baxter. In 1965, Patsy and Hedy graduated high school and the Patsy books continued as career girl comedies. Believe it or not, the last Patsy Walker comic (Patsy and Hedy #110) was published in 1967. That’s right, Patsy Walker’s comic almost made it all the way from the Golden Age to the Bronze Age but the strip is very rarely mentioned by modern day historians. Patsy even has the distinction of starring in the first comic (along with a pre-Thor issue of Journey Into Mystery) to carry a Marvel Comics logo!

But what does this all have to do with the Marvel superhero universe and more importantly, the coming of the Jessica Jones Netflix series? Before we answer that burning question we must address another esoteric Marvel comic- Beware the Claws of the Cat. Published in 1972, Beware the Claws of the Cat #1 was part of a Marvel initiative that saw the introduction of a number of new female characters. The book starred Greer Grant, a college sophomore who took up the identity of the Cat. The book only lasted four issues and remains a bit of a trivial treasure of the age. Grant would eventually transform into Tigra the Werewoman as the Cat and her yellow suit, a beautifully simplistic design by the great artist Marie Severin, was, like Patsy Walker, forgotten.

Other than a cameo in Fantastic Four Annual #3, Patsy and her gang were in character limbo. Patsy reappeared in Amazing Adventures #14 (1972). In this issue, Hank McCoy, the X-Man known as the Beast goes against Buzz Baxter-military man extraordinaire. That’s right, the same Buzz that was Patsy’s hunky boyfriend back in the bygone days of Patsy’s stardom. This established Buzz and Patsy as part of the Marvel Universe but it would be a bit before fans got a second taste of the almost forgotten teen icon. Steve Englehart was the writer that brought Patsy back in the Beast’s strip and it was Englehart who found a place for Patsy in one of Marvel biggest titles- The Avengers. Patsy and the now Avenger, Beast, were reunited. Patsy had left Buzz and longed to be a super hero. She palled around with the Avengers for a bit generally making a nuisance of herself. That is, until she found Greer Grant’s old Cat costume and found her destiny. She may have started out as a Betty Cooper-type character, but Patsy Walker, former teen icon, former major star of the pre-hero Marvel, was now Hellcat! Hellcat didn’t stay with the Avengers for long, instead, she journeyed into space with Moondragon to train to be a hero. Patsy wouldn’t be in space long. Soon she would return and join the super team she has long been synonymous with.  There, she would embark on her most legendary and surprisingly darkest adventure.

After her time in space, Hellcat returned to Earth and instead of rejoining the Avengers she decided to join the loosely knit super hero group called the Defenders. And hey, aren’t the Defenders going to be Netflix’s team of street level super heroes and the recipient of their own series? You bet your ass they are! Could it be that TV’s Patricia Walker will also don the whiskers after Jessica Jones to keep the tradition between Hellcat and the Defenders alive? Only time will tell but what we do know is that Patricia Walker’s time as a member of the Defenders was incredibly memorable.

Almost instantly, Walker became a core member of the team forming deep and abiding friendships with Nighthawk and Valkyrie. Her oft-times humorous character was a perfect contrast to the more serious minded Defenders characters like Doctor Strange and the Sub-Mariner. It was on this most peculiar of teams where Patsy Walker became part one of the most unlikely romantic couples in Marvel history.

Now remember, Patsy Walker was once Marvel’s answer to Archie, a kid friendly, good girl who had very amusing but saccharine adventures in the age of Leave It to Beaver and The Brady Bunch. Patsy was once as pure as driven snow – a G rated safe haven of 50 and 60s family humor – so of course she married the son of the devil. That’s right, after joining the Defenders, Patsy fell in love with a married Daimon Hellstrom, the Son of Satan! At this time, Hellstrom was free of his demonic curse and was playing superhero as a Defender. Hellcat and hellspawn become an unlikely couple and were married in a very memorable issue of The Defenders. Being a Marvel wedding, the marriage between Hellstrom and Walker was attacked by a super villain, but this villain was from the bygone era of the original Patsy Walker comics. Buzz Baxter took up the guise of Mad Dog and tried to break up the wedding of his ex. All of sudden, the once simple cartoon archetype of the hunky boyfriend was a slavering, jealous killer seeking to take down his ex gal pal. The Defenders stopped him and the strangest nuptials of them all were finalized. Former teen idol and son of the devil became private investigators and took cases dealing with the supernatural, and I’m sure there are a ton of Marvel fans that would watch the living heck out of a Netflix show starring the son of evil and a costumed former teen star fighting supernatural threats.

The wedding wasn’t the only huge event of Walker’s life that happened in The Defenders. During her time as part of Marvel’s strangest team, it was revealed that all those old stories published about high school Patsy were written by her mother. Indeed, just like in our world; Patsy Walker was a teen comic star in the Marvel Universe. Furthermore, all those stories were based on real life events so those old school Patsy Walker comics are sort of in continuity. How meta! The idea of teen icon will be played out on Netflix as it has been confirmed that TV’s Patricia will also be a former popular teen idol.

Dark days were ahead for Patsy after her time as a Defender. She was used as a pawn by some of her husband’s more demonic enemies and was eventually driven to suicide in the pages of Hellstrom: Prince of Lies. The mid 90s Hellstrom book was a very Vertigo Comics-like take on one of Marvel’s darkest characters and I guess there was no room for a former teen idol in such a title. But Patsy would return thanks to Hawkeye who, in the pages of Thunderbolts, saved her from her damnation. This time Patsy returned a real Hellcat. Since then Patsy Walker has appeared sporadically in her own mini-series, as a sometime Avenger, and as part of a group of heroic women in the pages of the very underrated and unfortunately titled Marvel Divas. Most recently, Hellcat worked as She-Hulk’s assistant and personal PI in the pages of the recent She-Hulk title (a must read by the way). Hellcat will soon star in her very first monthly series so it seems that even after eight decades, Patricia “Patsy” Walker is a character people seem to want to read about, whether she’s going to a malt shop or fighting demons side by side with the Prince of Hell.