Ever wonder what it would be like to become the Batman? To stalk the rooftops? To glide effortlessly across the night sky? What about defeating the criminal underbelly of Gotham? If you haven’t then you need to pick up the collected works of Arkham City and Arkham Aslyum which comes out on October 18th! Oh, you’ve seen those games? Then you should probably watch the above Side-by-Side Batman: Return to Arkham video!

The Side-by-Side Batman: Return to Arkham video displays the upgraded graphics, lighting, and particle effects from the transition. Nothing like watching the ‘shiny newness’ from Playstation 3 to Playstation 4 and Xbox 360 to an Xbox 1, right? The best thing is that the Side-by-Side Batman: Return to Arkham video should give ample reason to go back to the two games that spawned a franchise! Plus Kevin Conroy! That should be more than enough of a reason.

As per the video’s description, “Watch this side-by-side comparison video to see how Batman: Return to Arkham is bringing two of the all-time greatest superhero games out of the shadows as one remastered bundle including all previously released DLC for PlayStation 4 and Xbox One on October 18.” 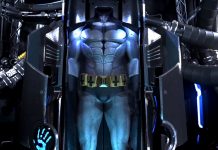 Aquaman Movie May Have Found Its Black Manta: ‘Get Down’ Actor Yahya Abdul-Mateen II