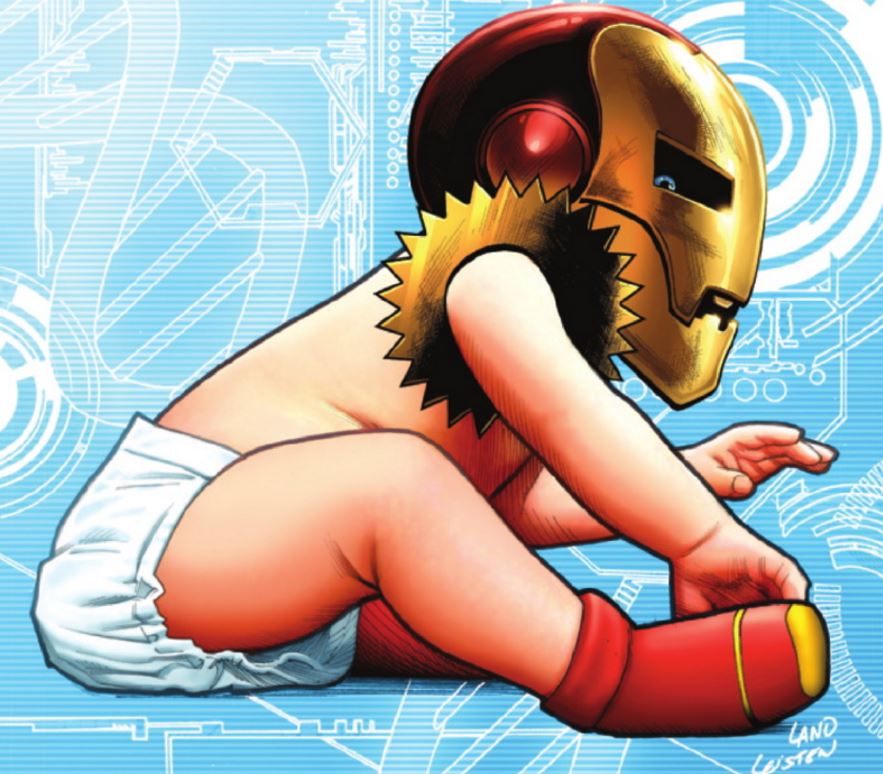 So it turns out Tony Stark’s biological father was a SHIELD agent named Jude. Now, that might sound anticlimactic to some, but in this columnist’s humble opinion, Invincible Iron Man #7 by Brian Michael Bendis and Alex Maleev was the best darn superhero comic I’ve read in a long time. So, like or not, Jude has taken his place in the Marvel mythos. But this raises the following question: who else could have been in contention as Tony Stark’s male DNA supplier? To answer this effectively (and hilariously), we gathered up some unusual suspects in an effort to play Maury and discover who else may have been in contention as Iron Man’s baby daddy. So without further ado, allow us to present our 10 alternate candidates for Tony Stark’s biological father.

When this whole Tony Stark adoption kerfuffle began, smart money was on Victor Von Doom. After all, Doom will soon be taking over the role of Iron Man in the upcoming Marvel monthly Infamous Iron Man comic, and man, such a relationship would add another interesting layer to this already intriguing series. But a look at the math shows that there’s really no way Stark and Doom, who are pretty much the same age, could have been father and son. But wait, doesn’t Doom have a time machine? Couldn’t Doom have paid a booty call to some unsuspecting lady in the past and genetically passed down his penchant for hi-tech metal armor to baby Tony? Only in our very sick dreams.

Yep, we’re considering Kang as Iron Man’s poppa; the Avengers’ greatest foe; the time traveling menace who’s comparable to an evil version of The Doctor. Boy, you could have gotten some story mileage out of this. Imagine, Tony never being able to truly defeat Kang because he doesn’t know if Kang had sired him yet. This would have been the most “timey-wimey” conception in Marvel history, and even though I loved the tale of Jude, I really can’t stop thinking about Kang as Iron-Pop.

Hey, Iron Man, Vader…they’re all owned by Disney, so why not? And that would make Tony Stark Luke Skywalker and Princess Leia’s half-brother, But, yeah…no. No Jedi Avengers for us, because life is cruel. And Vader could have been all “I am your father,” and Stark could have been all “Noooooo!” Picture it! Now un-picture it!

So Howard the Duck arrived in our reality after he was pulled to this dimension by extra-dimensional means. Maybe at some point Howard was sucked back into the past, fell in love with Tony’s biological mom (who was secretly a furry), and quack, quack, quack – a hero is conceived. That would go a long way to explain some of Tony’s more FOUL tendencies. Foul- fowl- hello! No? Okay.

No, wait, we’re talking about Tony Stark’s biological father not MODOK’s. So moving on-

Back in the Tomb of Dracula days, Marvel’s Lord of the Vampires was known for sporting quite the stylish mustache. Tony Stark used to be known for a ‘stache as well! Isn’t that enough to link vampire and futurist as father and son? No? Then how about the fact that over the years, Stark has had an almost hypnotic effect on women? Still not convinced? Well, how about this idea: Tony was sired by Dracula and is now a half-human, half vampire “daywalker” like Blade. Marvel could publish a comic called Tony Stark, Vampire Hunter and he could wear silver armor with launching wooden stakes and a sunlight emitter. Awesome, right? How to explain Stark’s lack of vampiric abilities during his entire history? I blame the booze.

In the upcoming Guardians of the Galaxy: Volume 2 film it will be revealed that Ego the Living Planet (as played by Kurt Russell) is the father of Star-Lord. Well, in the comics, Star-Lord has a daddy so maybe Marvel could give this planet with a face another superhero for a kid. The goatees are similar, Stark has an ego the size of a planet, and it’s surprisingly easy to picture a big Tony Stark head floating in space. Oh, and this would open the door to building a planet-sized armor!

I mean, the planet’s name is Ego. With Iron Man’s infinite hubris, that’s way too perfect to ignore, innit?

Whaaaaat? Thanos, the Mad Titan, wielder of the Infinity Gauntlet, Mad God that Once Brought About the End Time, as Stark’s daddy? You know that Thanos is going to star in like fifty more major crossovers in our lifetime, and each one could have been made more dramatic if Stark called Thanos daddy. And that would make Stark and Gamora half brother and sister! And they once had sex! Eww! Wait, this went to a bad Game of Thrones-like place.

Sometimes, Stark is a bit cold and robotic. Maybe that could have been explained if it was revealed that his real daddy was a robot. The original android Human Torch is Marvel’s first hero, a character that predates Captain America. As Tony’s dad, the Torch could have finally became the major player in the MU that he has long deserved to be. How could an android have conceived Stark, you ask? It’s because (say it with me now) the Human Torch is fully functional and anatomically correct. A Star Trek joke AND a penis joke. You get your money’s worth around here.

This could have added a whole new layer around the original Civil War, huh? Steve Rogers is old enough to have sired Tony. He’s charming enough that it would be hard for Stark’s mama to resist those baby blues. I know what you’re saying: “But wait columnist at The Source, wouldn’t Cap still have been frozen in ice when Tony was conceived?” And I say, if those Cap and Bucky slash fiction people can have their thing, I can have this! Don’t you judge me!

So, any more ridiculous suggestions?