Home COMICS Five of the Worst Comic Book Mothers Ever

Now that the Mother’s Day celebrations are over and we’ve successfully counted down the best comic book mothers ever, isn’t it only fitting to pay tribute to those that didn’t really do so well in the parenting department? Because checking out the worst comic book mothers ever will only make us appreciate our awesome mothers more, here’s a list of the mommies who fully embody #parentingfail.

Sure, Jennifer Lawrence made Mystique a likeable hero in the latest X-Men films, but in the comics, the shapeshifting mutant is an assassin who killed her own first child by going back in time and shooting him dead.

After having an affair with Azazel, she bore a mutant as blue as her skin, and because of this, she and little Kurt Wagner were chased down by pitchfork-wielding locals who hated demon-looking abominations. After this, she abandoned her child—it’s no wonder Kurt ended up with the X-Men as Nightcrawler.

And as if that wasn’t enough, she took a then-fragile Rogue in as her own in attempts to manipulate her, only to end up abandoning her yet again when she needed her adoptive mom the most.

If you get together with the World’s Greatest Detective because you find him to be the perfect mate, and then raise your lovechild as the ultimate killing machine, then you definitely deserve to be in the worst comic book mothers list. Talia raised Damian to kill his own father (twisted!) and even had him cloned multiple times, because it’s only common sense to have back-ups, right? It’s no wonder Damian Wayne is an absolute psychopath.

Okay, so she’s just a clone of Jean Grey, and Scott Summers eventually abandoned her and her child when Jean Grey turned up alive somewhere, so maybe it’s normal for Madelyne Pryor to turn into a Goblin Queen hell-bent on opening demonic portals just because. She even offered to sacrifice her son Nathan for her own demonic purposes. Poor, poor Cable. Mother of the Year, anyone?

Once again, Hollywood has toned down Scarlet Witch’s insanity with Elizabeth Olsen’s stellar performance in the Avengers, but make no mistake—Wanda Maximoff is one of the worst comic book mothers ever. She not only married a machine (sorry, Vision), but she also used Mephisto’s soul to fashion herself some children, and then promptly erased almost all mutants from existence with a single sentence. ‘Nuff said.

From Alan Moore’s masterpiece Watchmen comes two moms who definitely top the list for the worst comic book mothers ever. Sally Jupiter, a.k.a. the first Silk Spectre, was a sexually promiscuous superhero whose rapist hit on her daughter and nobody even thinks it’s twisted. Oh, and did we mention that said rapist, The Comedian, is the father of her daughter? Yep. Twisted. 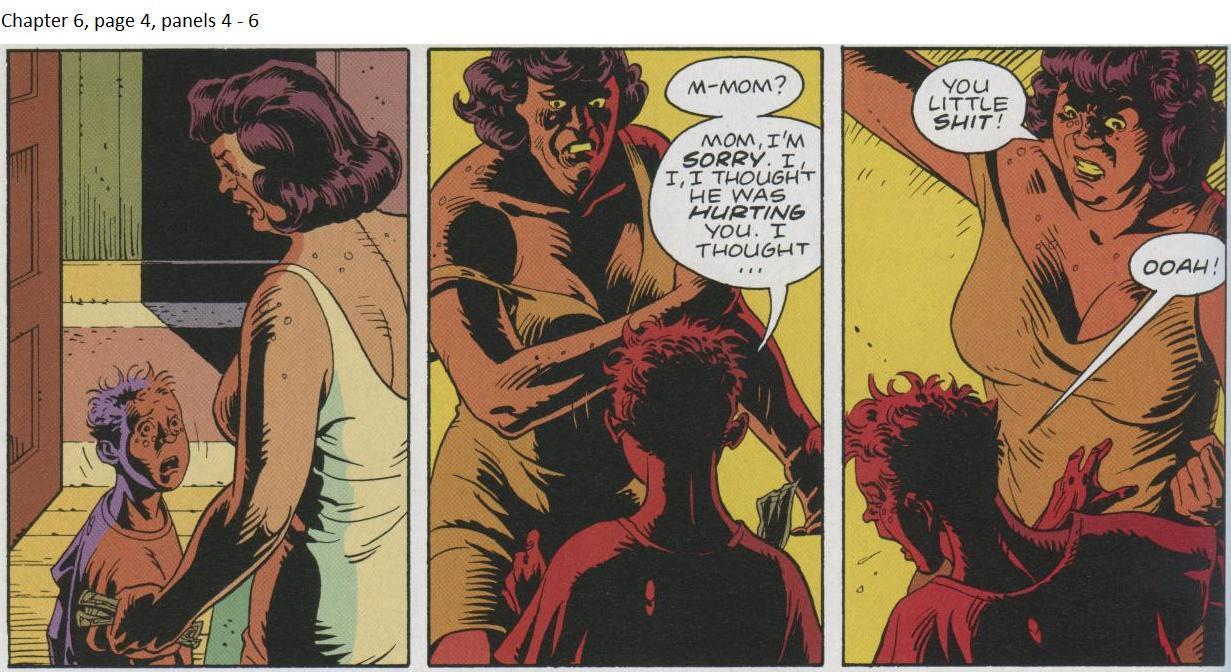 Rorschach’s mother, Sylvia Joanna Kovacs, is just as awful. How else will Rorschach turn into the violently insane “hero” that he is if he wasn’t constantly beaten by his mom whenever he intruded on her nightly sexual business? But then again, without that tragic childhood background, Rorschach wouldn’t be half as interesting, would he?

Who do YOU think are the worst comic book mothers? Doesn’t this list make you want to run back and hug mom as hard as you can because she’s just so darn awesome compared to these crazies?