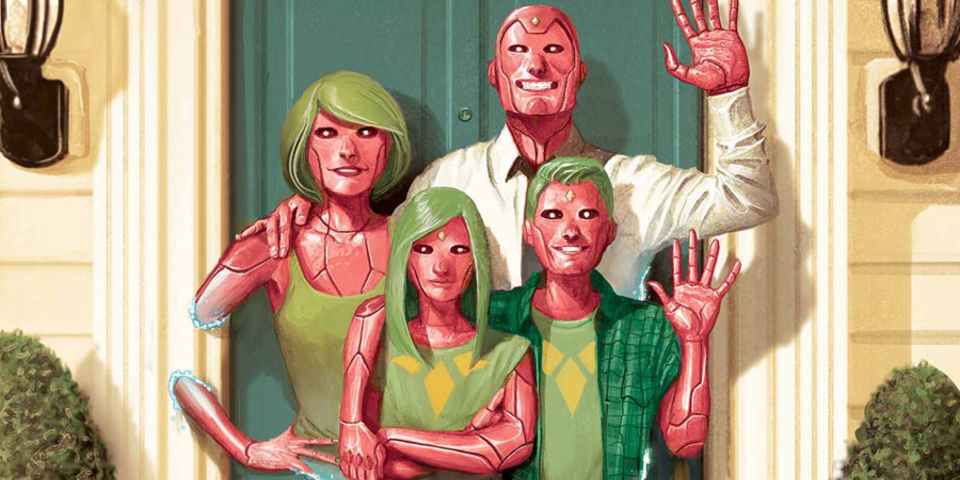 A Few Spoilers Ahead (Nothing Major)!

Recently, one series has rocked the comic book world to its core, featuring one of Marvel’s greatest and underrated Avengers, Vision. Written by Tom King, the acclaimed writer behind Vertigo’s The Sheriff of Babylon, and drawn by Gabriel Hernandez Walta, Vision has become one of Marvel’s best comics currently being published. If you don’t believe it, The Source has compiled a short list featuring the 6 reasons to start reading the Vision series!

For the first time in his publishing history, since his introduction in 1968, Vision is starring in a regular, not limited solo series! But for this series, he is not alone! Much like the 80’s series, Vision and the Scarlet Witch, the story focuses on much more than just himself; this time, the story follows Vision and his android family trying to fit into normal, human life in a suburb just outside of Washington D.C.

While Vision is away with the Avengers, his wife, Virginia, attempts to abide by her housewife programming while their children, Vin and Viv, try not to make waves at school. The four shine individually, each unlike the other, but Vision remains the star. Throughout the ten comics released so far, they have faced discrimination, family drama, and more. All in all, what more reason do you need than Vision finally having his own series?

2. Not a Crossover Event

Despite various Avengers making brief appearances, Vision does not conform to major Marvel crossover events, such as Civil War II. As heroes fight each other against potential world-ending consequences, Vision writer, Tom King, focuses on his own story and hasn’t been required to participate in any major crossovers…so far. In doing so, King has woven a beautifully interconnected narrative with his four main characters, building to an epic conclusion to be released at the end of his run in Vision #12. While the debate over crossover events and their need rages on, King and his team have not been concerned, writing their own story in their own world for all readers to enjoy. As far as standalone series go, The Vision is the best at Marvel Comics right now.

As mentioned before, the Vision series concerns itself not only with the titular character but with his family as well, allowing for King to explore familial drama in new, clever ways. Since these characters live in world of heroes and villain, their drama will always be different than our own. Strangely enough, there are moments within Vision where the characters thoughts, feelings, and actions hit pretty close to home.

For instance, Virginia, the mother, demonstrates her willingness to do anything for her family on multiple occasions, usually resulting in unexpected, tragic consequences. However, that does not mean we miss out on the typical comic book drama, which King provides in moderate doses. After all, what would a comic book be without a struggle between good and evil?

One of the traits of brilliant writers lies in the ability to connect unrelated stories together. Personally, it is one of my favorite techniques. By connecting the current narrative to another popular story, event, or even something that happened earlier in the story, it can illuminate aspects of the main narrative hiding in plain sight, revealing unseen emotions or undisclosed motivations. Additionally, this referencing technique can be used to foreshadow future events or consequences, or better yet, it can mislead readers into making false conclusions about the eventual consequences of the climax, ultimately taking them by surprise.

In Vision, Tom King uses this referencing technique multiple times, but one of the best instances involves his reference to the master of language himself, William Shakespeare. After Vision’s son, Vin, begins to focus more on his studies, he becomes obsessed with Shakespeare, reading it constantly in his room. During some of these readings, King lets artist Gabriel Hernandez Walta and colorist Jordie Bellaire shine by simply referencing lines from Shakespeare’s works as something in Vision’s world happens before us. In Vision #5 specifically, Vin’s English teacher reads a passage from one of Shakespeare’s poems as the reader witnesses the visual aftermath from Vision #4’s twist ending.

One of King’s other fantastic traits as a writer stems from his use of narration, which is featured heavily in Vision. As an avid comic book reader, I personally love clever narration in my comics. While our eyes move across the panels, taking in the art one glimpse at a time, the narration, by a character or even the writer, keeps us intrigued, cluing us in to things unseen or unspoken. Of course, no one will do it better than the greats like Alan Moore, Frank Miller, and even Chris Claremont, who have used narration at Vision effectively.

Although the best instance of King’s narration lies in the twist of Vision #4, a much more vivid example can be found just after in Vision #5: As Vision is being confronted, not only about his activity as an Avenger but as an android, he poetically recounts the 37 specific times he saved the world. The man before Vision sees no reason for his existence, yet Vision, ironically, reminds himself how wrong he is. All he has to do is let the man know.

6. An Exploration of What It Means to Be Human

Although the main characters are all androids, Vision is largely a work exploring what it means to be human. Best of all, King is exploring humanity through non-humans, providing an unusual but delightful twist on the narrative. While even we, as humans, find it hard to describe what it means to be human, Vision has taken that difficulty a step further. If humans cannot, how could androids even attempt to understand? Sure, they may be smarter than us, but can androids feel and think the way humans do? Should they? Throughout the story, King has asks these questions and more, peering into the essence of humanity and Vision’s psyche unlike any comic has done or dared before.

All in all, if you are not reading Vision, you should. The Source HIGHLY recommends that you do! It’s funny, serious, enlightening, clever, and even heartbreaking. It is every genre of literature rolled into a comic book based around one of Marvel’s most underrated and largely unexplored characters, Vision.

Be sure to keep checking back with The Source for more recommendations, reviews, editorials, and breaking news!